Incompetent Teenage Superhero Sidekick
Mika Macklin aka ShoutOut, is one of the four tritagonists of Danger Force. She was introduced in the Henry Danger episode, "Escape Room", along with her brother Miles. She is one of the new sidekicks of Captain Man after the final of Henry Danger.

She was portrayed by Dana Heath.

Mika is fun, optimistic, charismatic and upbeat. She thinks out loud and is relentless with her honesty. She's the team captain, the project manager, and the most likely to succeed. She's the do-Gooder of the GroupMe and has the most common sense. Sister of Miles, she loves her brother, but thinks he is an insecure phony. 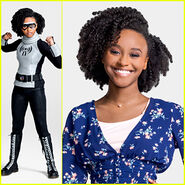