Inhaling bathroom smells such as the smell of isopropanol (rubbing alcohol).

Stop Ryota Mitarai from brainwashing the world with hope (succeeded).
Atone for her actions as Ultimate Despair (ongoing).

Mikan Tsumiki is the characters featured in Danganronpa 2: Goodbye Despair.

After catching Despair Disease in Chapter 3 and regaining her memory, she set up a plan to murder Ibuki Mioda, who also contracted Despair Disease, but ended up murdering both Ibuki and Hiyoko Saionji after the latter witnessed her attempt to murder Ibuki. She had murdered for “the sake of her beloved”. But in reality, Mikan, including Ibuki and Hiyoko, are still alive.

To see her villainous/opposite side go to this link.

Mikan is a young woman in her early twenties, around 22 at youngest. Her virtual avatar in the Neo World Program appeared as her 17 year old self. She has long, choppy, dark purple hair that is cut unevenly as a result of bullying. She has light, greyish-purple eyes. There is a beauty mark under her left eye's corner. She wears a nurse uniform which consists of a pale pink, collared short-sleeved shirt with puffed sleeves.

Mikan wears a white apron over this which is tied behind her neck with a ribbon. There are two red lines on the left side of the apron, one going down to her middle and another, short red line perpendicular to the vertical one. A short pale blue pleated skirt is visible under her apron. Mikan has bandages wrapped around most of her left arm and right leg. Additionally, she has a band-aid on her left knee cap and wears white socks and shoes.

During her high school years, she wore Hope's Peak Academy uniform. She had a band-aid on her right cheek and bandages wrapped around her right leg and left knee.

As the Ultimate Despair, she wears white nurse clothing along with a hat. She has bandages wrapped around her right arm and left leg. She wears one elbow length medical glove on her left arm, as well as a glove on her right hand that only goes up to her bandaged wrist.

Mikan suffers from extremely low self-esteem as a result of severe abuse and bullying. She is easily intimidated, cries easily, apologizes a lot, and stutters over words. She constantly worries about bothering, boring, or offending others, even going as far to ask Hajime Hinata whether it would be alright to remember his name during her introduction. She is very skilled at reading people's faces, but she over analyzes them and is quick to conclude that she is disliked by those around her. Her fragile personality makes her an easy target for Hiyoko Saionji's cruelty.

Mikan is also ridiculously clumsy and often ends up in embarrassing and revealing poses, leading her to apologize profusely (it is heavily implied that she exaggerates her clumsiness on purpose to gain sympathy or attention). She frequently offers to allow others to beat, strip or do other bad things to her so that they won't hate her, as she believes it's better to be treated badly than ignored. She thinks that people who don't bully her don't care about her existence at all and she is sometimes confused when others are kind to her. Despite this, she can become very attached to those who treat her kindly, such as Hajime Hinata and her beloved, developing a love like and pathological relationship with the latter.

During Chapter 3, Mikan recovers her memories, causing her to turn back into an Ultimate Despair, with a drastic personality shift. She becomes angry, manipulative and dangerous. She is bitter and clearly aware of her maltreatment, blaming other people for her change in personality and transition to Despair. Unlike before, she calls the others out on it - even those who defended her, angrily asking why everyone always hates and bullies her. During the trial, she turns increasingly unstable and repeatedly asks to be forgiven in a way that resembles a mantra, but also sinisterly denies her charges and angrily pulls her hair. She claims that her motive for murder was simply love and she doesn't care about anyone or anything but her beloved one, as she believes that her beloved one is the only one who loves and accepts her.

Mikan adapts quickly to her environment through altering aspects of her personality to suit what she had projected as their thoughts. However, before the memory recovery, Mikan was primarily self-effacing for the benefit of others and to reduce conflict; after the disease, she is cunning and deceptive in order to preserve herself, even at the cost of the others' lives.

Mikan's violent and sadistic side is present in her non-despair state, as well, though it is much more hidden. During the second trial, she mentions that she finds a quick desire to kill quite understandable. In Island Mode, she mentions that she enjoys horror movies because of all the blood and helpless people. During Chapter 2, she has a short angry outburst out of nowhere, and she claims that she says "weird things" when she's nervous. She has a disturbing liking for syringes and shots, and repeatedly offers them to Hajime when she gains access to the Pharmacy, and even chases him around with a syringe in one of her Free-Time Events. She is also mentioned to creepily stare at Hajime and he sometimes had a feeling that she is forever watching him from somewhere.

Mikan became a nurse so she could have power and control over sick and injured people. In her Island Mode ending, she openly contemplates rendering Hajime an invalid so he can stay with her forever. However, he convinces her that he'll stay regardless, so she doesn't need to do that..

After awakening from her coma, Mikan reverts to her original personality, and Junko's brainwashing was undone. She is shown to feel guilty for her actions as an Ultimate Despair, and decides to atone along with her other classmates. 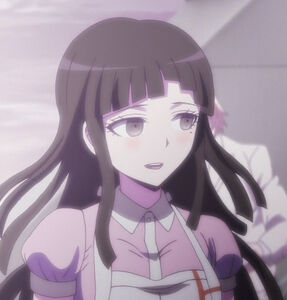 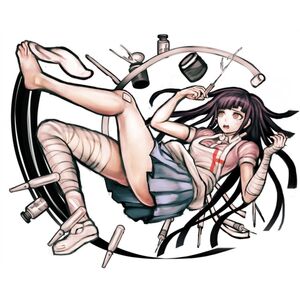 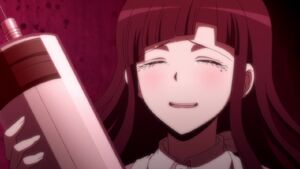 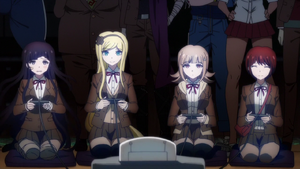 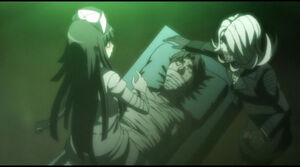 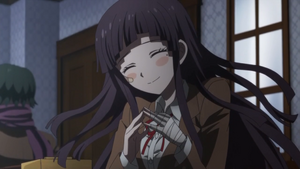