Lead guitarist of The Indigo-Go's

Mikau was a Zora hero in Termina's Great Bay in the videogame The Legend of Zelda: Majora's Mask.

Mikau was a hero of the Great Bay who fought pirates and protected the Zora however he was fatally wounded while trying to save Zora eggs from the pirates who stole them to use as blunder. Link encounters Mikau in the sea dying and drags him to shore and hears his final request to save the eggs. Upon playing The Song of Healing for him, Mikau's spirit will move on and his body will re-coalesce as a mask. Putting on the mask will allow Link to inhabit Miaku's form and use the body as a means to get around quickly, save the eggs and make contact with the Zoras. Mikau was apparently a lead guitarist for the Zora band The Indigo-Go's and famous around Termina for his playing. In addition to completing Mikau's unfinished business with the Zora eggs Link will need to attend to Mikau's role in the band and help his band mates including his love interest and the layer of the eggs Lulu, it's main singer. 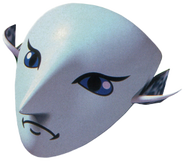 Link assuming the form of the Mikau.