Spend time with his family and friends.

Mike Asparagus is one of the supporting characters of VeggieTales. He is the husband of Lisa Asparagus and the father of Junior Asparagus.

He have white eyeballs with black pupils. He has green hair and his body is green, even his nose.

He is appears opposite Junior whenever a video requires a father figure.

In Larry-Boy! And the Fib from Outer Space!, Junior is having a tea party with his friend Laura Carrot, he accidentally breaks his dad's decorative bowling plate (which prompts Laura to leave immediately). After meet Fib, he ask Junior what happen his plate after saw it break Junior sing "It's Larua's Fault" and believes this and leaves to go call Laura's father. After Junior telling truth, Fib disappears and Junior apologizes to his dad for breaking the plate, admitting that the reason that he lied was because he was afraid that he would be mad at him. Dad admits that he figured Junior that breaking the plate was just an accident, and tells him that. From now on, he wanted Junior to tell the truth about things like that, which Junior promises to do. 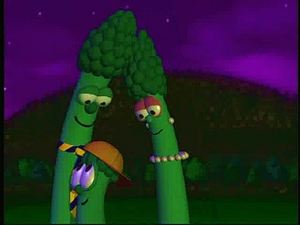 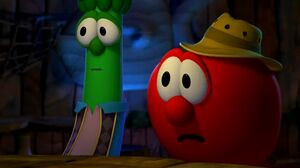 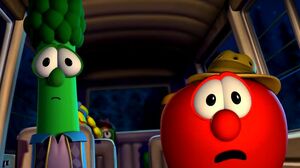 Retrieved from "https://hero.fandom.com/wiki/Mike_Asparagus?oldid=1988624"
Community content is available under CC-BY-SA unless otherwise noted.