Save the world from Trakeena and evil threats.

Michael "Mike" Corbett was the one who pulled the Quasar Saber containing the Red Lost Galaxy Ranger powers, and was the one intended to be the Red Lost Galaxy Ranger. However, an ensuing battle forces him to hand the saber to his younger brother, Leo Corbett as he falls into an abyss to his assumed death. However, he is later revived and becomes the second Magna Defender after the original Magna Defender sacrificed his life to save Terra Venture. He is the hexagonist in Power Rangers Lost Galaxy.

Mike was one of the security personnel assigned to the space station Terra Venture, acting as Commander Stanton's second in command. During a training exercise, he encountered a girl named Maya, who had emerged through a spatial rift from the planet Mirinoi. Accompanying her, he and several others pulled the five Quasar Sabers from their stones. Furio, who was attempting to take the sabers, became enraged and began turning the planet into stone. As they attempted to escape, Mike fell into an abyss that Furio created. Mike was able pass his Quasar Saber to Leo before he fell. Inside the abyss, he encountered the Magna Defender and allowed him to enter his body.

Mike's spirit influenced the Magna Defender by causing him pain when he did something that was morally wrong. The Magna Defender later freed Mike by sacrificing himself. When Leo considered giving Mike the Red Quasar Saber back, Mike refused, saying it was Leo's destiny to become the Red Ranger. The spirit of the Magna Defender later appeared to Mike and gave him a Morpher that allowed him to become the new Magna Defender, telling him that it was his own destiny. Mike became a Lost Galaxy Ranger. Terra Venture attempted to escape the Lost Galaxy by entering through an open portal. The portal was closing and the station was not fast enough. Mike sacrificed his powers, and nearly killing himself in the process, to hold open the portal long enough to let the space station through.

Mike, along with the rest of the Lost Galaxy Rangers, returned to help the Mega Rangers defeat the Armada once and for all. He went back to Mirinoi afterwards. 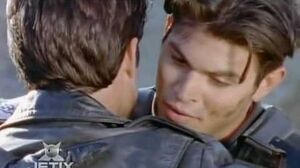 Mike and Leo reunited
Add a photo to this gallery

Retrieved from "https://hero.fandom.com/wiki/Mike_Corbett?oldid=2132410"
Community content is available under CC-BY-SA unless otherwise noted.