Heroes Wiki
Register
Don't have an account?
Sign In
Advertisement
in: Mature, Attack On Titan Heroes, Male,
and 30 more

Member of the Survey Corps

Section Commander of the Survey Corps

Cleanse the world of Titans. (failed)

Mike Zacharias was a supporting protagonist in the anime/manga series Attack on Titan. He was the Section Commander of the Survey Corps and the commander of Squad Mike. He was considered to be the second strongest soldier in the Survey corps, right after Levi Ackerman, Mike had a remarkably good sense of smell, which allowed him to detect Titans from great distances.

He was voiced by Kenta Miyake in the Japanese version of the anime and Jason Douglas in the English version, the former of whom also voices All Might.

Mike was an acknowledged leader with a brave heart and a tactical mind. He was a loyal member of the Survey Corps and an adamant vanguard for mankind's freedom, believing humans can only lose when they stop fighting.

During times of ease, Mike was shown to be a quiet man, rarely speaking unless it concerned a more serious matter. He also had a bizarre habit of "sniffing" people out when he met them. However, fellow squad leader Hange Zoe claimed he was a very capable leader, despite this strange habit which Hange claimed probably meant nothing. He also cared a great deal for his squad, as he took on a great deal of Titans to allow them more time to escape.

Despite his courage, Mike proved to have a breaking point, and met his end when faced against The Beast Titan and a group of Titans.

Mike is first introduced when he, Hange Zoë, and some Military Police soldiers escort Eren Yeager to the military courtroom for his trial. During this time, he takes a few moments to sniff Eren and then smirk. After escorting Eren to his trial, Mike observes the proceedings with Levi, Erwin and Hange. Following the trial, the four officers meet with Eren privately to formally welcome him to the Survey Corps.

Mike participates in the Survey Corps' 57th Expedition Outside the Walls, taking part in the corps' first attempt at apprehending the Female Titan. Once she is caught by the special target restraining weapon, he and Levi attempt to carve her out of the Titan's nape but are unsuccessful. As the soldiers prepare explosives to use on the Female Titan, it begins screaming and Mike is alarmed to smell Titans nearby. He informs Erwin that multiple Titans are approaching from all directions. On Erwin's orders, Mike and the other soldiers attempt to stop the oncoming Titans from devouring the Female Titan, but they are forced to give up and retreat.

Clash of the Titans arc

While a second attempt at capturing the Female Titan takes place in Stohess District, Mike's squad is tasked with investigating the 104th recruits for any possible accomplices to her. Smelling approaching Titans, Mike sends Thomas to inform Erwin that Titans have appeared inside Wall Rose and mobilizes his squad to depart. Seeing Nanaba distraught by the possibility of Wall Rose being breached, Mike orders her to not give up hope, reminding her that humanity can only be defeated when the will to fight is lost. After ordering the others to escape and warn the surrounding towns, Mike takes on nine Titans by himself in order to buy them time to get away.

Mike manages to kill five of the Titans before he encounters the Beast Titan. The Beast Titan grabs Mike's horse and throws it towards him, forcing Mike to dodge it and inadvertently jump into the mouth of a Titan, crushing his legs. The Beast Titan orders the Titan not to eat Mike so it can question him. The Titan ignores the command and the Beast Titan crushes its head and begins questioning Mike about his manoeuvring equipment. Mike is too shocked to respond, causing the Beast Titan to become impatient and simply steal his gear before abandoning him. Mustering his courage, Mike tries to fight back but the Beast Titan allows the surrounding Titans to move freely again. The Titans immediately pounce on Mike, ripping him apart.

Mike would go on to appear in many apparitions of Erwin Smith and Levi Ackerman, as a reminder of the friends they both lost in the name of freedom for humanity.

In an apparition of Erwin Smith, were he contemplates his role as Commander of the Survey Corps, he envisions himself standing atop a mountain of corpses of the soldiers he sent to their deaths. In Erwin's mind, Mike lies at the top of the mountain of corpses, staring back at him.

In the Battle of Shiganshina, as Erwin Smith talks to Levi Ackerman about the dwindling hopes of his dream, Mike stands behind him along with many other fallen Survey Corps comrades in Erwin's mind.

During Hange Zoe's conversation with Jean Kirschtein, Mike appears along with the other veterans behind her. Mike's and Erwin Smith's faces appear to be the only ones staring at Hange.

During Levi's contemplation in the forest, Mike appears in an apparition of the comrades he had lost along the way due to the fact they gave their lives to save Eren Yeager

After Eren Yeager's defeat, Mike was shown saluting Levi one final time to thank him for his long accomplishments over the years

Mike is excellent at using 3D Omni-Directional Manoeuvring Gear, he is considered to be the second strongest fighter in the Survey Corps. His abilities are shown during the Clash Of The Titans Arc, where Mike takes down 5 Titans on his own in a flat terrain unsuitable for ODM gear

Mike possesses a superhuman sense of smell, making him able to discern the scents of specific people and indicate whether Titans are nearby.

Erwin Smith -Mike and Erwin had a deep mutual trust because of their long service together, as well as their respect for each other's skills as soldiers. Even after all these years together, Mike found Erwin difficult to read, but he followed his instructions faithfully.

Levi Ackerman - Mike and Levi proved to be capable teammates, complementing each other's excellent fighting skills. Together, they where the strongest team in the Survey Corps.

Hange Zoe - Mike and Hange showed mutual respect for each other and were usually seen working together directly under Erwin. Mike was shown to be quite relaxed around Hange, cracking jokes and sniffing people around her.

Squad Mike - Squad Mike was a major division of the Survey Corps led by Mike (consisting of Thomas, Nanaba, Gelgar, Henning and Lynne) They were placed in charge of the suspected Survey Corps recruits at the time of the Wall Rose invasion. Mike and his squad where seen to be quite close to each other, Mike being both a mentor and protector of the squad. Mike encouraged Nanaba to keep fighting when she was about to give up, while also sacrificing himself so his squad could escape 9 titans. In the end, his efforts were in vain, as almost every squad mike member was killed in Utgard Castle. The only possibly surviving member of the squad is Thomas, who was dispatched to inform Erwin Smith of the Titan breach of wall Rose. His fate is currently unknown, but he is believed to have either died with Erwin in his suicide charge, or to be retired after the destruction of squad mike. 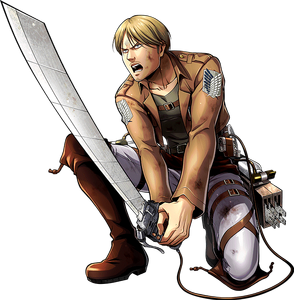 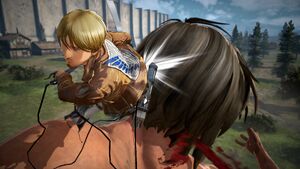