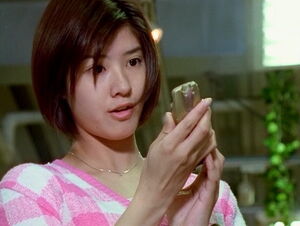 Miku Imamura (今村 みく Imamura Miku) is MegaPink (メガピンク Mega Pinku) of the Megarangers. She is 18 years old (19 as of Gingaman vs. Megaranger, 22 as of Gaoranger vs. Super Sentai and 32 as of the Great Legend War in Gokaiger) and eats a lot, but is very self-conscious about her weight as well. Her forehead symbol is the cell phone, by using the 'Telephone Search' she can track and analyze sound waves. Mega Pink's weapon is a parabolic dish-like gun called the Mega Capture, that can fire supersonic soundwaves.

Miku was one of four students from Moroboshi High (alongside fellow students Kouichirou Endou, Shun Namiki and Chisato Jougasaki) investigating strange occurrences and technology being created at the NASADA plant in connection to the works of I.N.E.T., unknowing that Kenta Date, a fellow student, had already been recruited for their research. When the Nejireiga began their invasion preemptively, the four students and Kenta were all given Digitizers and the task of becoming Megaranger in order to battle the invaders from the twisted realm In episode 17, Miku was hit by an evolution beam by Toad Nejire and became Super Miku or Super Mega Pink. This made the colored squares on her uniform become gold. She gained super strength and intelligence and had access to the other Megarangers' weapons. This later exhausted her. Much to her dismay, its effects were not permanent because her body rejected the enhancements.

Miko returned with her other teammates in 'Gingaman vs. Megaranger' to defeat Hizumina, Gregory, and the revived Balban.

Miku lectured Sae Taiga on the many female warriors and their shared skill at changing their clothes in the blink of an eye, something that Sae had never done before.

Miku is a bright and cheerful girl who hates class almost as much as Kenta, for that reason is probably why they get along so well. She and Kenta often head for the arcade or to get some food. In actuality, she is attracted to Shun. Miku can also get so caught up in something she likes, that she is oblivious to anything else. She loves to eat but is self-conscious about her weight, often vowing to go on a diet but ultimately not going through with it.

Retrieved from "https://hero.fandom.com/wiki/Miku_Imamura?oldid=1783659"
Community content is available under CC-BY-SA unless otherwise noted.