Mikuru Asahina is one of the main protagonists of the Haruhi Suzumiya series. She is a time-traveller from an unknown time in the future sent to watch over Haruhi Suzumiya. Mikuru is the fourth member to join the SOS Brigade, and the only person other than Kyon to join against her will. She is a shy and cute "moe" girl, often harassed by Haruhi Suzumiya. She is secretly a time traveler from the future who came back in time to observe Haruhi. She is best friends with Tsuruya and shows a great talent for brewing tea. Mikuru often has trouble talking to Kyon because many of the things he asks about are "classified". Mikuru is the mascot for the SOS Brigade, mainly as a way to attract attention.

She is voiced by Yuko Goto in the Japanese version of the anime and by Stephanie Sheh in the English version.

Mikuru owns a device called a TPDD also known as "Temporal Plane Destruction Device," (according to the older Mikuru Asahina in "The Disappearance of Haruhi Suzumiya Movie"), that acts like a time machine which brings the user and anyone he or she wished to bring, into the past or future. Mikuru's TPDD was taken by the Older Mikuru in Bamboo Leaf Rhapsody. However, Mikuru miraculously recovers this device later in time. 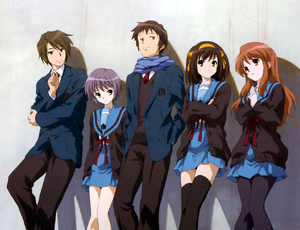 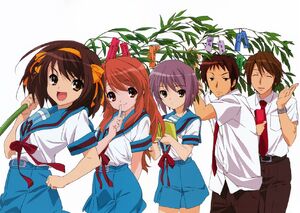 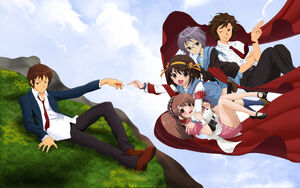 The Vexation of Kyon by PaoPorsche 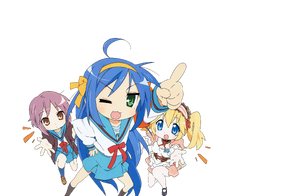 Lucky SOS Brigade (Konata Izumi as Haruhi Suzumiya, Yuki Nagato as Herself, and Patricia Martin as Mikuru Asahina)
Add a photo to this gallery
Retrieved from "https://hero.fandom.com/wiki/Mikuru_Asahina?oldid=1911235"
Community content is available under CC-BY-SA unless otherwise noted.