Teenage Witch
Mildred Hubble is the daughter of Mrs. Hubble, the cousin of Henrietta (Hettie), the owner of Tabby and the main protagonist of The Worst Witch book series and it's television adaptions.

She is a witch, and a student at Miss Cackle's Academy for Witches and later Weirdsister College. She is a good-hearted, but bungling young witch-in-training, who never seems to get anything right. She is friends with Maud Moonshine and Enid Nightshade and has a strong rivalry with Ethel Hallow and Drusilla Paddock. It is Miss Hardbroom who calls Mildred "The Worst Witch".

Mildred is portrayed by Fairuza Balk in the 1986 TV film, Georgina Sherrington in the 1998-2001 series, it's 2001 sequel series Weirdsister College and it's 2005-2006 follow-up series The New Worst Witch (which centres around her cousin Hettie), and Bella Ramsey in the 2017 series. 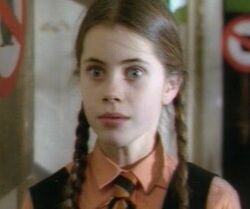 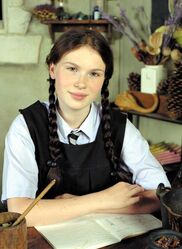 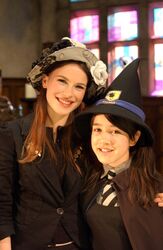 Mildred with her cousin Hettie 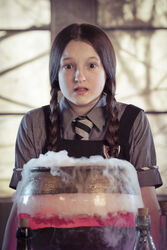 Mildred in the 2017 series
Add a photo to this gallery
Retrieved from "https://hero.fandom.com/wiki/Mildred_Hubble?oldid=1703019"
Community content is available under CC-BY-SA unless otherwise noted.