He is an anthropomorphic yellow fox who can fly with his two tails and quickly becomes Sonic's companion and sidekick. He was shunned on his own planet for his two tails being seen as weird and was left lonely, but was inspired by Sonic after seeing his bravery in fighting Robotnik and joins up with Sonic after learning Knuckles is hunting him down. He is the film's adaptation of Miles "Tails" Prower from the video game franchise.

Tails appears on Earth somewhere near Green Hills at the end of the film. He has apparently been tracking Sonic the Hedgehog using a handheld device and hopes he is not too late to warn him about an approaching threat.

Tails arrives on Earth and attempts to track down Sonic after picking up his signal on his Miles Electric. After arriving in Green Hills shortly after nightfall, he decides to find transportation to avoid revealing himself, and chooses Green Hills Deputy Sheriff Wade Whipple's Ford Crown Victoria Police Interceptor patrol cruiser as his vehicle. He later uses it to save Sonic when he is attacked by Doctor Robotnik and Knuckles the Echidna, driving the two of them to safety while explaining the situation about why Knuckles is after Sonic, revealing that Knuckles believes that Sonic, as Longclaw's protégé, has knowledge of the whereabouts of the Master Emerald. Knuckles soon catches up and begins tearing the cruiser apart, but Tails drives it off a cliff, forcing Knuckles to dig into the cliff face to save himself while the cruiser crashes and explodes on the ground below, while Tails airlifts Sonic to safety and escapes, taking refuge at Wade's house.

While at Wade's house, Tails is with Sonic as he discovers a final holographic message from Longclaw in his map, which entrusts her duty with safeguarding the Master Emerald to him and offering her final belief and wishes that he will succeed and make her proud before the message vanishes, and Sonic's map has changed to show the way to the compass that will lead to the Master Emerald. Despite Tails' hesitance, he agrees to aid Sonic, and they head to Siberia to find the compass. Taking refuge at a Siberian restaurant, despite the cold, hostile welcome from the Russian patrons inside, Tails and Sonic take some time to talk, with Tails revealing that when Sonic unleashed his EMP at the baseball diamond previously, this helped Tails locate him so he could help him.

However, things go south when Tails' Miles Electric accidentally mistranslates what Tails and Sonic say from English to Russian, angering the patrons, who threaten to throw them into the fireplace, before Tails calls out the Russian word for a dance-off in desperation to save his and Sonic's lives. Hearing the word, the patrons hesitate, and agree to let Sonic and Tails face the local champ for a chance to be spared being incinerated. Despite having some trouble at first, Sonic and Tails are able to use their smarts and tech to not only beat the champ and win, but gain the respect of the patrons as well, who grant them quarters for the night at the tavern. That night, Tails ask Sonic if he really thinks of him as his pal, to which Sonic says that he does. Touched by his words, Tails hugs him and reveals that growing up wasn't easy for him because everyone in his village thought that his twin tails were weird, but Sonic has shown him that being weird isn't so bad. Tails and Sonic go to sleep by the fireplace, their friendship having grown into somewhat of a brotherly bond.

The next day, they head to the ancient owl temple where the compass is held. No sooner has Sonic solved the puzzle and they get the compass, they are confronted by Knuckles and Robotnik, with an army of Badniks with them. Tails escapes separately from Sonic, but returns to help him against Knuckles when Knuckles had Sonic cornered on a cliff, though Tails' intervention causes Knuckles to believe Sonic deceived him as Sonic had just revealed that he and Knuckles lost everything on that fateful day when the echidnas attacked Sonic and Longclaw, causing Knuckles to think he had found a kindred spirit in Sonic before Tails interrupted them. Sonic tries to give Tails the compass, but Robotnik intercepts it, before wounding Tails with a missile, which triggers an avalanche, forcing Sonic to save Tails instead of getting the compass back.

With the avalanche bearing down on them, Sonic called Tom Wachowski to have him open an escape ring portal to Hawaii, allowing Sonic and Tails to survive, but Tails is still unconscious. Moments later, Sonic is captured by Commander Walters and his Guardian Units of Nations undercover agents, who take him, Tails, and Tom into custody. However, they are rescued by Maddie Wachowski, but Tails is still in bad shape. Feeling responsible, Sonic refuses any help as he heads to stop Robotnik and Knuckles from getting the Master Emerald alone. Tails recovers and tries to follow, but is still to wounded to help. He later arrives in the Tornado to pick up Sonic and Knuckles after he recovers fully, but after Robotnik had already escaped with the Master Emerald.

Taking everyone back to Green Hills, they arrive just as Robotnik finishes building the Giant Eggman Robot using his newfound powers from the Master Emerald. Tails tries to engage the robot with the Tornado, blasting its heavy armor with machineguns he installed in the plane, but Agent Stone mortally wounds the Tornado with the robot's "Stache Smasher", forcing Tails to bail out before the Tornado crashes to the ground, completely destroyed. Working out a plan with Knuckles and Sonic, Tails is able to initially fool Robotnik with doubles of himself as he infiltrated the robot's head, allowing Knuckles to punch the Master Emerald out of Robotnik, powering down the robot, but causing Tails and Knuckles to fall out and be knocked unconscious.

When they recover, they watch helplessly as the robot, now running on auxiliary power, appears to crush Tom, Maddie, and Sonic underfoot. However, Sonic had absorbed the Chaos Emeralds beforehand, allowing him to become Super Sonic, saving Tom and Maddie, and taking down the Giant Eggman Robot all on his own. After proving he's still himself and in full control of his super state, Sonic releases the Chaos Emeralds and scatters them to unknown locations, explaining to a concerned Tails that he still needs to do some growing up before he can wield their power again.

After Knuckles reforms the Master Emerald, he agrees with Sonic and Tails to become its new guardians, sharing a power-bump with them to seal the deal. After that, Tails and Knuckles move in with Sonic and the Wachowskis, becoming like brothers to Sonic.

In the official prequel comic to the 2022 film Sonic the Hedgehog 2, Tails arrives on Sonic's home planet in hopes of learning about the hedgehog's whereabouts. He stops by Longclaw's old house and scans the area with his handheld device to record a reading of Sonic's energy signature. Upon obtaining the signature, Tails uses it to narrow down Sonic's location to just a few planets before he opens a Ring Portal to a world with strong energy readings.

Unfortunately, Tails soon realises that he is not on the correct planet and discovers that someone was following him by tracking his signal. He decides to accelerate his search in a attempt to lose his pursuer before he is left with only two worlds to choose from. One was a uninhabited mushroom planet and the other was a planet called Earth. Fearful that his pursuer was catching up, Tails quickly makes a choice and disappears through a Gold Ring as another portal opens up behind him.

Tails is a highly intelligent, sweet, kind, and loyal fox who is Sonic's best friend. He is very good at inventing things, as shown by the multiple contraptions in his backpack. He seems to know what human life is like even though he is from another planet, as when he arrives on Earth for the first time, he knows exactly what a car is in the sense that it is used as transportation. He also seems to show little to no fear in dire situations, as shown when he is fighting against Robotnik and standing up to Knuckles. 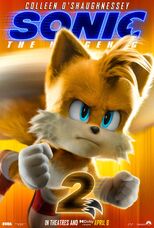 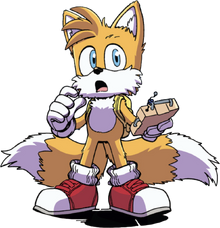 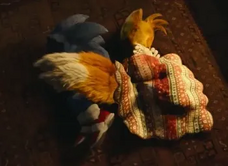 Sonic and Tails sleeping together.