Find out who killed his father in the DL-6 incident.

Find a new way to proceed with his career. (both succeeded)
Always find the truth. (ongoing, normally succeeds)

Miles Edgeworth, is the deuteragonist as well as the central antagonist of the Ace Attorney (Gyakuten Saiban/Turnabout Trial in Japan) series of visual novel adventure video games. He is the titular main protagonist and player character and rival of Ace Attorney Investigations: Miles Edgeworth, and Gyakuten Kenji 2/Prosecutor's Path.

Miles Edgeworth is the Chief Prosecutor of Los Angeles. He currently works to repair the justice system to prevent innocent people from being convicted.

He is voiced by Christopher Wehkamp in the English version and by Masashi Tamaki in the Japanese version.

Miles Edgeworth is the main prosecutor of the first game, with frequent reappearances in subsequent games. By-the-book and skillful, but less than honest at first; he tampered with witnesses and coached their testimony in some earlier cases, although despite allegations in the first game, the only time he used illicit evidence, he had no idea it was forged (but that didn't stop him from using it). He's Phoenix's childhood friend, and his actions in grade school inspired Phoenix's desire to be an attorney.

He then featured as a main character in the Spin-Off series called Ace Attorney Investigations: Miles Edgeworth, taking place between the events of Trials and Tribulations and Apollo Justice. By the time of Dual Destinies, he has become Chief Prosecutor, with duties that generally keep him away from the prosecuting bench.

Edgeworth has grey eyes and dark grey hair. During the Phoenix Wright: Ace Attorney Trilogy and most of the Ace Attorney Investigations: Miles Edgeworth series, he wears a red suit with a black waistcoat, black shoes, and a white jabot tied around his neck.

Edgeworth is usually calm and level-headed, but is typically seen as a snob due to his cold, ruthless, and generally aloof nature. He has a certain lack of social skills and tact, making him very insecure and awkward around others. In fact, he was taught as a child to glare at people who looked at him, unwittingly intimidating them. He also has difficulties with some names, referring to the Global Studios mascot "Mr. Monkey" as "Mrs. Monkey", calling Psyche-Locks "Psycholocks", and referring to the robot Ponco by the name "Panko", despite the latter's numerous attempts at correcting him. Edgeworth dislikes the limelight and often tries to credit other people or circumstances for his accomplishments, and sees no value in awards or trophies. He hates showing his weaknesses, and resists other people's attempts to get involved with his problems.

Although generally loathes to admit it, Miles cares deeply for his friends, going to great lengths to assist them. Though he often insists that Gumshoe and Faraday are little more than nuisances to him, they form a formidable team, and he greatly appreciates and respects their presence and assistance. Nonetheless, he is not always aware that he comes off as cruel or condescending, or even that he is glaring at someone. 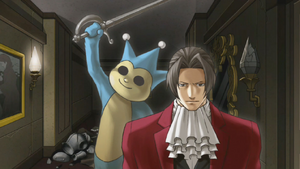 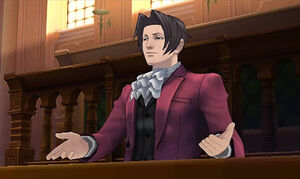 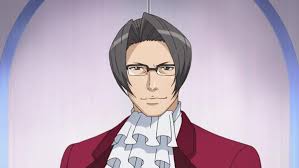 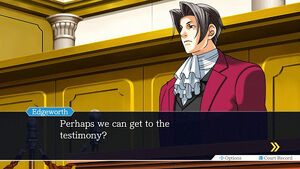 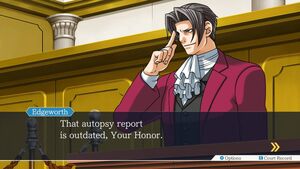