Member of the Danger Force team

Incompetent Teenage Superhero Sidekick
Miles Theopholis Macklin, also known as the superhero AWOL, is one of the four tritagonists of Danger Force. He was introduced in the Henry Danger episode, "Escape Room", along with his sister Mika. He is one of the new sidekicks of Captain Man after the final of Henry Danger.

He was portrayed by Terrence Little Gardenhigh.

Miles is a cool, calm, and supremely confident individualist. He has a deep soul and believes he is destined for greatness. He is the calm in the storm. He sees the events in his life as steps along his destined path. Nothing surprises him and he never panics. He's also the brother of Mika and he thinks she tries too hard and needs to let the path guide her.

As AWOL, he wears a yellow and black suit with a logo on his chest that resembles a fist. On his face, he wears a black mask with a yellow line on top. 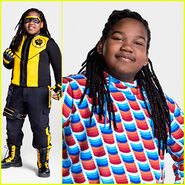