A 15-year-old teenager, he is a friend of Peter Parker and the son of NYPD Officer Jefferson Davis. Peter befriends Miles after his father's death, introducing him to the non-profit F.E.A.S.T. shelter so he can serve as a volunteer. Miles is unaware of Peter's secret identity as the masked vigilante Spider-Man, whom Miles idolizes. After got bitten by a radioactive spider, He eventually gains spider-like powers himself, prompting him to reveal this to Peter, who then reveals that he is Spider-Man.

He is portrayed by Nadji Jeter, who also voiced Sam in The Last of Us, and played Miles Morales in Spider-Man 2017 TV series.

Miles was born in Brooklyn, New York City. He is the only son of police officer Jefferson Davis and teacher Rio Morales. Miles developed an inclination for technology at an early age, taking apart his family's vacuum cleaner at the age of five. As a teenager, he and his friends developed a phone app that allowed them to hack into almost any technology, even military-grade equipment.

Players first take the role of Miles during the And the Award Goes to... mission, where his father is killed while protecting the gathered crowd from bombers from the Inner Demons. He manages to find his mother, helping pull her from the rubble, and then ultimately finds his father's body. While Miles is found by the Inner Demons, Mister Negative decides to spare his life. Miles understandably has trouble dealing with his father's death, brushing off Peter Parker's attempt to console him at Davis's funeral. Remembering his own experience losing his father figure, Peter has Aunt May reach out to Rio, hoping that working at the F.E.A.S.T. shelter will help Miles process his grief.

Miles is working at the shelter when the prisoners escape from Ryker's Island and The Raft, as he is helping Aunt May with those sick from Devil's Breath. He becomes trapped with her inside the building after the convicts set it ablaze, before Spider-Man arrives to save them both. In a twist of irony, Miles then has to save Spider-Man with the help of Mary Jane Watson.

Later, while on a supply run for more medicine, he comes across Rhino and Scorpion of the Sinister Six. His information leads to their apprehension after he successfully sneaks away.

While helping out at the shelter later on, Miles is bitten by an Oscorp genetically modified spider that escapes from Norman Osborn's secret lab; it ultimately imbues him with abilities like Spider-Man, which he then reveals to Peter. Peter then reveals his secret identity to Miles.

Miles calls Peter during the Black Cat incident, asking about getting some training for his powers. While Peter is unwilling to let Miles jeopardize his life by following in his footsteps, Miles admits that he accidentally used his powers to show off in basketball. Promising not to do it again as long as Peter trains him, Miles manages to convince Peter to consider it. During the Maggia gang wars in Episode 2: Turf Wars, it's revealed that Peter has indeed begun giving Miles training lessons in his powers. Bolstered by the newfound knowledge he is learning, Miles contacts Peter about doing hero work. His questions are gently shot down by Peter, who warns him about the responsibility associated with his powers. Not heeding Peter's warning, he tries jumping off of a bridge, breaking his toe in his process. Peter reiterates his previous statement about being responsible and Miles promises to do better. Peter then agrees to meet Miles that weekend for another lesson.

Miles is a selfless and intelligent young man who repeatedly puts himself at great risk for the people he cares about. He is shown to be as brave as his father, Officer Davis, not thinking twice before helping someone, sometimes, even putting himself in danger. This is shown when he saves a civilian from Ryker's escapees, or when he is assaulted and tries to fight back.

Upon gaining his powers, Miles is shown to be both simultaneously confused and excited, constantly asking Peter if he could provide any aid to the latter's vigilantism. Miles also tends to make jokes, asking Spider-Man if he had a phone in his suit. 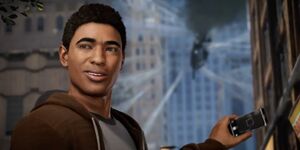 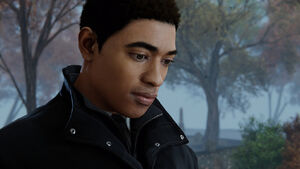 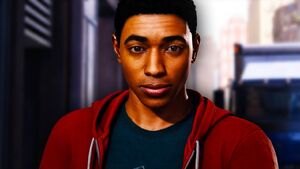 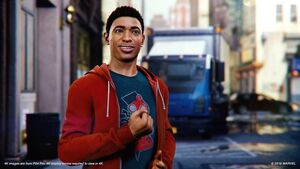 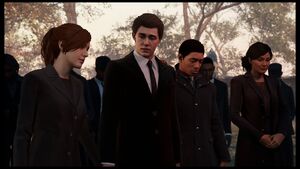 Miles comforting Peter at Aunt May's funeral with MJ and his mother. 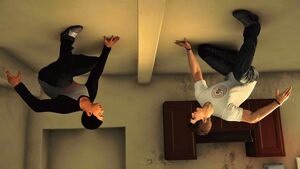 Miles learning that Peter is Spider-Man. 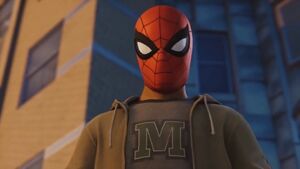 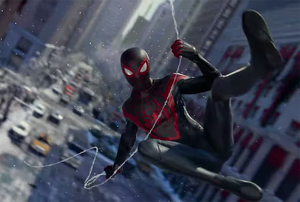 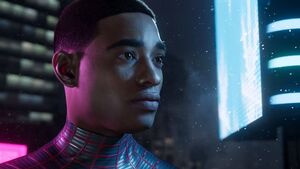 Miles without his mask. 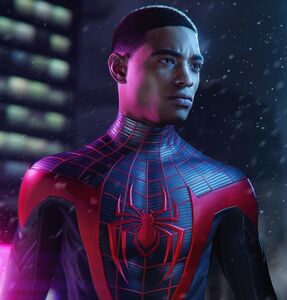 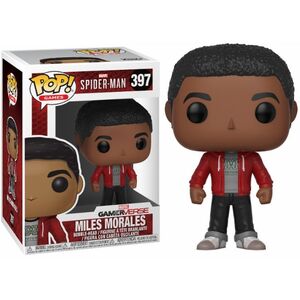 Miles Morales's Funko Pop.
Add a photo to this gallery

Retrieved from "https://hero.fandom.com/wiki/Miles_Morales_(Marvel%27s_Spider-Man)?oldid=1915869"
Community content is available under CC-BY-SA unless otherwise noted.