Millia Rage is a heroine from Guilty Gear. She fights with the skills of an assassin, using her magical hair as a weapon.

Millia has long flowing blonde hair and blue eyes with dark eyelashes. Millia's typical outfit consists of a white blouse with light blue hemlines and a collar that covers the whole of her neck; there are also two straps that run across her collar bone right above her breasts. She also wears padded arms and whole length gloves. She also wears light blue headband across her forehead and her legs are also bare.

Millia's hair in the in game stance is seen tied in a ponytail, but given its properties, it changes shape frequently, from cut short to very lengthy.

In Guilty Gear Xrd -SIGN-, Millia's design has drastically changed, as she now wears a yellow blouse with black hemlines, complete with a matching hat that has a sign saying "zl-28" and "13", black leggings, and peach colored ballet shoes.

Millia's hair in the in game stance is seen tied in a ponytail, but given its properties, it changes shape frequently, from cut short to very lengthy, and can make decorative flowers.

Millia is a complex character, who was molded by her past as an assassin and her relationship with Zato-1. She's elegant, feminine and very lady-like in manner, but does not hesitate to fight when necessary. Despite this, she is a kind person under her cold exterior, especially to children, since she was an orphan. Even when she was an assassin, Millia shows this by refusing to kill a 2 year old king of Calronia, which led her to leave the Assassin's Guild and betray her lover Zato-1.

Because of Zato's manipulation of her feelings, she is now very untrusting, particularly to men, as shown by her battle quotes. She appears as a lonely and detached individual, living alone and refusing help from anybody. At one point, she was even obsessed in killing Zato-1 to settle her past. Even so, she has a positive outlook in life and is emotionally strong, wanting to move forward despite her past. She is also a deep thinker contemplating about her life in many instances. Despite isolating herself from people, her interaction with her admirer implies that she secretly wishes for affection, but is just afraid to form new relationships.

Born of Russian descent, Millia lost both of her parents at an early age. It's unknown at what age, due to her relationship later with Zato, but at some point she was forced into joining the Assassin's Guild. She didnt want to be an assassin, and tried to kill herself several times, each ending in failure. The sixth Forbidden Beast (A.K.A. Forbidden Magics), Angra was placed in her body, specifically her hair, though she was an unwilling participant in this practice. Zato-1 willingly allowed the Post-War Administration Bureau to implant, the Fifth Forbidden Magic, "Shokusei Kagejin", by sacrificing his sense of sight.

Millia and Zato-1 eventually started a comlicated relationship; In Zato's case, it’s less about “love” and more about “obsession” with her as an ideal Assassin. Though in part Zato is physically attracted to her, the feelings she had for him, though present, were forced under a great deal of duress and stress. He only valued her as an Assassin, not as a woman, or a lover, though to some extent he had feelings for her he could not admit to having in his role as Leader.

Millia’s feelings on the other had went through a number of changes. At first it was as if they had grown up together like siblings, growing even closer due to the fact both bore a Kinjuu (though Zato chose his fate, Millia did not). Once given the brutal truths that an Assassin is fated to die, Millia grew fearful of Zato’s so-called “love” for her. She did not want to live in such a cruel world, and wished to seek out a future on her own. Zato still supported her, even in the times she actually BETRAYED him (much to his and Venom’s dismay). Somehow Millia sorts out her feelings when talking to the “First Assassin” known as Slayer.

Slayer reminds her that anyone can choose to die. Choosing to live is much harder and takes a lot more resolve. Choosing to live for the sake of others even more so, be they human or otherwise. After learning this truth, Millia steels herself to the reality that being an Assassin will eventually lead to death, but that she doesn’t have to choose that path, even if it means being forever on the run from the Guild.

Her desire for freedom led to her betrayal to Zato, fleeing the Assassin's Guild and cooperating with the International Police Force to give away the Guild and Zato's location, if in exchange she would be acquitted of all charges of assassination and removed from all formal and informal bounty lists. Zato was indeed caught and placed in a locked up in a Dimensional Prison, with his Forbidden Beasts powers sealed away. This eventually led to his descent into power, madness, and excessive obsession with killing her for his imprisonment. This was all resolved at the end of the 2nd Sacred Order Tournament (Guilty Gear: The Missing Link).

Upon hearing of Zato-1's escape from the dimensional prison, Millia uses the Second Holy Order's Fighting Tournament as a method of tracking down Zato, determined to end his life once and for all. Manipulated much like the rest of the cast, the bloodshed from the Tournament releases Justice from her slumber. However, she is promptly destroyed by none other than Sol Badguy.

Still in search of Zato-1, Millia hears mention of a Gear with free will. Panicked countries give this Gear a bounty of 500,000 World Dollars to he who captures, dead or alive, the aforementioned Gear. Millia uses this as yet another chance to find Zato. Canonically, the former assassin finally finds Zato, seemingly ending his life. Unknown to her, Eddie takes control of Zato's body thereafter, having been slowly gaining control over Zato since the bonding with its master.

After the "death" of Commander Gear Dizzy, as well as Zato-1, Millia continued living in her familiar solitude. However, it was not long before she received sightings of a being similar to that of Zato's Forbidden Beast, Eddie. Encountering many familiar, as well as new, faces along the way, Millia once again confronts Eddie.

In XX, Millia has three different endings, all of which conclude upon her search for Eddie. In the first, Slayer bars her path just before she is about to confront Eddie. After a fight, Millia manages to hold her ground, but is unable to defeat him. Slayer then "reveals" to Millia that her hair is of the same origins as Eddie, though Millia replies that "[she] knows this better than anybody". In the second ending she manages to defeat Slayer and pass on through to then subsequently kill Eddie; fatigued and relieved, Millia returns to her new life. The third ending is very similar to the second, albeit with a much brighter outcome. After killing Eddie, she buries Zato's body, leaving her hair and Zato's blindfold as a memento. She thanks him, and leaves.

Millia sets off to find and kill Eddie and destroy the Assassin's Guild once and for all. After slaying Eddie, she finds out that her hair was "releasing", what could mean losing her magical powers and maybe Millia's death. She finds out even if she kills Eddie, the Guild will not cease...

In her first ending, she managed to finish her vendetta, as she slays Eddie and remembers his last words to remember his existence. She continued to live on a run from the Assassin's Guild, but did not falter in her mind and continues to keep her hair under control. In the second ending however, she completely lost control of her hair and ended up accidentally killing Bridget. As she stood horrified on her act, she was accidentally stabbed in the back by her fan, killing her, but she felt content as she died as herself, not a monster.

Millia continues her quest to find Eddie only to run into the rest of the Guilty Gear cast, in which she is surprised how much trustworthy some have become. Nontheless, Millia rushes through her quest. Before she participates in the 'Four assassin guild brawl', she has a 'chat' with Zato-1 through Eddie, maliciously remarking that she's tired of seeing his pathetic remains around. After dispatching Eddie once and for all, Gig appears and attacks her. Millia states how Gig somewhat reminds her of being much like it. In her ending, she stands in a field in a mourning dress, looking down on a little stake with Zato-1's headband hanging from it. She asks herself if this is what Zato-1 tried to show her; what would happen to her in the future if she continued her burdensome path. Judging by her ending artwork, her hair is now at shoulder length, assuming she has now made peace with Zato-1 and has given up fighting. It should be noted Dust Strikers is not canon to the overall Guilty Gear storyline.

Millia's gameplay focuses completely on melee and speed. Millia has the most simple attack controls, allowing the player the advantage of using multiple special moves. Due to her low defense, the player must make up for it with continuous attacks. When it comes to Millia, defense is secondary.

Millia is also one of the characters that can easily build tension with her move Lust Shaker. Although the attack is fairly easy to block, if it gets a successful hit it can go as high as a 15 hit combo. The player can also maneuver across the screen with moves such as Forward Roll and High-Speed Drop. Her overdrives are also simple to pull off, the easiest being Emerald Rain which fires three discs, though it causes no real damage unless all three discs hit, and her best moves are Winger and Aerial Winger though this move would require the player to have some experience playing Millia as it has a limited range. Millia allows much versatility in the game by combining speed with rush attacks, which leads to devastating combos.

In her EX mode, Millia gains more aerial moves: Pretty Maze and Secret Garden can now also be used in the air, and as an added bonus, the large cast delay of the latter is reduced greatly. As such, Millia makes one of the best choices for any one who wants to focus on aerial attacks.

Millia uses her magical hair that is amorphous in nature and can transform to help in melee combat and ranged combat the many odd shapes it has taken in game include a sword, a harp, a unicorn etc. Her hair can also allow her to fly turning into wings. Aside from her hair, her training as an assassin has added to her combat abilities. 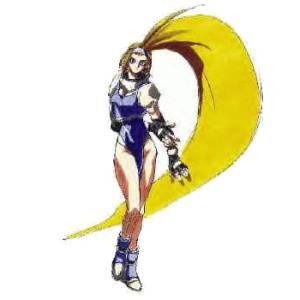 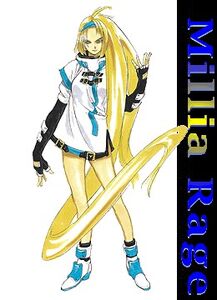 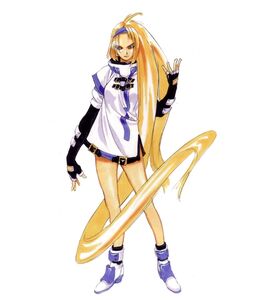 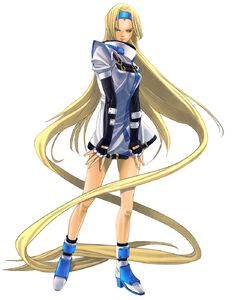 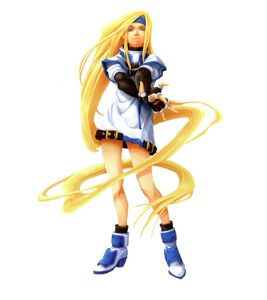 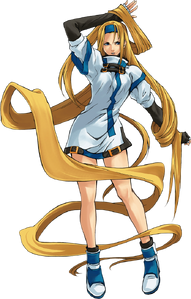 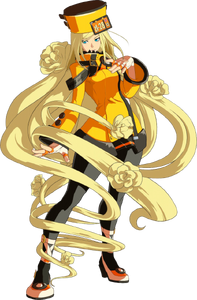 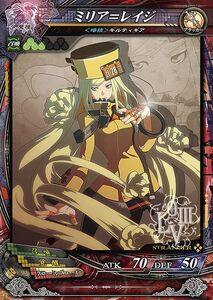 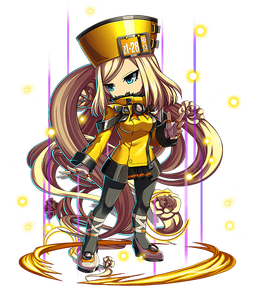 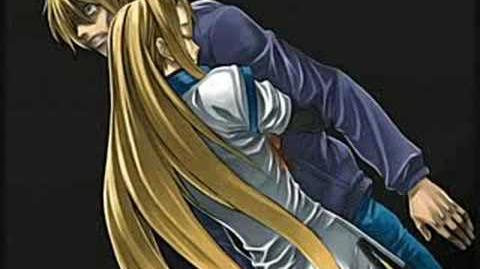