Member of the horsemen tribe (in early childhood)

Kill Corvus to avenge his family and people (succeeded; indirectly)
Escape from the apocalyptic disaster of Pompeii by the volcano (failed)

Milo is the main protagonist of the 2014 historical film, Pompeii. He is a slave, who was turned gladiator. He fights to protect Cassia from the corrupt senator Corvus and escape the disaster of Pompeii of 79 AD.

The character is portrayed by Kit Harington, who also portrays Jon Snow in the Game of Thrones.

Milo has black hair of medium length, wears short beard and mustache. He uses black gladiator outfit. He has well-built body, which can be especially seen during his fight on the arena in Londinium.

For his whole life, Milo remains under traumatic events from his childhood, when his both parents and all compatriots were slaughtered during the Celtic Rebellion by Quintus Corvus and his men. What’s more, he has barely survived it, and did it by pretending dead and lying in hole with dead bodies for some time. When he walked away, he was almost immediately captured by slavers, becoming slave, so conclusion might be done, that his mental state was heavily influenced by all of his childhood experiences. As a gladiator, he was capable of performing ruthless fighting, but has some limited social abilities. Yet, he is able to find a common language with Cassia first, and then Atticus. After that, Milo started to open up to both of them, which signals that he, in fact, kept and developed reasonable social relationships, and he treats killing on the arena as something he must do as a gladiator. Although, pursuing a mission to avenge his parents' death, he initially blames Romans as a whole for that, he quickly changes his judgment for Cassia, learning that she is stalked by Romans as well, after which he shows sympathy towards her, and definitely falls for her after she has saved lives of his and Atticus' on the arena. When they were caught by Corvus’ men after ride on Vires on the hill outside Pompeii, Milo refuses Cassia's suggestion to leave her and run away, stating, that she would have to pay too high price, and insists he takes the blame, as her “hijacker”. During eruption of Vesuvius Milo does not escape right away, stays in the town and follows after Cassia to save her. When escaping volcano's pyroclastic flow, their horse has thrown them to the ground and Milo was ready to stay behind, asking Cassia to ride Vires alone. All that is a proof, that Milo, similarly to Cassia, is honest, honorable, can show affection and is ready to the highest sacrifice for people he loves.

As a child, Milo and his parents belong to the tribe of Celt men who were able to ride and understand horses. One night the tribe is attacked and slaughtered by Roman soldiers led by Quintus Attius Corvus. Milo watches his father get killed by the soldiers and later his mother getting killed by Corvus himself. Milo manages to survive by pretending to be dead making the Romans believe the tribe is all dead. The next morning, Milo goes off on his own and is found by a slave trader and makes him his slave.

Seventeen years later Milo, now as an adult, has become a gladiator nicknamed “Celt”, due to his past and his relationship with horses, won a tournament in Londinium. A slave owner named Graecus, who impressed by his performance bought him and took to Pompeii along with his other gladiators. On the way to the city, a carriage carrying Cassia, the daughter of the city's governor and her servant Ariadne passed the group. The carriage ran over a hole in the road and one of its horses has broken its leg and collapsed. Milo demands that he would be released to help the animal, but Graecus' wicked trainer, Bellator, refused until Cassia forced him to release him. Milo managed to end the creatures suffering by breaking its neck. Disgusted Bellator took Milo back to the group. Before leaving, Cassia thanked him for his kind act.

When the group has arrived to the arena’s underground, Milo had his dinner, when two of the gladiators, one nicknamed “Weasel” and the other “Big Thracian”, confronted him as brother of the latter was killed by him in the tournament in Londinium. This caused a fight, which was later stopped by Bellator. Following this, Milo got acquainted with his cellmate, Atticus, who has learned about him from a fellow gladiator. During practice for a new tournament, Milo was fighting Atticus in one-to-one combat, but during it Big Thracian attempted to assassinate him. Atticus saved Milo’s life, however, and later he explained, that he did it, because he believes that gladiator should die from the blow coming from the front.

Milo with Atticus and two other gladiators were forced to go to a Roman party, where the guests got to check out them before the gladiator show, which is about to take place the next day. Milo has noticed Cassia for a moment before she was whisked away by her father. A small quake from the Vesuvius frightened one of Cassia's horses, so she made him help to calm it down. After which, he told her about his past and convinced her to ride with him, but they were caught by Roman soldiers. Corvus used the opportunity to make influence on Cassia by treating to kill Milo, but she has managed to convince senator to spare gladiator’s life. Milo was, however, punished by getting whipped fifteen times. After that, Milo was taken to coliseum and Atticus tended his wounds. Milo told him that he is convinced about plan, which gods have for him, and that he saw the man who killed his parents and people. Atticus told him about his own past and how the Romans killed his family. The two have gained a respect for one another and finally made a proper introduction.

The next day, at the games, Milo learned, that the fight is going to be the recreation of the Celt Rebellion massacre, during which his parents and other members of his tribe was slaughtered, and Atticus was made fighting with him rather than against him, as was planned. During the fight, Milo and his fellow gladiators killed all of his enemies. Then, Milo made an attempt to assassinate Corvus, sitting with Cassia and her parents in the spectator’s box, by throwing a broken Roman standard as an improvised spear at him, but Proculus, Corvus' right-hand man, has managed to avert it. Corvus attempted to have them killed, when Cassia intervened and, showing “thumb up”, has blocked to him that possibility, for which enraged senator has sent her away. Atticus was taken away and Milo was set to fight Proculus one-to-one. During the duel, an earthquake occured and Vesuvius erupted, killing many of the audience. Milo and Proculus fell down into the gladiator's quarters and Milo managed to get away by letting out the other gladiators to fight off Proculus and Bellator. Proculus escaped, while Bellator was killed.

Milo has reunited with Atticus, and they found Cassia's parents. Severus was dead, killed by Corvus, and Aurelia was mortally wounded, but before she died, she asked Milo to save Cassia. Milo decided to rescue her and came to villa. He has managed to save her but Ariadne got killed when an earthquake caused her to fall to her death in collapsing house.

Milo and Cassia reunited with Atticus, who revealed, that the harbor has been destroyed, and they need to find another way out. They returned the coliseum to get some horses. Cassia decided to mourn her parents while Milo and Atticus went to fetch the horses. While searching, Milo and Atticus have found out, that the Romans are there, so they armed themselves. They came out to see Cassia being captured by Corvus, who ordered Proculus and the rest of his men to kill them. Then Corvus escaped on chariot, abducting Cassia. Milo and Atticus killed the Roman soldiers except Proculus, whom Atticus decided to fight alone to give Milo more time to rescue Cassia. The two bode each other farewell, promising to see each other again and Milo left the arena.

Milo chased Corvus and Cassia riding Vires, and he catches up to them when Corvus's carriage crashes on the wall of Temple of Jupiter. He fought Corvus and wounded him, when a volcanic bomb hit the temple. Milo used this to ambush Corvus, while Cassia cuffed the senator to his chariot. He told Corvus about his revenge for slaughtering his people and that his gods are coming to punish him. Then he rode with Cassia on Vires, leaving Corvus to die. When they get to the fields outside the town, where the horse got scared by the falling volcanic bomb and forced them off. As the surge from the volcano was approaching, Milo told Cassia to ride without him, because the horse can't carry them both. Cassia refused, and saying, she won't leave him, sent the horse away. Then she held Milo and told him, that she do not want to spend their last moments running, as she knew, that they would not survive the surge. They shared their only kiss as the surge engulfed them.

Milo as a child, captured by slavers. 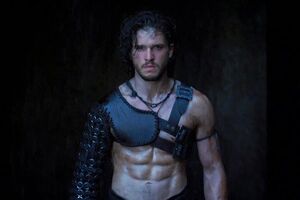 Milo is looking at suffering horse. 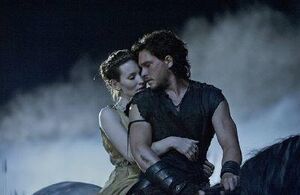 Milo and Cassia on Vires, when overseeng the landscape of Pompeii. 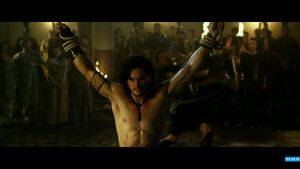 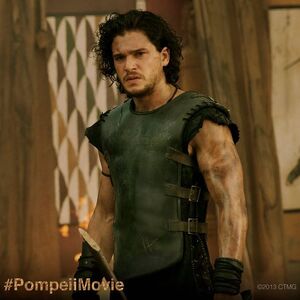 Milo on the arena.

The gladiator games have just started.

Milo and Atticus observe the cloud, which soon would block the sunlight.

Atticus discusses with Milo where to go. 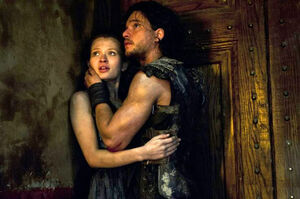 Cassia and Milo in the town, after leaving villa. 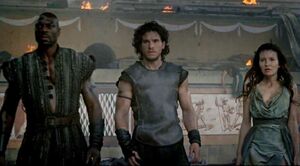 From left to right: Atticus, Milo and Cassia on ruined amphitheatre.

Milo(on the right) in eternal kiss with Cassia.
Add a photo to this gallery 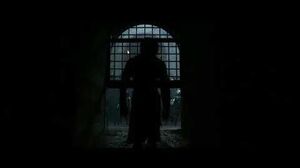 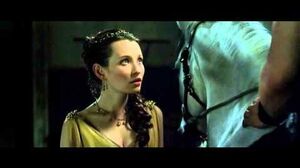 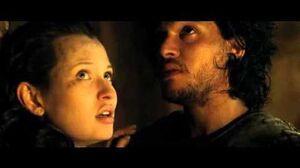 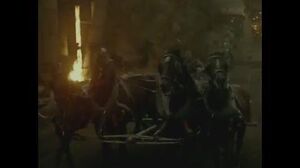 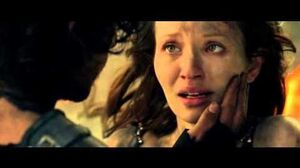 Retrieved from "https://hero.fandom.com/wiki/Milo_(Pompeii)?oldid=1800594"
Community content is available under CC-BY-SA unless otherwise noted.