Prove the existence of Atlantis and restore the lost city to its former glory (succeeded).

Lyle Tiberius Rourke and his mercenaries

Milo James Thatch is the main protagonist of Disney's 41st full-length animated feature film Atlantis: The Lost Empire and its sequel. He is one of the very few Disney heroes who does appear to be endearing, likable, and pure good. He was ordered by Lyle Tiberius Rourke while discovering Atlantis. At the end of the film, he marries Kida.

He was voiced by Michael J. Fox in the original film, and later voiced by James Arnold Taylor.

Milo used to live with his grandfather and listened to his tales about great adventures 10,000 years ago. Milo's grandfather died and Milo started becoming a museum teacher in 1914. He started teaching about folklore and legends to the visitors, as well as Atlantis. Harcourt explains to him that the museum is funding for facts instead of folklore.

Later on, Milo meets a nearby woman named Helga Sinclair at home and later Whitmore who knows his father. Whitmore gives Milo the book to translate about Atlantis and Milo tells him that the ancient world does exist.

Later on, Milo goes on a stop in the caverns of Atlantis after meeting a big insect creature when three natives look at his crew. During bedtime, many fireflies start burning down the tents. Milo and the gang escape from the swarm of fireflies to avoid getting burnt down into the world of Atlantis.

There, he and the gang use Atlantis language to let the natives understand. Princess Kida walks to him and understands his words while on a trip to the King of Atlantis and later on using hieroglyphic language for translation in Atlantis. Kida tells Milo how to swim and find the Heart of Atlantis, which is the true source of power for Atlantis. Milo looks at Kida become ethereal and trapped in the crystal container.

The power of Atlantis is later lost and the King of Atlantis dies. Milo must stop Rourke to retrieve Kida and save Atlantis. Rourke grabs an axe to attack Milo and Helga fell off the balloon, leaving her dead. Milo and the gang save Kida from the erupting volcano before the whole city is destroyed. Later on, Atlantis is restored to peace. Milo accepts her to stay as one of the husband of Queen Kida.

Milo returns in the sequel. The film consists of three shorts that had been meant for a failed television series called Team Atlantis. James Arnold Taylor replaces Michael J. Fox as Milo's voice.

The film's opening reveals that Milo has married Kida, who is ruling Atlantis as its Queen, with him as its King. The two are said to be working together to restore Atlantis to its former glory. When Milo's comrades make an unexpected arrival in Atlantis, Milo learns that a creature called the Krakken, an Atlantean defense mechanism, is reigning havoc in Newfoundland. Together with his comrades and Kida, Milo travels to Newfoundland to stop the creature. They learn that the Krakken has been attacking ships and taking the cargo to a village said to be devoid of spirits, but are able to defeat the Krakken by blowing it up.

It had been stolen by Whitmore's competitor Erik Hellstrom, who now believes himself to be Odin. Milo and the group track him to the Nordic mountains, but are forced to rescue Kida, who is kidnapped by Hellstrom. Hellstrom reveals that he believes Kida to be his daughter, as well as his plan to end the world in Ragnarok. Milo and the others manage to rescue Kida and retrieve the spear after a difficult fight.

At the end of the film, Milo is seen looking on as Kida chooses to combine the spear's power with the power of the crystal to raise Atlantis above the sea, as she had come to believe her father was wrong for hiding it. According to the ending narration, the world was made a better place as a result.

"I think we've seen how effective my decisions have been. Let's recap: I lead a band of plundering vandals to the greatest archaeological find in recorded history, thus enabling the kidnap and/or murder of the royal family! Not to mention, personally delivering the most powerful force known to man to the hands of a mercenary nutcase, who's probably gonna sell it to the KAISER!! HAVE I LEFT ANYTHING OUT?!!!!" 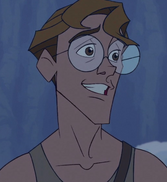 The man behind the character

Lies Not in Ireland Gentlemen But in Iceland

Milo Meets Kida in the Day

Milo and Kida Have a Plan to Save Atlantis

Milo and Kida Spot the Crystal

Milo with Kida in the jungle

Milo and Kida have a plan?

Milo and Kida in the pool?

Milo with Kida in the pool?