Start a Wiki
Mime is one of the characters from the Happy Tree Friends series. He is a purple deer with mime make-up on his face and wears a dark blue-white striped sweater.

A purple male deer with sharp ears, antlers on top and who wears face makeup and a navy blue/dark purple and white, striped shirt. He never speaks, because he is a mime, causing others to have a hard time understanding him. Apparently, most of his possessions are imaginary yet can be stolen (or even shown to be real), as evidenced in Easy For You to Sleigh, Mime to Five, Concrete Solution, Keepin' it Reel, and I Heart U. Sometimes the things around him are imaginary, such as walls in Dunce Upon a Time, which he uses in the name of showmanship. He has even done some seemingly impossible things, such as making an audible honking sound while riding a unicycle in Concrete Solution and making noises while interacting with his 'imaginary' furniture. It was once said that he's mute, but in some episodes, like in Happy Trails pt. 1, Out of Sight, Out of Mime, Something Fishy, Keepin' It Reel, and I Heart U he has made audible noises (e.g., choking noises, snoring, or blowing noises) making it evident that he can speak, he just chooses not to (although he has been known to not scream even when in severe pain as seen in Double Whammy Part 1 when his insides were set on fire). This has led to other characters' deaths, such as in Who's to Flame? when his choosing not to talk to Lumpy, a fireman, over the phone eventually led to the destruction of the entire town.

He is talented with circus skills like juggling (which he can do with one hand) and creating balloon animals, though his attempts to entertain his fellow Happy Tree Friends often have fatal consequences. Mime is very fond of peanuts, going so far as to stick his hand in a blender to eat them. In Mime and Mime Again, Out of Sight, Out of Mime and Class Act he had a tail, however he appears without it in later episodes. Despite this, he has his tail, again, in the most recent Kringle episode, Chill Kringle and See You Later, Elevator.

Mime is usually seen riding a unicycle in Party Animal, Concrete Solution, Who's to Flame?, As You Wish, A Hole Lotta Love, See What Develops, Junk in the Trunk, and Double Whammy. Sometimes, he stays seated on his unicycle throughout entire episodes.

Mime is the only character who doesn't die in the two TV episodes (Who's to Flame? and Mime to Five) he starred in, and he didn't have any co-stars in these episodes. He also survived in Mime and Mime Again, Easy For You to Sleigh, A Change of Heart, Easy Comb, Easy Go,Concrete Solution'' (Debatable)' In a Jam, I Heart U, Chill Kringle,Youtube Copyright School, Random Acts of Silence (Debatable) and in the HTF Breaks Happy New Year, Take Your Seat and Tunnel Vision. He lives in a tent, on which the inside looks like a regular house with invisible or imaginary furniture as seen in Easy For You to Sleigh, and Mime to Five. He dies quick and painless deaths more than any other character except in Happy Trails pt. 1, Home Is Where the Hurt Is, Party Animal and Double Whammy Part 1. Like many other characters' deaths, they usually involve his head, metallic objects or machinery/vehicles.

Seen on Computer and on TV 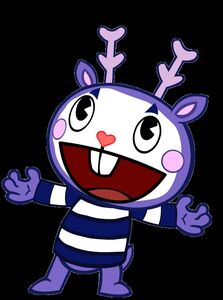 Add a photo to this gallery
Retrieved from "https://hero.fandom.com/wiki/Mime_(Happy_Tree_Friends)?oldid=1645857"
Community content is available under CC-BY-SA unless otherwise noted.