Heroes Wiki
Register
Don't have an account?
Sign In
Advertisement
in: Articles under construction, Infobox Update, Rewrite,
and 16 more

Mimic also known as Calvin Rankin is a mutant in the X-Men series. He was the first nonmutant to join the team. When he was young, Rankin inhaled an unknown chemical which gave him the ability to copy the features and abilities of any other person. At times, Rankin could only retain those abilities as long as he remained within a certain distance of the person he had "mimicked". Since then, Mimic has sometimes been a hero and sometimes a villain.

Calvin Rankin was born in Passaic, New Jersey. After an accidental mix-up of chemicals from his father Ronald's experiments, he gained the ability to temporarily copy the skills, physical traits, knowledge, and superpowers of any person within close range (approximately ten feet). When his father found out about this, he retreated with Calvin into a mine where he worked on a machine which, as he claimed, would make the abilities his son absorbed permanent. But his experiments with the device caused several power outages in the vicinity; in order to hold off the mob which was tracking these disturbances, Ronald Rankin blasted the mine entrance, but he was accidentally caught and killed in the explosion, and his device sealed deep inside the mine. Taking the name Mimic, Cal decided to seek out the X-Men in a plot to get to the machine and make their powers his permanently. Initially he gained the upper hand, but his powers were removed by Ronald Rankin's device, as Professor X had expected. Xavier then wiped his memory and let him go.

It was while attending the same college as Jean Grey that his memory returned. In another attempt to gain the X-Men's abilities, Mimic set his sights on joining their ranks, becoming deputy leader in the process when he blackmailed his way into joining the X-Men. As a member of the team, he soon began to antagonize the other X-Men with his arrogant behavior and ended up expelled after a fight with Cyclops. He later realized his potential when he saved his team-mates from the Super-Adaptoid. This battle robbed him of his abilities, and he left powerless but a better person. Eventually he regained his powers, but they were enhanced to also absorb people's life forces, killing them. As the Beast tried to work out a solution, Calvin seemingly perished in a self-sacrificial fight against the Hulk after absorbing the Hulk's gamma radiation.

For a long time the X-Men believed him to be dead. In actuality, Mimic was in a coma which lasted for years. This ended only when the regenerative mutant Wolverine came near him. Mimic's power copied Wolverine's healing ability and he woke up. Mimic's powers soon began to drain the life energy of those around him again. He fled to a remote Siberian village, where he soon encountered X-Force, who were investigating a distress call. X-Force arrived to find a number of dead scientists and an enraged Mimic, who illogically blamed X-Force for their deaths. During the fight, Mimic copied the power of Sunspot, and their identical charge caused a large explosion, after which Mimic was nowhere to be found.

Mimic constantly emits invisible, psionic waves that perform a full-spectrum genetic scan on anyone within a 10 foot radius of him, allowing him to imprint the personal enhancements of unlimited number of other superhumans/mutants onto his genetic code and retain them until the person he mimicked the power from is over a mile away. This was however until his ability was 'upgraded' and he was then able to retain any and all abilities he mimicked within a matter of seconds. 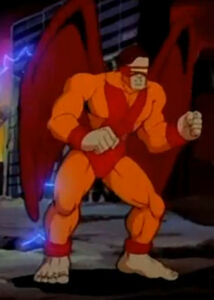 Mimic in the animated series