Heroes Wiki
Register
Don't have an account?
Sign In
Advertisement
in: Articles under construction, Article stubs, Female,
and 34 more

Mina Mongoose is a heroine who appears in the Sonic the Hedgehog comic series and its spin-offs published by Archie Comics.

Mina is a teenaged mongoose who was rescued by Sonic and developed a crush on him. Mina has supersonic speed, but did not feel she was capable of serving as a Freedom Fighter. She discovered she had a talent for singing and went on to become a pop idol. Although it took quite a long time, she eventually got over her crush.

Mina started out as a lonely girl, uncertain of herself, who kept pining for Sonic and tried unsuccessfully to be a Freedom Fighter. Eventually, she grew past her crush and realized her true calling was music. 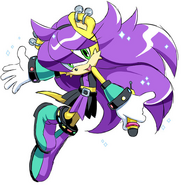 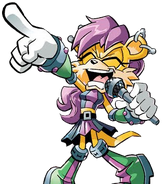