Captain Murasa, The Ghost of the Shipwreck Accident

Ghost, Sidekick of hero
Minamitsu Murasa is the spirit of a young drowning victim who afterwards became a notorious threat due to her power to sink ships. She is currently the captain of the Palanquin Ship, searching for the fragments of the floating vault. She meets the heroine as she is completing the preparations to travel to Makai. Her unique weapons include the anchors she uses, as well as her ladle, which is apparently bottomless, according to an interview with ZUN and her spell card comments in Double Spoiler.

Minamitsu has short, black hair and a teal eyecolor. Her clothes are designed after a regular sailor's outfit, with a white shirt and skirt with blue lines. Around her neck she has a neckerchief. In some of her spell cards she is seen with a green aura, most likely her ghost form. ZUN stated in an interview that the design for Minamitsu was the hardest to finish. He had much more sketches of Minamitsu with different hairstyles and haircolor in comparison to the other characters from Undefined Fantastic Object. He also couldn't decide whether a long or short skirt was better for Minamitsu.

While Minamitsu is a rather fearsome phantom, she is still kind-hearted with a bright personality. Mainly due to her ties with the Myouren Temple she could empathize with humans and her victims, and thus chooses them more carefully. She also chats with the victims she capsizes.

After her death, Minamitsu became a spirit, bound to the ocean due to her lingering attachment to the world. Because of her spite, she eventually became renowned far and wide for capsizing ships. Many feared her, and tried to think of ways to somehow restrict her actions, but it wasn't until the monk Byakuren Hijiri was asked to do something about it that the situation changed. Minamitsu, knowing how famous the monk was at the time, believed she would be able to extend her influence even farther by sinking her, as well, and perhaps even escape her connection to the ocean and attack humans on land.

However, when Byakuren did appear before her on the seas completely defenseless, Minamitsu sunk her ship easily, prompting the spirit to wonder why. Byakuren then reappeared on the surface atop a shining ship, which she had constructed using the ship Minamitsu had died on as a design. Moved by the monk's insight and her own sense of nostalgia, she accepted Byakuren's offer to captain the shining ship.

Eventually, after Byakuren was sealed away, Minamitsu was "buried" into the ground along with her ship. Having been long forgotten, Minamitsu and the rest of the youkai were pushed above ground in Gensokyo by a geyser - likely due to the events in Subterranean Animism - along with the palanquin ship and the fragments of the floating vault.

In Undefined Fantastic Object, Minamitsu meets the heroine as she is making preparations for the ship to go to Hokkai, via Makai, where Hijiri is being sealed. Along with Nazrin, Ichirin, and Shou, she is one of the youkai trying to unseal her. Unlike Ichirin, she learns that the heroine doesn't have any particular motive to help the group, and attacks in order to take the fragments of the treasure back. Though she loses out in the end, she had already placed the ship in auto-pilot, so it was too late for the heroine to escape.

Minamitsu possesses the ability to cause shipwrecks. Her ability appears to be odd compared to a regular ghost, which is because she drowned at sea a long time ago. Due to a certain attachment to the ocean she kept capsizing passing ships. Besides capsizing ships she could also drown anyone near water, which goes as far as drowning someone who bathe in hot spring water, or sat peacefully near a river's edge. This is also why she is seen around places with a lot of water. 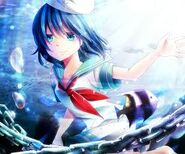