Training with his students.

To keep his son safe from impending doom and to save Konoha.

Minato Namikaze is one of the main supporting characters in the Naruto universe. He was the Fourth Hokage of the Hidden Leaf Village. He was also the husband of Kushina Uzumaki, and the father of Naruto Uzumaki.

In addition to being Kushina's husband and Naruto's father, he was also the father-in-law of Hinata Hyūga, and the paternal grandfather of Boruto Uzumaki and Himawari Uzumaki.

He is voiced by Toshiyuki Morikawa in the Japanese version of the anime (who also voiced Dante from Devil May Cry video game series), and by Tony Oliver in the English version.

Like Naruto and Boruto, Minato have blonde hair and blue eyes. He is tall and is shown to wear the Hidden Leaf Village flak jacket along with a white robe with the Kanji of "Fourth Hokage' written on the back. After his reincarnation with Orochimaru's Summoning: Impure World Reincarnation jutsu, the sclera of his eyes turned from white to black and his body had cracks around his body.

After his death and resurrection, Minato is shown to be supportive of his son, Naruto. He was shocked to find out that the Masked Man was Obito Uchiha. He was willing to hear Obito's point of view and wanted to apologize to Obito for his own loss. After Obito's death, Minato was open to forgiving Obito for all the atrocities he have committed.

When Naruto and Team 7 managed to save the world from Kaguya Otsutsuki, Minato expressed happiness over how much his son have accomplished and his growth.

Minato was born on January 25 in the Hidden Leaf Village, from a unnamed couple. Little was known about his parents, but according to Jiraiya, it was stated that Minato was a very gifted child, and when he attended the Ninja Academy at the age of 6 years old, he was well known as one of the village's genius prodigies. It was there that he met a little girl who was an outsider named Kushina Uzumaki. Minato mentioned that his dream goal was to become a great Hokage so that people will look up to and acknowledged him as a hero.

During his childhood, Minato met Kushina when she was transferred to Hidden Leaf Village Academy. He was trained by Jiraiya and mastered the Rasengan and Flying Raijin Jutsu created by the Second Hokage Tobirama Senju but much faster than the Second himself.

As Minato graduated from the academy he was taken under the wing of one of the village's Legendary Sannin named Jiraiya where Minato was able to become much stronger where he even created and mastered his own Jutsus. Years later, it was mentioned that Kushina Uzumaki was kidnapped by the Cloud Ninja. Minato was able to pick off the trail and rescued Kushina. Minato complemented on the beauty of Kushina's hair and the two eventually feel in love with each other and became lovers.

Once Minato reached adulthood, he eventually became a Jonin and a sensei to Kakashi Hatake, Obito Uchiha, and Rin Nohara. During the Third Shinobi World War, Minato and his team were set out to The Hidden Grass Village to destroy the Kannabi Bridge. Since Kakashi was given the Jonin title, Minato had Kakashi led the team while he helped the Konoha's forces on the front lines. After meeting up with the remaining Konoha joint-forces, Minato used his Flying ThunderGod Technique to take out the Grass Ninja who were against them. He returned to his team and rescued Kakashi and Rin from a group of Rock Ninja forces, but he was too late to save Obito. After mourning over the "death" of Obito, Minato helped his remaining team in completing their mission in destroying the bridge. At some point, Minato even battle with the future Raikage of the Cloud Village named A. A few years later, the Third Hokage named Hiruzen Sarutobi retired and Minato was made the Fourth Hokage.

Minato eventually married Kushina and she became pregnant with their first child. While Jiraiya was visiting the couple, Minato complemented on Jiraiya's latest book called The Tale of a Gutsy Ninja and how he admired the determination of the main character named Naruto. Minato along with Kushina desired to name their son Naruto, and in turn, Minato and his wife honorably made Jiraiya Naruto's godfather.

It was revealed that Kushina was the Jinchuuriki of the Nine-tailed Fox and that she was due to giving birth to Naruto. Minato along with Hiruzen and Biwako made plans for Kushina to give birth in secret under the guard of ANBU in a secret hideout away from the village with Minato in control of Kushina's seal.

After his son Naruto's birth, much to Minato's happiness, Minato tried to strengthen Kushina's seal since it was weakening

quickly, but he was interrupted by Obito Uchiha (disguised as Tobi) who came in and killed Biwako and Taji while taking the infant hostage and demanded Minato to hand Kushina to him or his son will die. Minato tried to calm Tobi down, but Tobi states that he was completely calm and throw Naruto in the air. Minato swiftly caught Naruto but found paper bombs in Naruto's wrappings so Minato quickly saved Naruto and the two escaped the building just in time before the explosion with Minato's leg injured with a small piece of wood splinter. Minato realized that Kushina was taken away, so he took Naruto back to their home so he can rescue his wife. Before Kurama (who was under Tobi's control) tried to kill Kushina, Minato arrived just in time to rescue her while Tobi made his escape with the Kurama. Kushina begged Minato to protect the village in which he did, not before taken his wife and child home. Minato then headed out and stopped the Biju from being controlled by Tobi by using a special jutsu release and even battled Tobi with Minato using his Rasengan to take Tobi off guard. Near the end of the battle, the skeptical Minato sees Tobi's identity to be Madara Uchiha, since Minato recognized Tobi's teleportation jutsu as being faster than Minato's and Tobirama Senju's own teleportation jutsu while being able to quickly get pass security without trigging the alarms. Tobi left, not before claiming that he will rule the world and that Kurama will be his again.

Minato then summoned his wife and infant son into the battlefield. Though weaken, Kushina used her Chakra Chains to restrain Kurama and she told Minato that she will take the Biju down with her in death, so that Tobi will not be able to use Kurama in the future. Not wanting his wife to die, Minato attempted to use the Reaper Death Seal Jutsu to seal half of Kurama in Naruto so that when the time comes, Kushina will help Naruto master Kurama's powers to an extreme level when he becomes an adult. Kushina angrily told Minato that she does not wished a heavy on Naruto and asked him why he is giving up his life for her and the village. Minato explained that turning one's back on the village is just as bad as turning one's back on a child and that they are all a family of Shinobi. He even added that there are things that Naruto needed to be taught by his mother that Minato himself could not explain. More importantly, Minato declared that dying for his son is his duty as a father, and he has great faith in Naruto that once he becomes an adult and master Kurama's powers, he will save the whole world from total chaos and bring great peace among the lands and people.

After Kushina's agreement with his statement, Minato summoned the sealing alter and placed his son on it.

Kurama (who was no longer under Tobi's control) saw the whole situation and attempted to kill Naruto so that he will not be resealed. However, Minato and his wife stood in the beast's way and together took the blow with Kurama's claw piercing through them. In his last dying breath, Minato had the Sealing Key taken to Jiraiya and said his last farewells to his son and sealed Kurama inside Naruto along with his wife.

As Naruto attempted to removed the seal to free Nine-Tail, Minato's spirit arrived and restored the seal for the last time.

As Orochimaru undid the Reaper Death Seal, he revived Minato and his fellow Hokage. He announced Hashirama Senju when he revealed as the Fourth. He explained that his death is different than Third Hokage. Minato teleported Ten Tails' Tailed Beast Bomb to the Lake when he arrived to stop the war. After Kaguya's sealed away, Minato wished Naruto a happy birthday. As the Reanimation Jutsu was undone by Hagoromo Ōtsutsuki, Minato returned to Pure Land where he would fill Kushina in on everything about their son.

According to Jiraiya, Minato was one of the most gifted shinobi who ever lived and was also believed to be one of the strongest shinobi that ever existed. His abilities were so far advanced that even the Fourth Raikage thought that no one would be able to surpass him. Anko Mitarashi, in discussion with the Third Hokage about Orochimaru's immense strength and his threat to the village, stated that she wished the Fourth had been alive to face him. At a young age, he was able to single-handedly rescue Kushina Uzumaki from three Kumogakure ninja. During the Third Shinobi World War, flee-on-sight orders were given to enemy shinobi should they ever see him appear on the battlefield. Minato was also capable of counteracting the Nine-Tails' attacks to the point that Tobi found it necessary to intervene and stop Minato directly. Tobi was later forced to retreat due to being severely injured by Minato, but not before commending Minato's skills, stating he was worthy of his title of "Fourth Hokage". Minato's fighting style often excluded time consuming hand seals that give enemies an opening so he often relies on two techniques: the Flying Thunder God Technique and the Rasengan.

Physical Prowess: One of Minato's trademark attributes was his immense speed and acute reflexes, able to react fast enough to catch an infant Naruto mid-fall to prevent him from being stabbed by Tobi. Combined with his great proficiency in the Body Flicker Technique, he could easily react and reach in time an ally to save them from enemy attacks. He could also respond to Tobi's Kamui technique quickly enough to escape it. He is often referred to throughout the series as the fastest shinobi who ever lived, with the speed of the currently fastest living shinobi often being compared to his own, such as A or Naruto in his Nine-Tails Chakra Mode, with the former admitting that even with his Lightning Release Armour enhancing his already immense speed and reflexes was still outmatched by Minato., In the anime, when Minato went to save Kushina from abduction, he managed to swiftly defeat four Kumogakure shinobi in closed ranged combat, all of them almost twice his size. When fighting, he mainly employed the use of his unique kunai, wielding them proficiently and taking advantage of their particular form, which made them even more suitable for close range combat than standard kunai. Using this type of kunai, he was able to nearly sever one of the Eight-Tails' tentacles when B moved to save his brother from Minato's counter-attack despite having nearly no leverage, showing that he possessed a great deal of strength. 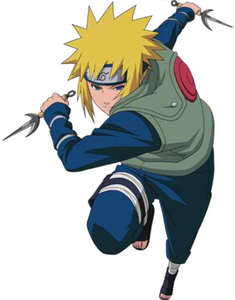 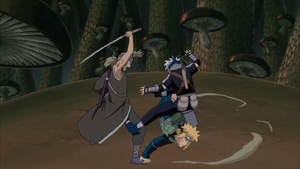 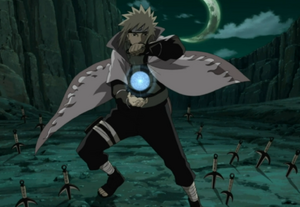 Minato demonstrating the dynamic creation of a Rasengan. 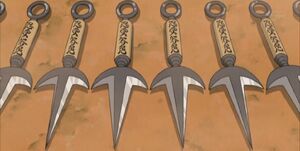 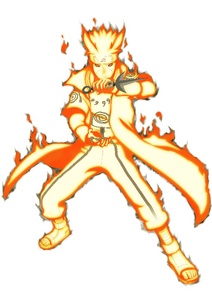 Minato in his Nine-Tails Chakra Mode. 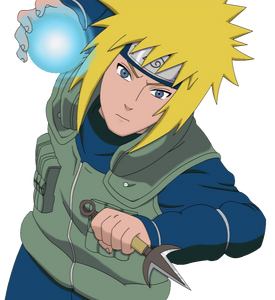 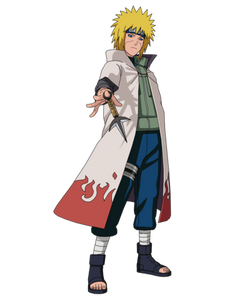 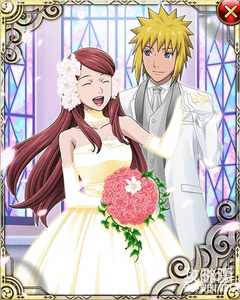 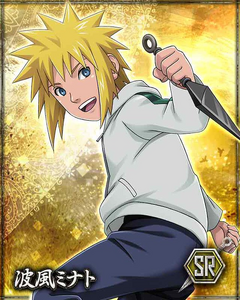 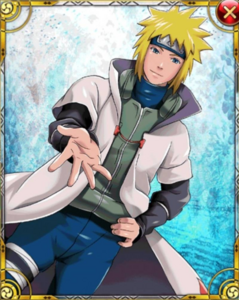 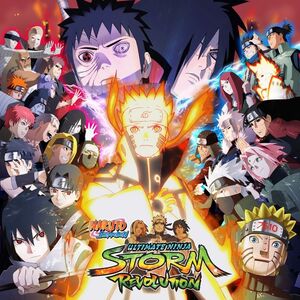 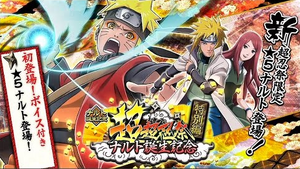 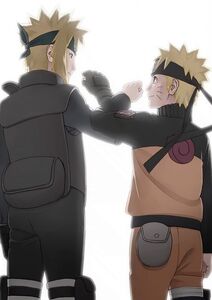 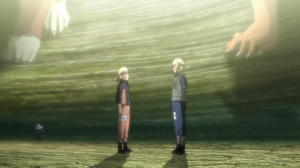 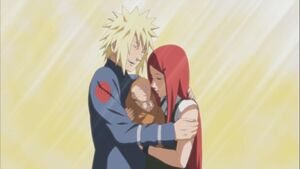 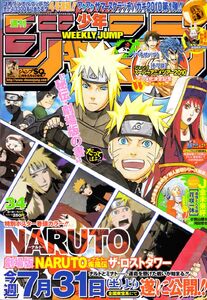 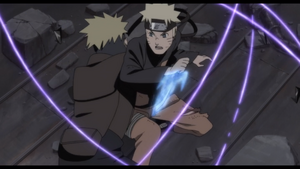 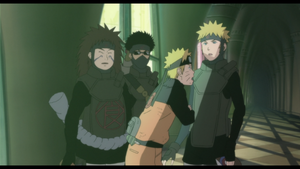 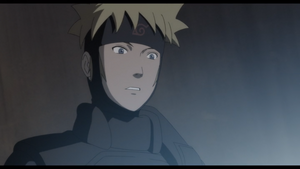 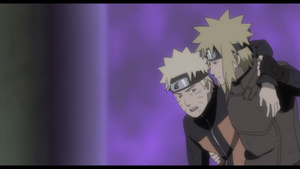 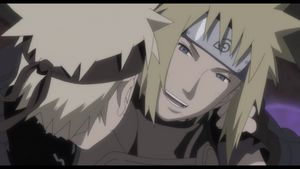 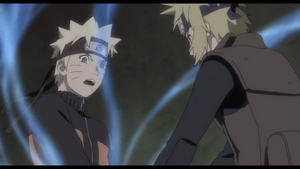 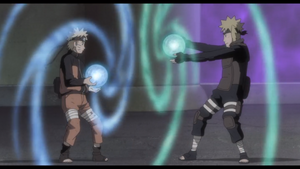 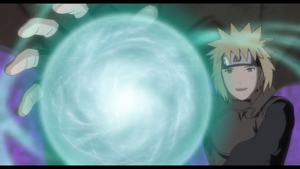 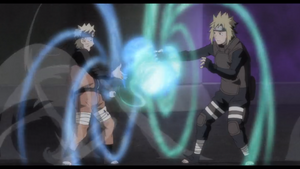 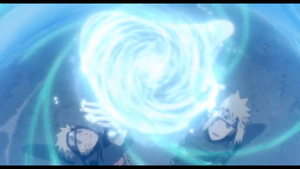 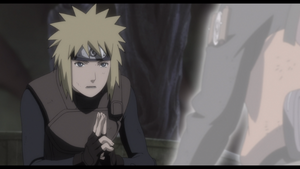 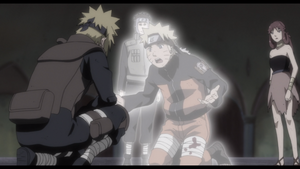 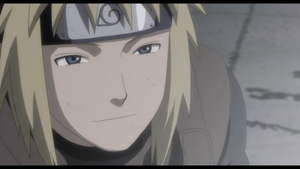