Ashikabi of the North

Helping out at Izumo Inn
Studying

Minato Sahashi is the main male protagonist of the manga/anime series Sekirei. He is a 19-year-old boy who, at the start of the series, has failed the college entrance exam for the second time in a row. His life is completely changed when he meets a mysterious girl named Musubi and discovers that she's a Sekirei and he's her Ashikabi, a Sekirei's destined partner. He is then forced to participate in the Sekirei Plan, where all Sekirei are forced to face off against each other.

Minato is a tall, slim young man with messy black hair, gray eyes, almost always wearing a white shirt and blue jeans. There are occasions when he wears a blue jacket over his white shirt but that happens only when he heads out together with his Sekirei. Minato also seems to have a likable appearance in the Sekirei universe as according to Homura, Minato has the facial expressions and gesture of a good person

For most of the series, Minato's most defining trait is his complete lack of self-confidence. Having failed the college entrance exam twice in a row, he believes himself to be a completely ordinary person with no distinguishing qualities. In reality, he is extremely intelligent and his failures stem from an inability to cope under pressure, as shown when Matsu gave him an extra hard exam and he got every question right. As a result of his insecurities, he initially couldn't understand how he was an Ashikabi, believing that an Ashikabi should be someone special. Overtime, however, he grows to realise how important he is to his Sekirei, and vows to become a person worthy of their affection.

Because of his insecurities, Minato initially has a rather passive personality and often lacks the confidence to go against his own Sekirei when they decide on something. An example of this is when he ordered Musubi and Tsukiumi to avoid the dangerous roaming veiled Sekirei (actually Uzume), he immediately received the opposite reaction and wasn't able to convince them to stay home instead of going after the mysterious Sekirei. Another good example is Tsukiumi refusing Minato's request to participate in the escape plan to help Kuno and Haruka Shigi escape from the capital or Homura who decides that he should be the one to hold on Matsu's stolen Jinki for the time being without asking for Minato's permission. He also frequently laments over his inability to protect his Sekirei, and is prone to blaming himself whenever they get hurt. Minato's mother seems to be the cause of this side of his personality, as it's been stated several times that Minato never had the guts to go against his mother or his sister, who has a personality the complete opposite of his.

Minato is a very kind and caring boy. Unlike many Ashikabis, he often worries about the fights where his Sekirei get involved and shows the utmost care and respect for his Sekirei. He also never gets angry with his Sekirei and tries to convince them that despite his insecurities, he would fight with them and face his fear for his Sekireis' sake. That said, he has expressed several times the desire that even though he participates in these fights, he rather would want to defeat the enemy Sekirei without the use of aggressive violence because he wants to avoid hurting people in the process.

His love and kindness for his Sekirei slowly develops Minato's personality throughout the story into a one more befitting a man, even going as far to go against his own mother in an attempt to protect his Sekirei. Minato is not afraid to show his feelings for his Sekirei, to the point that he fell in a emotional state and cried when he witnessed Musubi's crest disappearing during the first fight against the Disciplinary Squad, showing that he truly cares for his Sekirei which also earned him Kazehana's admiration and feelings towards him.

Minato is also prone to being shocked as shown when Higa of the East believed Minato got all his assets in the Sekirei Plan because he was Hiroto Minaka's son, as opposed to just being a good guy earning his assets by luck and good fortune.

Not much is known about Minato's past, except that Matsu states that he originally is a native from Wakayama and was raised by a typical family. He had top scores from elementary to high school. We also get to know from Yukari, that Minato would always help her out in the past when she would get lost in dark places like a forest, even though he as child feared those places himself. He would often carry her out.

As an Ashikabi, Minato has the ability to allow his Sekirei to gain temporarily a power boost after trading a kiss with them. In the series, the power of an Ashikabi can be determined not only by the number of the Sekirei he or she has in his or her disposal, but by the bond between them which marks Minato as a powerful Ashikabi because of his loyalty towards his Sekirei.

Before the beginning of the third stage, Minato had winged a total number of six Sekireis. Those 6 Sekirei are... 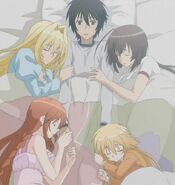