Mine is the tritagonist of Akame Ga Kill!. She is a self pro-claimed "genius sniper", as well as being a sharp-tongued and quick-witted member of the assassin's group, Night Raid. Despite not thinking much of Tatsumi at first, she slowly falls in love with him and eventually becomes his girlfriend and wife. After exhausting all her power to save Tatsumi, Mine falls into a comatose state. In the anime, she dies instead of falling into a coma.

Mine is a girl, with long pink hair, topped by two pink ribbon, and fuchsia eyes. She wears a pink outfit.

Mine is often quick to anger, and easily irritated with those that she does not know well. She had a tendency to tease Tatsumi, due to him being the newest member, and often said he wouldn't last. Despite her cold exterior, she has shown to be a warm and kind girl to those she has opened up to. She shows her compassionate side on one occasion by teasing Tatsumi to get his mind off of the death of Susanoo.

Mine wants there to be no racial discrimination, due to the fact because she is of half-foreign blood, which led her to being targeted by others as a little girl. Over time, she develops romantic feelings for Tatsumi who returns the same feelings and the two having officially entered an intimate relationship.

Since having begun to date Tatsumi, she has shown a jealous side, such as over Leone's usual flirty advances into Tatsumi, as well as lecturing him how he has to refuse such advances firmly as he now has a girlfriend. At the same time, she has demonstrated being very worried about Tatsumi's well being, especially when he has not returned to the hideout (due to having been imprisoned) contemplating how she would have never thought she would become so anxious due to lack of contact with someone.

Mine was born and raised in the western borders of the Empire, into a poor family, at some point of her childhood, her parents died. The girl spent most of her childhood as an orphan little girl who lived on the street, and she was discriminated because she was a half-breed. She joined the Revolutionary Army after learning it was forming alliances with countries from the west. With the promise of a new country where diplomatic relations with the people from the west would improve, she fights so others of her race can be accepted and their children would not go through the discrimination and suffering she had.

One of her earlier missions has her paired up with Tatsumi where she explains to him a bit more about the Empire and the other Night Raid members. They slowly form a friendship, although she'd still tease him. The two remain paired when they go on their next mission: to kill a relative of the Prime Minister; Iokal. While Mine kills Iokal with one shot the remaining members of Night Raid are left to deal with his bodyguards. Tatsumi and Mine retreat as her job is done and while leaving he learns why Mine fights against the Empire. One of the Guards, however, escapes and ambushes Mine, so Tatsumi latches on to the attacker, telling Mine to take the shot (at close range). When she starts to object, he tells her he has faith in her. Mine kills the attacker, and is about to accept Tatsumi before he hits her on the forehead, complaining that she nearly killed him as well. The two return to the hideout, having grown a bit closer after this experience.

Her next mission would have her paired up with Sheele and upon completing their assignment, they encounter Seryu Ubiquitous. During the battle, she would deal with Koro while Sheele goes after Seryu and because of this Mine is grabbed and suffers an injury. Unfortunately, because of this Sheele decides to rescue Mine rather than finish off Seryu. Having saved Mine, Sheele is immediately shot by Seryu and bitten in half by Koro. Clinging onto life, Sheele orders Mine to escape before Seryu's back up arrives and activates her teigu's trump card allowing Mine to escape. Mine returns to the hideout, sharing the bad news of Sheele's demise at the hands of Seryu Ubiquitous declaring vengeance.

During an invasion from Dr. Stylish, Mine comes to Tatsumi's aid as he's overwhelmed by Kaku. Seeing that he wields Sheele's teigu, Extase, both Mine and Tatsumi are angered. Kaku attempts to attack Mine only to be instantly killed instead. Najenda returns with the new recruits, Susanoo and Chelsea who aids in the defeat of Dr Stylish. Night Raid relocates to a new base east of the capital where they are formally introduced to Chelsea and Susanoo. During their time together, Chelsea often teases Mine.

Najenda informs the team of their newest mission, which is to assassinate the empire spy Bolic. Unfortunately, they can't do anything at the moment as the Jaegers are actively hunting them. Najenda develops a plan to lure them outside the capital and battle them head on. On the day of the confrontation with the Jaegers, Mine notes how similar in looks Kurome is to Akame so she wants to spare Akame the pain of having to kill her sister only for her shot to be dodged. During the battle, Mine attempts to take out Kurome again only to be intercepted by Natala and Doya, the pair have an intense shootout with Mine coming out the victor. Mine is then swallowed whole by Kurome's final puppet, the Kaiser Frog. Blasting holes into the frog's body, she is safe from its stomach acids. Both units are forced to retreat after Bols uses his trump card.

Night Raid is posted in Kyroch preparing to finish the Jaegers, Mine is paired with Tatsumi. The pair is able to blend in with population where Mine notes Tatsumi's grown. The group clashes with three of the four Rakshasa Demons head out to some ruins of the city leading to an extended stay in the city. A while later Tatsumi & Mine meet the leader of the Path Of Peace, The Lord who tells them to confess their love for one another instead of bickering. While gathering information outside some ruins, Mine and Tatsumi are ambushed by Seryu and Suzuka.

Tatsumi goes to confront Suzuka while Mine handles Seryu. In their second battle Mine tells Seryu that the irony of Seryu's morals, stating that although she claims to fight for justice, she is no different from any evil person. Mine plans to take her down without mercy. As they battled, she nearly destroys Koro's core, so Seryu has him transform into his berserker form. During this moment, Mine is momentarily defeated until she recalls her past as well her memories of Sheele and Chelsea. As Seryu and Koro descend upon her, the surge of emotions allows her to unleash Pumpkin's trump card and bifurcates Koro as well as Seryu. Mine told her she made her mad which cost her the battle so Seryu's final act was to detonate the bomb inside of her body in a last-ditch attempt to kill Mine unfortunately, Mine is unable to finish Seryu due to Pumpkin being overheated. Mine attempts to escape, but due to her injuries, she cannot move far enough in time. The bomb detonates, which finally kills Seryu and Koro and Mine is saved at the last second by Tatsumi.

A month after her battle with Seryu, she spots Tatsumi about to leave with Lubbock and volunteers to go with him. While investigating they once again meet up with the path of peace leader who sits down to talk with them. He tells the pair about how he came to power and Tatsumi tries asking him if he can sense human darkness. He admits that he can sense some darkness in some of the leaders but since they helped the organization reach as far as it has he has chosen to trust them. Before leaving, the path of peace leader casually comments that Mine and Tatsumi are closer than they were before and that they should treasure the moment.

The day before they attacked Bolic, Susanoo prepared everyone's favorite dishes. Mine received a strawberry parfait. Mine tries to offer Tatsumi some but he was too busy being distracted by Leone to notice her.

Following the successful assassination on Bolic, Mine and Night Raid returns to the capital where Mine and Leone are tasked with surveying and making a map of the underground sewers of the Capital although suffered teasings of her relationship with Tatsumi by Leone. Mine later learns of Tatsumi's capture and planned public execution. Determined to rescue Tatsumi, Mine decides to go alone but was stopped by Akame and Leone with Najenda approving the mission to rescue Tatsumi.

As Esdeath prepares to stab Tatsumi, Mine arrives on time and shoots the execution place randomly while Najenda, Leone and Susanoo arrive on a Air Manta. Mine and Leone then proceeds to battle Budo while Najenda and Susanoo fends off Esdeath.

During the battle, Budo proves to be a hard adversary, incapacitating Leone early as he focuses all her attack on Mine, fatally injuring Mine in the process. Near to her final breath, Mine shoots out a powerful blast from Pumpkin and manages to kill Budo, rendering Pumpkin seemingly damaged beyond repair in the process. Mine and the remaining Night Raid members retreat, with Tatsumi carrying Mine to safety. The two eventually stop near a river at Mine's behest. She confesses her love for Tatsumi and is happy to have fallen in love with him. Mine shares a kiss with Tatsumi before succumbing to her wounds, leaving a distraught Tatsumi to grieve. 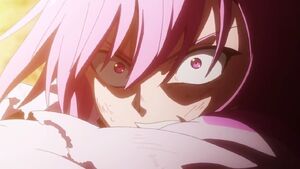 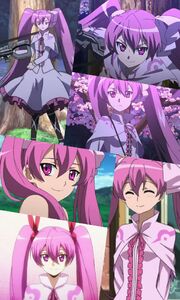 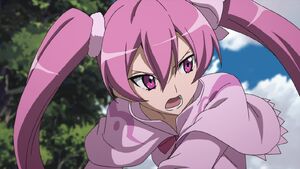 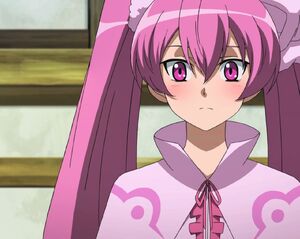 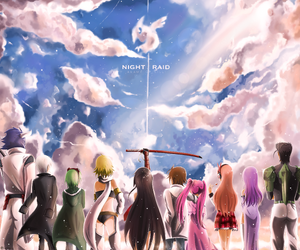 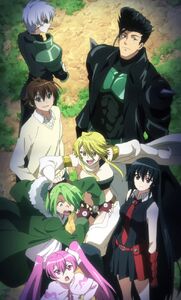 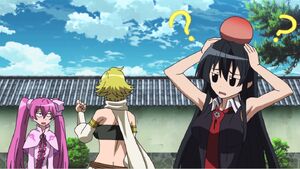 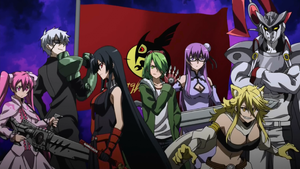 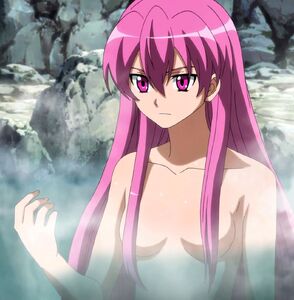 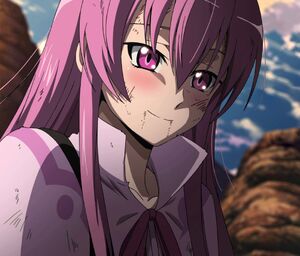 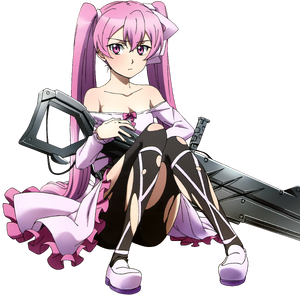 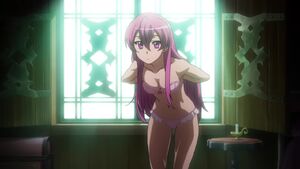 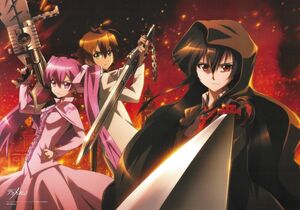 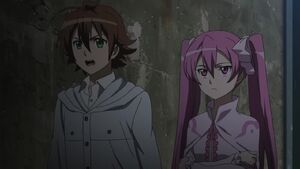 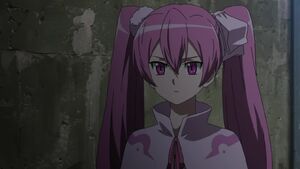 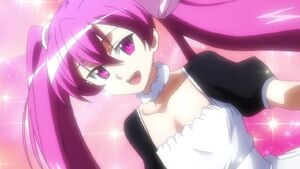 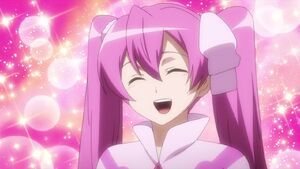 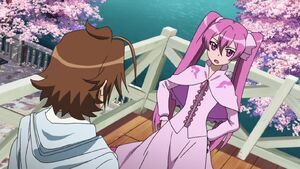 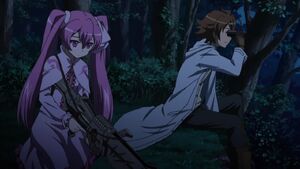 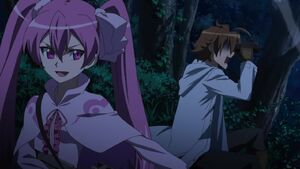 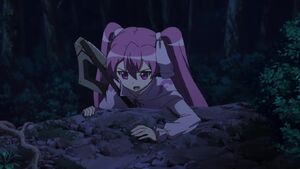 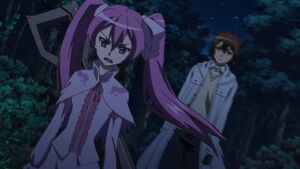 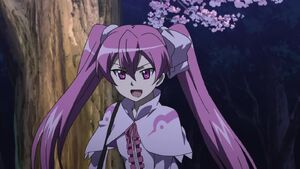 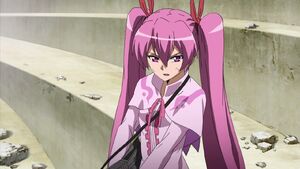 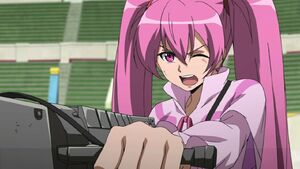