Minene Uryuu is an villainess turned heroine in the anime/manga series, Future Diary, and the secondary female protagonist of the series. She is a the Ninth Diary user and the owner of the Escape Diary. Initially introduced as a terrorist attempting to get rid of all religion (due to losing her parents to a fight over three takes on the same god), she eventually becomes and on and off ally to Yukiteru Amano and Yuno Gasai.

Minene is a young woman in her late teens-early twenties, who has dark purple hair with eyes to match. She later loses her left eye during the survival game and wears an eyepatch, although she has a glass eye beneath it.

Her standard outfit consists of a black, sleeveless jacket, military trousers or jeans, with a tank top under the jacket.

However, when she was first introduced, she was seen wearing a lavender-coloured gothic lolita-styled dress. However, it was hinted that her usual clothing was wet and cold, leaving her no other choice to change clothes. She found the dress in an abandoned clothes room.

Due to her parents' death when she was only 8 years old, Minene was forced to live a brutal life as a streetrat in a Middle Eastern country overrun with conflict caused by religious extremists.

As a result, Minene developed a hatred towards God and religion as a whole, eventually becoming a terrorist bomber as she grew older. Despising everything related to religion, Minene targeted religious structures, individuals and organizations to destroy them, her ultimate goal to wipe out the very idea of God from the world.

Minene considers herself a survivor first and foremost, and her Escape Diary reflects her belief. Before gaining her Future Diary, Minene still had an early version of the Escape Diary which she used as a regular journal, and had to navigate her own ways out of situations, writing down the possible escape routes in the diary. Because of her survival instincts, Minene believes she does not need anyone else in her life to help her, after spending her childhood and teenage years alone with no love or guidance. Minene is very tactical and intelligent, able to deduce and gather information easily.

Upon introduction, Minene is very intimidating, easily mentally unnerving Yukiteru Amano. She appears very psychotic and excitable when performing her acts of terrorism, more than willing to obliterate anyone who gets in her way. However, after her first appearance, she mellows out and is really a tough woman with a hidden touch of vulnerability to her. She does have a friendly side to her, having an attachment to small children and keeps a family of chipmunks with her for a time, eventually releasing them before her attack against John Balks.

Despite being clearly being a tomboy, Minene also has a feminine side to her, wearing several outfits during her time. Her standard outfit consists of black, sleeveless jacket, military trousers or jeans, with a tank top under the jacket. She also wears a gothic lolita dress in her first appearance, which she hangs on to despite not wearing it again. When she first wears the dress, Minene is temporarily reduced to a jibbering, embarrassed wreck when complimented as "cute" by Masumi Nishijima. Minene appears to be haunted by her eight-year old self, and the memory of crying over her dead parents, symbolising her desire to escape her own past and be saved. 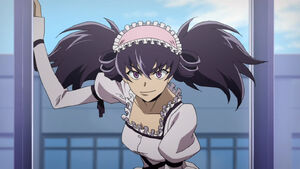 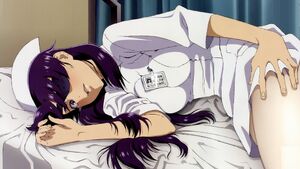 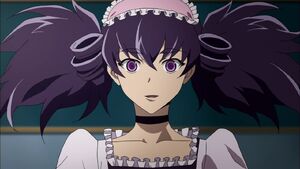 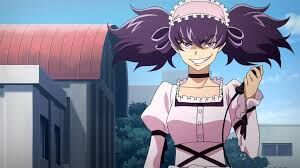 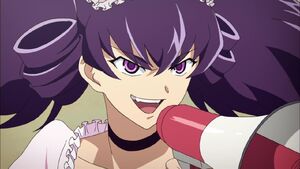 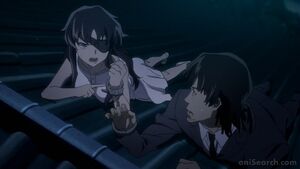 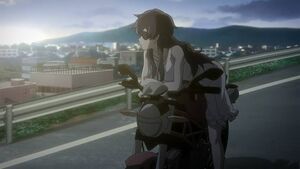 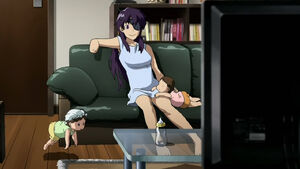 Minene with her sons, Takashi and Minato
Add a photo to this gallery

Retrieved from "https://hero.fandom.com/wiki/Minene_Uryuu?oldid=2193487"
Community content is available under CC-BY-SA unless otherwise noted.