Head of Gryffindor House at Hogwarts School of Witchcraft and Wizardry

Punishing her students, awarding points, but also subtracting them

Professor Minerva McGonagall was a Professor at Hogwarts. She was proud and loyal to Hogwarts, Dumbledore and Harry Potter. She was the head of the Gryffindor house. She was a stern, yet kind teacher for Transfiguration. Like pretty much everyone else, she hated Umbridge, and defended Hogwarts during the final battle against Voldemort.

She was portrayed by the English actress Dame Maggie Smith, who also portrayed the Reverend Mother in Sister Act and its sequel. A younger McGonagall appears in Fantastic Beasts: Crimes of Grindelwald, portrayed by Irish actress Fiona Glascott. 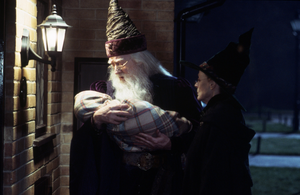