He is a small version of Mario. The only differences are that all his attire is metallic, his hands are like lego people's hands, and he has a wind-up key in his back that later in the series looks like Mini Donkey Kong's wind-up key.

When Donkey Kong is watching his television set, he sees a commercial for the toys, which persuades him to immediately buy some Mini-Marios. However, he soon learns that there are currently none in stock. Put to great chagrin, Donkey Kong invades the Mario Toy Company, kidnaps its Toad employees and steals the remaining toys for himself. Mario chases Donkey Kong around various levels, trying to get the toys back. In the end, he retrieves all the toys and scolds Donkey Kong for his actions. When Donkey Kong cries over the incident, however, Mario cheers him up by letting him have his own Mini-Mario that actually likes him.

Mario vs. Donkey Kong 2: March of the Minis

Once again Mini Mario is the main character in the game and defeats Donkey Kong.

Donkey Kong tries to get a Mini Pauline but he is too late. So he kidnaps Pauline again and the Minis have to help rescue her. They succeed twice, and Mario gives him a Mini Pauline to end the ongoing conflict once and for all.

Mario and Donkey Kong: Minis on the Move

Mini Mario is the main character in this spin-off game.

Donkey Kong kidnaps Pauline for no reason and the minis have to save her. But it turns out it was an act to get Mario for a party they set up for him.

In this second spin-off game, Mario has the ability to wall jump without using pads like in the second game of the series. 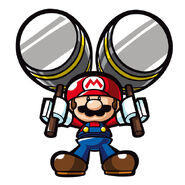 Fire Mini Mario
Add a photo to this gallery
Retrieved from "https://hero.fandom.com/wiki/Mini_Mario?oldid=1482684"
Community content is available under CC-BY-SA unless otherwise noted.