Studying with Shiroe, Writing in her notebook

Escape from Hamelin with her brother (succeeded), Become stronger so she can be of use to Shiroe

Minori is one of the main protagonists of the light novel and anime series Log Horizon. She is a teenage girl and a beginner player of Elder Tale. She is a Human Kannagi-Apprentice. She and her twin brother Touya knew Shiroe before the Apocalypse, who helped them out when they were starting the game. After the Apocalypse, they were tricked into joining Hamelin and held as hostages until Shiroe forced the guild's disbandment, After this, they were welcomed into the Crescent Moon Alliance but left shortly afterwards to join Log Horizon instead. Eventually, Minori develops feelings for Shiroe and becomes a love rival for Akatsuki.

Minori is a cute young girl with short brown hair which she pulls into a one-sided pony tail. She usually wears a red and white traditional Japanese Miko costume or a red kimono-like robe when sleeping.

Minori is the "elder" twin (having been born just shortly before her brother), and is the complete opposite of him in many ways. She is very kind, polite and well-mannered, and tends to look after her more impetuous brother. Both siblings are in their second year of middle school. Shiroe notes in the light novels that they are quite young compared to most players, since the recommended age for playing Elder Tales is 15. She and her brother look up to Shiroe as a mentor, due to the fact he tutored them on the game when they started playing, and so chose to join Log Horizon over staying with the Crescent Moon Alliance, as they wanted to train under him more.

Minori is also a capable leader; when she, Touya, Isuzu, Rundelhaus Code and Serara first started working together in a party, initially they didn't make much of a team. Later, Minori attempted to get to know more about the others' techniques and preferred abilities and tried to get them to cooperate. Their effectiveness increased dramatically after that.

Minori soon develops feelings for Shiroe but doesn't become aware of them until she sees Akatsuki act affectionately with him during the Libra Festival (according to Touya, everyone else was able to see her feelings long before she figured them out). Despite being aware that she is rivalling Akatsuki for Shiroe's affections, she realizes that being jealous towards Akatsuki would bring about nothing. As such, she views Akatsuki as a friend in spite of their rivalry.

While generally optimistic and rarely without a smile on her face, Minori is also quite insecure, considering herself to be a burden due to her age, inexperience, and meekness. When Shiroe was preparing to free her and Touya from Hamelin, she tried to dissuade him from it as it would be a heavy burden on him. In the novel, when she realizes that she's in love with Shiroe, she runs through a mental list of reasons as to why such a relationship can't work, and why she's an inadequate match for him. However, Touya encourages her to accept her feelings, because no matter how hard she tries, she can't deny them.

Despite her insecurities, Minori is determined to help Shiroe in any way she can, going so far as to change her sub-class to make herself more useful. Minori also displays numerous traits of a Yamato Nadeshiko (personification of an idealized Japanese woman) despite her young age. Not only is she a Shrine Maiden, but she is very loyal and subservient to Shiroe, but also has the will to stand up for herself when necessary. She also tries her hardest to improve Shiroe's (self-inflicted) poor reputation and make people see more of his good points rather than his "Villain behind Glasses" persona, as she doesn't like people seeing him as a bad person, something she eventually talks to him about. However, these attempts sometimes have the opposite effect, as hanging out with people like Minori and the young-looking Akatsuki causes many to believe Shiroe's a pedophile.

Minori's class is a Kannagi (or Shrine Maiden), one of the three healing classes. As such, she is not fit for fighting and specializes in healing and support magic. As a Kannagi, her healing style revolves around damage interception, creating barriers around a single ally or the party. Thus, rather than healing damage after its done, these techniques prevent damage from being taken in the first place. A barrier placed on a target can completely nullify a predetermined amount of damage.

At the time of the Apocalypse, Minori and Touya had only recently started the game, and so were only Lv. 6. While they were trapped in Hamelin, Touya was in the group of kids that was forced to hunt monsters for items that they then gave to the others to tailor while Minori was forced to stay in the guild hall. As a result, Touya pulled ahead of her. At the Summer Training Camp, Minori was Lv. 21 while her brother was Lv. 29. However, before this, she had been studying under Shiroe, who taught her various strategies and party formations. All in all, she is the most intelligent member of Log Horizon after Shiroe himself and soon proves herself to be a capable leader in her own right.

Minori and Touya with Hamelin 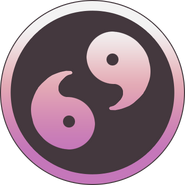 The symbol of the Kannagi, Minori's class 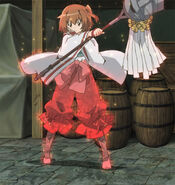 Add a photo to this gallery
Retrieved from "https://hero.fandom.com/wiki/Minori?oldid=1652970"
Community content is available under CC-BY-SA unless otherwise noted.