Mio is the bass player of the Light Music Club; even though she acts mature, calm, and collected most of the time, she freaks out from things she's afraid of, or are gross or pertain to gore. Because of her extreme shyness, she chose bass over the more conspicuous guitar. She is so delicate that merely imagining herself being the center of attention almost makes her faint, but still plays bass quite well. Although, she is not altogether uninterested in joining a band outside school, the time spent with the Light Music Club members is the time she enjoys the most, so she has completely devoted herself to the club. During the school festival performance in the fall of her first high school year she acted as lead vocalist instead of Yui, who had lost her voice. At the time it seemed like Mio might have overcome her stage fright, but after the performance ended, she tripped over a cord and fell, exposing her underwear, and was traumatized anew.

Mio stands at 5'3", being the tallest in the group and has straight, long, black hair and gray-blue eyes. As shown in episode 4 of season 1, she is also quite a bit more busty than the others (except Mugi), much to Yui and Ritsu's dismay, and later Azusa's as well.

Pants over skirts. In summertime, she likes to wear sleeveless clothes, such as tank tops.

Mio Don't Say Lazy attire Mio's Don't say "lazy" attire is a wide black dress with ruchings on the inside. She wears light blue tights and her right arm is covered with an arm glove in the same color and black stripes on it. She also wears a pair of black high heeled shoes, a tiny black hat with a red stripe and holds a short brown cane.

Mio Listen In Listen!! Mio wears a long violet shirt with a yellow and a red triangle and the writing "rhythm" on it. The shirt does not cover her left shoulder and is covered by a black belt over her hip. She wears a black shirt under her violet one. She also wears red tights and brown boots. Her left hand is covered with a black glove. She is wearing a red ribbon on the right side on her head.

NO, Thank You! Mio's attire is similar to any school uniform dress code, except that she is wearing a violet hoodie over it and a large red tie. Her attire is similar to the Sakuragaoka High, with the same white buttoned shirt (under the hoodie) and long black socks. The only difference is the plaid dark blue skirt and the brown shoes. The shoes are actually pink T.U.K.s.

Mio's second attire in NO, Thank You! She wears a plain white shirt that goes down over her hips and a violet hoodie over it. She also wears pink tights, rosy gloves and a dark grey belt. 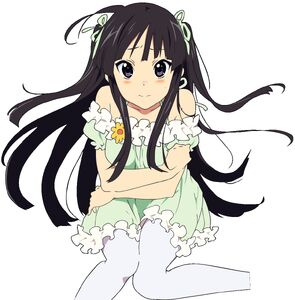 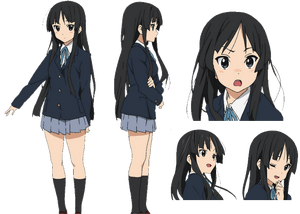 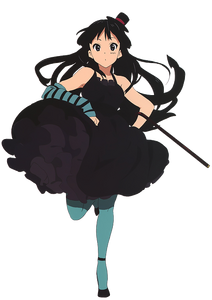 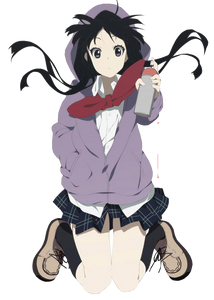