Leader of the Battle Brawlers Resistance

Hanging out with her friends and family

Free New Vestroia from slavery and Defeat King Zenoheld and the Vexos and put an end to their evil plans of conquering the universe. (succeeded)

Mira Fermin is the deuteragonist of Bakugan: New Vestroia and is the leader of the Bakugan Battle Brawlers Resistance. Mira's Guardian Bakugan is Magma Wilda. She is a 16 year old Vestal. Her father was Clay Fermin, a scientist until he perished in an explosion alongside Hydron and Zenoheld, and her brother is Spectra Phantom (also known as Keith Fermin). When she first played Bakugan, she thought of them as just unintelligent creatures. That was until she witnessed  Alpha Hydranoid, while being tortured, speak out in vengeance. It was then that she realized that Bakugan were alive, so she started the Resistance with Baron and Ace.

She was voiced by Risa Yukino in the Japanese version, and by Alyson Court in the English dubbed version.

Mira is a 16-year-old teenage girl who has short orange hair, wears a small silver jacket, white gloves, blue earrings, has sapphire blue eyes, and wears a rouge jumpsuit with uneven sized boots and leggings. She sometimes wears a yellow helmet with her matching motorcycle, and a locket with a picture of her brother inside.

In Bakugan: Mechtanium Surge, Mira wears a white track jacket with blue stripes over a blue dress, as well as a black collar. Her hair is in its original style.

Mira is described as a stubborn tomboy, much like Runo Misaki. Mira has shown that she could act girly, when she fooled some guards by acting like a crazed fan girl while she, Baron Leltoy, Dan Kuso, and Marucho were looking for the Dimension Controller in Alpha City. She could also be flirty when she wanted to be as shown the day she saw Alpha Hydranoid being tortured when she flirted with the guards at her father's lab.

She will do anything to get her brother back, even if it means going off on her own and getting in danger. It is because of her desire to find her brother that she gets into fights with Ace a lot, like Dan and Runo do. Mira is the one who gave Percival to Ace Grit, which is how Ace joined the Resistance.

Mira, being the only female leader, always tries to get the team moving. She's the one who pushes Baron to battle strong and also attempts to get things straightened out.

Mira, a 16-year-old Vestal girl, formed the Bakugan Brawler Resistance, after witnessing the tortured Alpha Hydranoid speak out in vengeance to the invaders, to free all the captured Bakugan from Prince Hydron and the Vexos. She also has a brother that she desperately wants to find after he disappeared during Hydranoid rebellion. Although she is the leader, she is not necessarily accepted by the others, as she has a small tendency to go off on her own. She prefers the Subterra attribute. Her main Bakugan is Subterra Magma Wilda and her Trap Bakugan is Baliton.

In the first episode, Lync Volan, and Volt Luster ambushed and challenged them to a brawl. At first she had the upper hand, until Volt immobilized Wilda. With the help of Dan and Drago, they won the brawl and Mira offered them to join the Resistance, which they accepted. She takes them back to their base to introduce them to Ace Grit and Baron Leltoy; while Baron was excited to meet the famous Battle Brawlers, Ace was less than pleased The two battled which ended in a tie. Later she helps Barron gain confidence in his match with Shadow. Baron wins and takes 3 of shodws Bakugan. When Marucho Marukura goes missing she goes and searches for him and when a masked person defeated Mylene (revealed to be Shun) she thought that he was her brother. On the way to and Alpha city they met Shun Kazami after he helped Dan defeat Spectra Phantom and Gus Grav and agreed to join in hopes of finding Skyress. Later in Alpha city she meets her Dad Aka professer Clay and battles Lync and his new Bakugan Altair made by her dad. However she wins when Altar wont work.

While Ace and Shun were brawling in the Tornment she distracts the Alpha city guards by acting like a Vexos fan girl which lets the rest of the Restance move on. She later tackled the guards to let Dan move on to distroy. the demention controller which he does.

While on the way to Beta city Dan compaires Mira to Runo Misaki and gets to know about the former Haos brawler making her fell jealous. later that night everyone is beginning to hear the conversation between Runo and Julie because of the weakening wall between the two worlds. Runo does make it to New Vestroia, but finds that she is only half way there, being unable to touch anything, but still able to see and speak with Dan. The restance then takes her to the portal while Marucho battles Shadow. While that happens Gus Lync and Spectra enter the portal so Mira follows them along with Dan and Barron.

When they arrive on earth Dan introduces Mira and Barron to Juile Runo and Alice Gehabich.Unfortachly the 3 Vexos from before enter and Spectra kidnaped Runo, causing the Brawler's to look for her. Baron and Mira intervene on Gus and Lync causing Gus to run away with Mira in pursuit. while on her chase she sees Spectra with Runo with Spectra freeing her and reveling that he is actually against Prince Hydron's rule and wants to team up with Dan to take him down. Mira's suspicion of Spectra being her brother Keith only rose because of this action, as she believed that he infiltrated the Vexos to free the Bakugan. Spectra and Gus are later sent to New Vestroya and the demotion transporter needs to be rebuilt as a result of it. This left Lync, Mira, and Baron trapped on Earth.

The next day Dan Runo and Juile decide to show Mira and Baron an amusment park. However Baron Dan and Runo get seprated from Mira and Juile. However Gus and Spectra return by tracking Dans gaunlit to his location. Once Mira catches up with them she proposes a battle Spectra and if she's victorious, Spectra will be unmasked. If she loses, however, she has to join the Vexos, and even battle her own friends. Gus however twists the deal so that he would brawl in Spectra's stead. Gus had the advantage until Julie Makimoto, the "original" Subterra master, gave Mira tips on how to win causing Wilda to beat Vulcin. Although Gus urges Spectra not to reveal himself, Spectra ignores his pleads and does so anyways. Spectra left Mira in shock about the fact that her worst enemy was really her brother, Keith Fermin.

Later she is seen wondering why Kieth joined the Vexos anyway, and meeting Dans parents showing her his house. When Drago gets taken by Spectra Mira shows concern for Dan and wonders why her own brother would do such a horriable thing. After having a conversation with Spectra she decides she needs to be with him. Before the Restance is ready to head back to New vestroya, She betrays the Resistance as she says that she wants to stay with Keith once telling the others on Earth, Spectra is her brother. She returns to New Vestroia through the portal Apollonir opened with Spectra, Gus and Lync after revealing her betrayal. Although she joined the Vexos, she is really wondering what Spectra is up to. She feels confused when Spectra frees Ace Shun and Marucho saying he did that because he owes her a debt angering Myline. The next day she has dinner with Keith where he tells her his master plan to rule NV with her by his side schoking her. Unsure of what to do next she challenges her brother to a battle and if she wins, she goes back to being with her real brother and not Spectra; however, if she loses, she will have no choice but to serve Spectra. Due to Cyborg Helois power she lost the brawl, showing regret as she says, "I'm sorry my friends," at the end of the episode, and is also seen crying as she has no choice but to be an enemy to the Resistance. The Next day Spectra takes her to see Prince Hydron where the Prince order her to capture Drago. Once the meeting is over Spectra and Gus take her and Lync to a underground room in Gamma city. Once the brawlers get to Gamma City, Dan, and Ace face off against Gus and Mira. Spectra before hand had Gus and Mira take the Bakugan that were being developed for Prince Hydron to test for himself shocking Ace and Dan that shes a Vexos now However, due to Mira purposely throwing the match, Gus and Mira lose, all six of the Bakugan are captured, and the last Dimension Controller is destroyed Mira also Joins the Restance again. 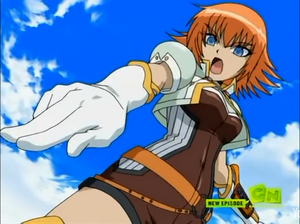 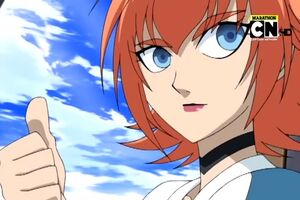