Intangibility (Her ghosting ability to walk through solid objects)

Prove her worth by becoming a space ranger and beat Emperor Zurg (all succeeded).

Mira Nova is the deuteragonist of Buzz Lightyear of Star Command. She is the tomboyishly beautiful Princess of the planet Tangea and also a Space Ranger.

She is voiced by Nicole Sullivan, who also voiced Shego on Kim Possible, Marlene the Otter from The Penguins of Madagascar, Drew Saturday from The Secret Saturdays, Franny Robinson from Meet the Robinsons, and Supergirl from DC Superhero girls (2019). In the Japanese dub from the series, she was voiced by Takako Honda.

Being a princess, Mira is heir to throne of Tangea. She became a space ranger against her father's wishes, because she was inspired by how Star Command saved her planet.

Her race is very aristocratic, something she dislikes. Tangea is home to two classes of people, Grounders, who live on the surface, and Mira's race who lives in the sky and looks down upon the Grounders both literally and figuratively.

Mira Nova went against the royal family by dating a Grounder one year before she enlisted in Star Command, and also makes it clear that as a future leader of Tangea she wishes to stop the treatment of Grounders as outsiders.

Unlike many females in the series, Mira Nova is one of the few women not dazzled by the bravado of Buzz Lightyear and can work with him as an equal partner.

Mira has shoulder-length red hair with blue eyes and blue skin. She wears a green and white space suit and she also wears a green spacecap when she wears her space helmet.

In Buzz Lightyear of Star Command: The Adventure Begins, a direct-to-video film that serves as a pilot to the series, Mira is introduced as a rookie space ranger.

Buzz is called by Commander Nebula to observe her doing very well in a training session at Star Command, showing herself to be highly skilled, and so she is assigned to Buzz Lightyear as his new partner.

However, she is rebuffed by Buzz, who lost his previous partner, Warp Darkmatter during an investigation into 3 missing LGMs.

When Nebula is planning a full-scale assault on Planet Z, home to Emperor Zurg, Mira proposes an alternate plan.

The plan called for a single ranger to slip past Zurg's defenses in the Alpha One, a small prototypical spacecraft. Though Buzz agrees, the plan is laughed off by Nebula, who accuses the two of being show-offs.

Later on, Buzz and Mira both attempt to steal the ship, but Mira is successful, due to usage of her mental powers. She flies off, pursued by Buzz in his spacecraft.

Because they leave, they avoid being victims of Zurgs plan: to use the Uni-Mind, a sphere that controls the LGMs telepathic bond, to control everyone in Star Command.

Mira and Buzz, along with XR and Booster who had stowed away in Buzz's ship, discover the plan and narrowly avoid being destroyed.

Buzz insists on facing Zurg alone, but Mira and the others turned back after hearing Buzz admit in his "Misson Log" that he was wrong to try to work alone and are able to rescue Buzz from becoming Zurg's accomplice.

Though Zurg escapes and Buzz's ex-partner is arrested, Mira is able to repair the uni-mind so that the mind-controlled rangers are freed. Afterwards, she joins Buzz, XR, and Booster in forming "Team Lightyear".

The TV series follows the adventures of Team Lightyear, which includes Mira, in their battle against Emperor Zurg.

Mira is shown to act as a co-pilot and second-in-command to Buzz. She is also shown to possess the most common sense of anyone on the team. Mira is shown to have issues with her father, who wants her to quit being a space ranger.

He often insults Mira's teammates, and comments on Mira's lack of practice with her mental powers. It is revealed in the Buzz Lightyear of Star Command series, that her race evolved from squishy blue blobs.

As a Tangean, Mira naturally possesses certain mental abilities. She can pass though solid objects, an ability called "ghosting", although there are some enemies of Tangea who realize this and can build impenetrable "ghost-proof" walls to imprison her.

She can also read minds, and can render people unconscious in a technique called the Tangean brain squeeze.

At one point, she was able to sense the location of her planet, which had mysteriously disappeared. However, it is implied by her father that her powers are far below what they should be due to lack of practice.

As a space ranger, she is skilled in hand to hand combat, and she can also make use of her suits abilities, such as its wrist laser. 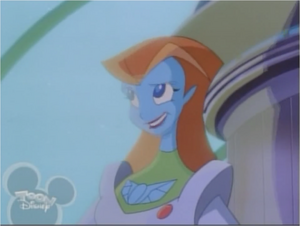 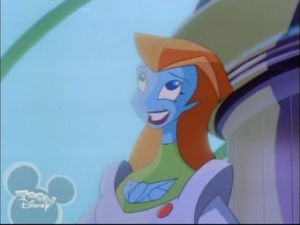 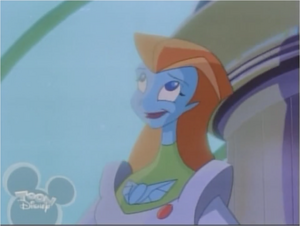 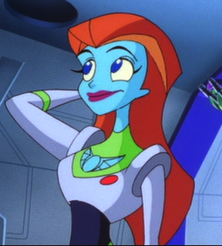