Mirage (aka Dino) is an Autobot spy and a major protagonist in the film Transformers: Dark of the Moon (2011). He transforms into a Ferrari 458 Italia and speaks with Italian accent. His weapon is two wrist blades that can be detached into a length of a cable.

When Sam Witwicky and Bumblebee were being menaced by Decepticons trying to recapture Brains, Mirage and Wheeljack arrived. Mirage taunted and injured Sonar while cloaked, and demanded the remaining Decepticons bring it on as he revealed himself. Using his invisibility to his advantage, he fought the Decepticons together with Bumblebee and Wheeljack until Optimus Prime arrived with reinforcements from NEST.

However, when Shockwave arrived on the scene, Mirage and Wheeljack were blasted by him, leaving them critically injured. Ratchet could save their lives, but was unsure if they'd end up looking the same after his repairs.

Mirage first appears alongside Bumblebee, Sideswipe and Que/Wheeljack (disguised as the Iranian Defense Minister's limosine), infiltrating an illegal nuclear weapon site in Iran. After Que passes by, Mirage transforms and intimidates the guards with his blades, allowing Bumblebee to destroy the illegal nuclear weapon site. After the mission, Mirage returned to the N.E.S.T. headquarters. He informed Charlotte Mearing that Optimus Prime is in a bad mood about the discovery of the Ark's fuel cell in Chernobyl. Later, after the retrieval and revival of Sentinel Prime, Mirage is among the few Autobots who witness his revival and his explanation of the Space Bridge pillars, a teleport device that are crucial to the Autobot cause.

Mirage and Sideswipe joined Bumblebee, Sam Witwicky, Seymour Simmons and Dutch in following up an explanation why people are being killed by the Decepticons. He, alongside Sideswipe witnesses Sam's arguement with his new girlfriend Carly who left by riding her Mercedes-Benz SLS-AMG, completely unaware it was Soundwave in disguise. After the humans have determined the Decepticons are planning to use Sentinel Prime's ability to use the Space Bridge, Mirage, Bumblebee and Sideswipe formed a convoy to escort Sentinel back to the base. Then, they are confronted by the Dreads, a sub-team of Decepticon assassins disguised as N.E.S.T.'s Chevrolet Suburban emergency vehicles. After Hatchet tries to race his way through, Dino transforms and throws his blades at the latter and steered him into the firing line of the Autobots before hurling him into the oncoming traffic, fininshing him off. Mirage and Bumblebee immediately arrived at the base, leaving Sideswipe and Ironhide to finish off the remaining Dreads, Crankcase and Crowbar.

N.E.S.T. and the Autobots pursued Sentinel Prime to Washington D.C. After Optimus fails to stop his former predecessor and mentor, who brought an entire army of Decepticons into the capital city, Mirage, Bumblebee, Sideswipe and N.E.S.T. tries to stop the entire Decepticon army, but were forced to retreat due to being outnumbered.

Mirage was among the few Autobots who were forced into exile aboard the Xantium when Sentinel Prime forced the human government to do so. As the Xantium was about to left Earth, Starscream destroyed the ship and Mirage was thought to be among those who were killed. However, after knowing Sentinel and the Decepticons won't honor their promise to leave Earth alone, the Autobots secretly hid themselves into the rocket booster of the ship and it safely splashes into the ocean before the ship got destroyed. Mirage, alongside the Autobots, rejoined their human allies on the outskirts of Chicago, the Decepticon stronghold being used by Megatron and Sentinel Prime to bring Cybertron to Earth.

Mirage and the rest of the Autobots drove their way into the streets heading to the pillars, only to be attacked by Shockwave's pet Driller. They manage to take shelter in a nearby building while preparing to attack. After N.E.S.T. was equipped with Wheeljack's weapons, the Wreckers then provided a distraction to the Driller, allowing the Autobots a change to get away.

However, Mirage, alongside Bumblebee, Sideswipe, Rachet and Wheeljack were caught by Soundwave, Barricade, Shockwave and a small group of Decepticons. After Dylan Gould convinced Soundwave to kill the Autobots as a sign of respect, Soundwave then proceeded on the human traitor's orders by sadistically killing Wheeljack first, leaving Mirage's life at stake. He was saved when a Decepticon ship hijacked by Wheelie and Brains, crashed into a nearby river and caused a distraction.

Mirage, the remaining Autobots joined N.E.S.T. and the US military in an assault on the building that had the pillars. He was among the few who fought the remaining Decepticon armada, before having his arm injured. After the control pillar was destroyed by Bumblebee and Rachet along with the deaths of Megatron and Sentinel Prime at Optimus' hands, Mirage approached his battle-worn comrades and began to accept Earth as their new home.

After the battle for Chicago, Harold Attinger's CIA taskforce "Cemetery Wind" was tasked with hunting down the surviving Decepticons on Earth, but also hunted down the Autobots as well. Mirage received a message from Optimus Prime, instructing all Autobots to flee for their lives.

Five years after the Battle of Chicago, Mirage was not listed as "deceased" by Cemetery Wind, indicating that he survived the organization's Autobot hunt and is currently in hiding.[1] 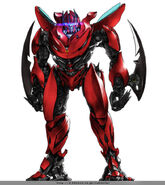 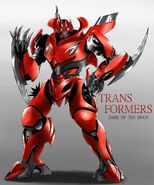 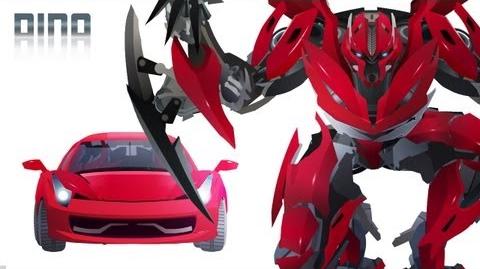