The She-Devil
Take-Over Siblings (with Elfmann and Lisanna)

Mirajane Strauss is a supporting protagonist in the anime/manga series Fairy Tail. She is an S-Class Mage of the Fairy Tail guild, as well as its "drawing card", and is often a model for the Sorcerer Magazine. She is the eldest of the Take-Over Siblings and the older sister of Elfman Strauss and Lisanna Strauss.

In her childhood, Mirajane's parents died so she joined Fairy Tail along with her younger brother and younger sister, Elfman Strauss and Lisanna Strauss. She was around 11 years old at that time. When she was a little girl, she was always in brawls with her rival of the time, Erza Scarlet. She even intimidated many of the older members, due to her punkish attitude and bullying tendencies. Despite teasing Natsu Dragneel endlessly, she always had a soft spot for him, finding him to be cute when he cries. As she grew older, her abilities increased tremendously, and in the year X781, at the age of 16 years old, she became an S-Class Mage, being the second youngest Mage in Fairy Tail to do so; only Erza was a teenager when she achieved the same honour. One year after the promotion, during a mission with her brother and sister, Elfman and Lisanna, Lisanna was supposedly killed by Elfman, due to him losing control when he tried to take over "The Beast". The shock of Lisanna's loss caused Mirajane's personality to shift dramatically; she abandoned her bullying tendencies and became the sweet and motherly figure beloved by the guild today. She also lost her will to fight and the vast majority of her Magic Power, though she got it back later.

In her childhood, Mirajane was known as "The Demon" (Majin), and before Lisanna's pseudo-death, she used to be a very feared girl, infamous amongst guilds and criminals alike. She dressed in a punk-gothic style, and was rather temperamental and bad-mouthed everyone, especially Erza, whom she had quite a rivalry with from when they were kids. However, due to a past incident involving the apparent death of her younger sister, Lisanna, Mirajane somehow lost much of her Magical ability and her will to fight (both of which have since returned), and her personality changed drastically.

Now, Mirajane is a loving and caring girl who treats her friends, and even strangers, with kindness. Mirajane plays a motherly role within the guild, and is often seen running the bar at the guild hall. She has rarely been shown to be in a bad mood, and can tolerate all of the guild's eccentricities. However, there have been a couple events that have disturbed Mirajane, including her discovery of the theft of an S-Class job by Natsu Dragneel, Happy and Lucy Heartfilia, and her later conflict with Laxus Dreyar following the destruction of the guild building.

In keeping with her motherly role, Mirajane is very determined to protect her comrades. She has gone so far as to change her appearance, in order to fool the Phantom Lord Guild into thinking she was Lucy, whom they were trying to capture. Along with running a bar, Mirajane shows great talent not only in modeling, but has other talents such as playing the guitar and singing as well. She is very popular, not only among the Fairy Tail members, but also with many people outside of the guild. She likes cooking and has since her younger, tomboyish years. Mirajane was described by Lisanna as being a good cook, preparing food alongside Elfman for the three Take Over Siblings. She dislikes cockroaches. She is sensitive to being called stupid as shown when she cried twice when Gray (accidentally) referred to her as an idiot. 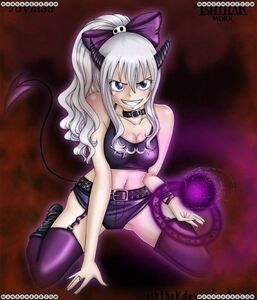 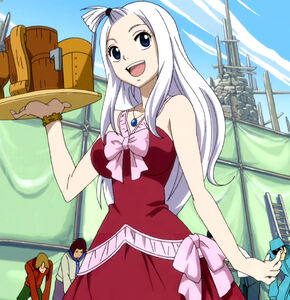 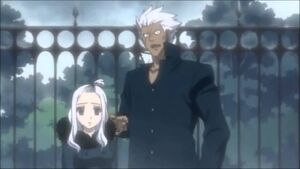 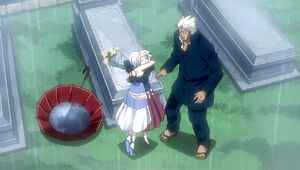 Mirajane and Elfman are reunite the real Lisanna. 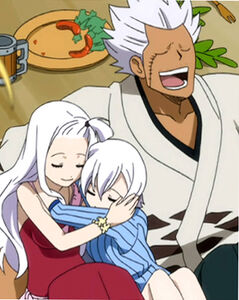 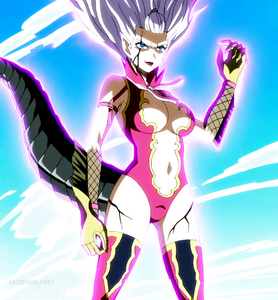 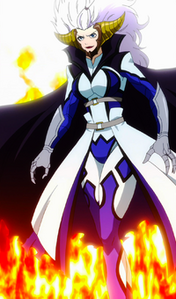 ...and now revenge
Add a photo to this gallery

Retrieved from "https://hero.fandom.com/wiki/Mirajane_Strauss?oldid=1967852"
Community content is available under CC-BY-SA unless otherwise noted.