Prove her worth as an Exorcist

Chronokinetic Exorcist, Scapegoat, Pessimist
Miranda Lotto is a supporting protagonist in the manga/anime series D.Gray-man. She is an Exorcist for the Black Order whose Innocence has the ability to alter time. She is a very tragic figure who suffered a great deal from childhood; after being fired from a hundredth job, she accidentally traps her town in an eternal time loop by wishing that tomorrow would never come, which her grandfather clock fulfils due to containing her Innocence at the time. With the help of Allen Walker and Lenalee Lee, she is able to change the town back to normal and becomes an Exorcist, being delighted that she finally has a place where she belongs.

Miranda has pale skin and dark circles around her eyes. Initially, she kept her hair up in a bun constantly and wore a dress which made her look much older than she actually was. Since meeting with Allen Walker and Lenalee Lee and beginning her quest to become an Exorcist though, she wears her hair down but, she now wears her hair in a high pony tail after the return back to the European branch. She has now elected to wear slightly less conservative attire. Miranda has also been seen wearing gloves to cover the puncture scars on her hands, and is rarely, if ever, seen without a pair.

Miranda is the only Exorcist that controls a non-offensive anti-Akuma weapon, and often keeps it invoked even after reaching her physical limit. When it was pointed out that in order to keep her Innocence activated for the duration of the journey to Japan she would have to stay awake, she answered that she could stay awake for days on end. She attributes this to her deep depression over losing so many jobs keeping her awake in the past.

She often feels inferior and useless, partially because she was fired from all one hundred jobs she previously tried to work. While she can be reclusive and detached from the rest of the world, she is a kind and friendly person who genuinely wants to do her best and help others. Her klutzy and at times erratic nature is often the subject of comic relief within the series. She tends to constantly apologize for everything she does, even if the act is helpful. Her helpless attitude seems to get on the nerves of fellow exorcist, Yū Kanda. In her hometown, she was often mocked and ridiculed in a song by the town's children who looked upon her presence as a sort of jinx. 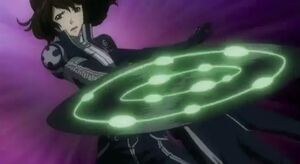 Add a photo to this gallery
Retrieved from "https://hero.fandom.com/wiki/Miranda_Lotto?oldid=1632003"
Community content is available under CC-BY-SA unless otherwise noted.