To become a Pro Hero (ongoing).
To save at least one million people in peril (ongoing).
Regain his powers (succeded)

Mirio Togata, also known by his hero name, Lemillion, is a major supporting character in My Hero Academia. He serves as the deuteragonist of the Shie Hassaikai story arc.

He is a student at the prestigious U.A. High School training to become a Pro Hero. He is a part of Class 3-B of the Heroes Studies course. Mirio is also the leader of the Big Three, the trio of students (Mirio, Nejire, Tamaki) who stand at the top in the school, making him the most formidable student in the entire school.

Due to his strength of character, Mirio was originally the top candidate to inherit One For All before Izuku Midoriya was chosen. Togata's quirk was Permeation, which allowed him to become intangible. However he lost his quirk at the hands of Shin Nemoto, who shot him with a Quirk-Destroying Drug.

Mirio normally comes across as an extremely goofy and very energetic individual with some peculiar habits. Going solely based on his personality, many tend to question how Mirio is one of U.A.'s top students. Mirio has a very optimistic attitude and can almost always be found smiling. His personality is what led Sir Nighteye to believe that he could be the one to replace All Might as the symbol of peace.

Mirio does not allow his laid back nature to cloud his judgment or impede his dreams of becoming a hero. He has proven to be an extremely hard worker, turning a near-unmasterable ability into one of the world's most powerful Quirks. Mirio is constantly looking for ways to improve his skills and tries to work toward his goals by accumulating different experiences to learn from them.

When he was a small child, Mirio accidentally fell into a river but was saved by a Pro Hero. This event marked his decision to also become a hero to save others. Knowing he can't rescue everyone, Mirio chose the hero name "Lemillion" because he aspires to save at least one million people. Despite Mirio's uplifting personality, he can suffer from failure just like everyone else. He has an excellent understanding of hero protocols and can control his emotions proficiently in order to see the bigger picture.

Mirio is also extremely brave and, in contrast to his laid back nature, he is experienced in dealing with dangerous people and is not scared easily. He was able to talk to Overhaul in his normal, cheerful manner despite knowing about his background as a dangerous Yakuza criminal. He also went ahead of the entire combined hero force during the Shie Hassaikai Raid and combated Overhaul, Chronostasis, Deidoro Sakaki, and Shin Nemoto all by himself.

Despite losing his Quirk and his mentor following the raid, Mirio remains steadfast in his hopes to become a hero. His cheerful personality has not faded and he is empowered by Sir Nighteye's final words to him. He even refused Izuku's offer to receive One For All and told Tamaki Amajiki he was in no rush to get his powers back, meaning that he is okay being Quirkless.

Ever since Eri was rescued and adopted by U.A., Mirio has formed a deep bond with her and acted like a father figure. He was very glad when Eri managed to smile for the first time and helped her train her Quirk, Rewind. When Eri was able to use her Quirk with success by training with bugs and lizards, Mirio wanted to help his fellow heroes so he asked her if she could restore his Quirk back. He was initially guilty for taking advantage of Eri like her captors did, but due to the kindness he showed her, Eri claimed that she'd been training in order to help him.

Since then, Mirio has been grateful to Eri for letting him become a hero again.

Mirio is a tall young man with a very muscular build who possesses a number of noticeable scars around his lower arms. Mirio's design is very unique due to his blue oval-shaped eyes, drawn in a simplistic style with no visible sclera, and nose which is prominently rounder than most others. He has blond hair, the top part of which is arranged in a cowlick, while the bottom section is worn swept backward.

In his school uniform, Mirio dresses like most of the male students, minus the blazer. He wears a belt with a large, rectangular golden buckle in the shape of a carnivorous mouth.

Before becoming a member of the Big 3, Mirio had long hair that he wore tied into a ponytail. It is assumed that he cut it so the support department could use it to manufacture him a hero costume that would work alongside his Quirk.

In his hero costume, Mirio wears a white skin-tight top with the number "[[1]]" (one million) stamped across his chest in a bold, yellow font. The trimming on the top and shoulder pads are made in a matching fashion. On his waist, two green lines act as a belt, along with some lines of similar appearance on his shoulders, which dip in places to form two V’s. Mirio also wears baggy dark blue pants and white knee-high boots. He wears a red cape as well as thick gloves of matching color. Mirio’s costume is then topped off with a white visor with yellow lenses.

Mirio is considered one of U.A. High School's most powerful students alongside Tamaki Amajiki and Nejire Hado, who are all collectively known as The Big 3. Mirio, in particular, has earned enormous acclaim due to a combination of extraordinary technique, great fighting ability and a charismatic personality, to the point of being considered a contender for the No. 1 spot among Pro Heroes and, at one point, a potential successor for All Might as a wielder of One For All. His abilities garnered the attention of the former sidekick of All Might, Sir Nighteye, who personally trained Mirio to the elite status the young hero now possesses.

During the Shie Hassaikai Raid, Mirio proved his strength on the battlefield against the likes of Overhaul and his followers. Mirio endured the guerrilla warfare of Shin Nemoto, as well as the balance inhibition of Deidoro Sakaki, and was able to take them by surprise and defeat the duo with great speed. While recovering from the balance hindering effects of Deidoro's Quirk, Mirio proceeded to overpower Hari Kurono and Overhaul in a two-on-one fight, all while protecting Eri. Overhaul found himself outmatched to the point where he was forced to have one of the few valuable Quirk-Destroying Bullets used on Mirio, in an effort to level the playing field. Even then, Mirio was able to use the power of prediction and incredible brute strength to hold his own against the villain for 5 uninterrupted minutes while still protecting Eri.

Mirio lost his Quirk after being struck with a Quirk-destroying bullet, though he believed that he could regain it when Eri masters her power. Eventually, Eri was able to master Rewind and successfully restored Permeation, allowing him to help his fellow heroes in the Paranormal Liberation War.

According to Mirio's father, Permeation could potentially lead to fatal results to the user if handled incorrectly. The Quirk is noted to be very hard to control.

Mirio's senses are negated when using this Quirk, as the necessary elements for them to work (light, oxygen, sound, etc.) will also pass through him.

Mirio's Permeation does not extend to other people, meaning he has to be extra careful while handling those he needs to rescue. If someone becomes susceptible to an imminent danger, like projectiles or other hazards, Mirio becomes unable to block them unless he deactivates his Quirk.

Lemilliosuit: Mirio's Quirk normally forces him to phase out of his clothes, leaving him nude. His Hero Costume is lined with special fibers produced from his hairs. This allows Mirio's costume to phase with him whenever he activates his Quirk. Its design is based on a hero who saved and inspired Mirio when he was young. 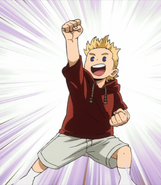 Mirio as a child. 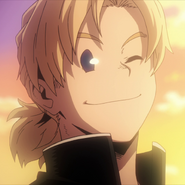 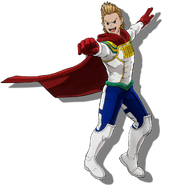