The Misfit of Demon King Academy

Student at the Demon King Academy.

Fuse with her source so both her and her sister could live (succeeded).

Magical Creation
Misha Necron (in Japanese: ミーシャ・ネクロン, Mīsha Nekuron) is the deuteragonist/main heroine of the 2018 Japanese fantasy light novel series The Misfit of Demon King Academy, as well as its manga & anime television series adaptations of the same name.

Sasha Necron was born fifteen years prior to the events of the story to members of the powerful Necron family. Upon her birth, her ancestor Ivis Necron split her body and soul into two parts. This second Sasha, known as Misha Necron, was intended to serve as a vessel for the Demon King of Tyranny to possess when the girl reached fifteen years of age, and as such would disappear on her fifteenth birthday.

Because Misha was destined to only live for fifteen years, most people (including Sasha) avoided getting close to her. Days before her fifteenth birthday, Misha enrolled at the Demon King Academy with her sister where she met Anos Voldigoad. Voldigoad was the first person to treat Misha with kindness and friendliness despite her ultimate fate. With the help of Anos, Misha and Sasha were able to reconcile and fuse with their own sources, saving Misha from disappearing.

She is voiced by Tomori Kusunoki in the Japanese version who also voiced Setsuna Yuki in Love Live! Nijigasaki High School Idol Club. and by Brianna Knickerbocker in the English version. Kusunoki who also voiced Karen Kohiruimaki in Sword Art Online Alternative Gun Gale Online. Knickerbocker's other heroic roles include Rem in Re:Zero - Starting Life in Another World, Kanao Tsuyuri in Demon Slayer: Kimetsu no Yaiba, Filo in The Rising of the Shield Hero, and Wiz in KonoSuba: God's Blessing on this Wonderful World!.

Because of her origin as a source clone, Misha was ostracised and ignored her entire life. As a result of the neglect she faced, Misha was quiet and reserved, usually keeping her thoughts to herself and choosing not to socialize. She was also very obedient, preferring to meekly do as she was told. When she became friends with Anos Voldigoad, Misha felt blissfulness, as she had never met anyone who hadn't treated her differently because of her origin.

Misha Necron was born into the Necron family, a lineage of powerful mages. During her induction at the Demon King Academy, Misha was revealed to have tremendous amounts of magical power. in the Magical Power Assessment Test, Misha's magical power was measured and deemed to be one-thousand times greater than the average student's. After gaining a complete source thanks to the efforts of Anos Voldigoad, Misha's already considerable power increased exponentially. Voldigoad was the under the impression that Misha and her sister were more powerful than any modern demon. Through the use of magical spells, Misha was capable of supernaturally manipulating reality in certain ways to aid herself and hinder her opponents. 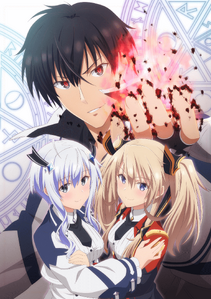 Misha (bottom left) on the first key visual for the anime adaptation. 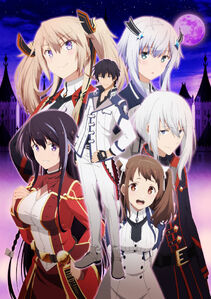 Misha (top right) on the second key visual for the anime adaptation. 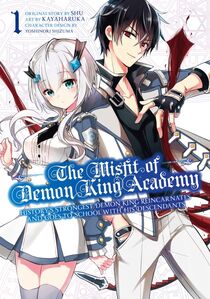 Misha with Anos on the cover of the first volume of the manga adaptation.
Add a photo to this gallery

Retrieved from "https://hero.fandom.com/wiki/Misha_Necron?oldid=2041775"
Community content is available under CC-BY-SA unless otherwise noted.