Rita L. Desjardin best known as Miss Desjardin, is a major character in Stephen King's Carrie. She is the young, attractive and lively P.E. teacher at Ewen High School in the town of Chamberlain, Maine.

In the novel, Miss Desjardin is in her first year as a gym teacher and therefore receives a little guidance from the assistant principal, Mr. Morton. As the story begins, Miss Desjardin at first feels the same disgust that everyone feels for Carrie White.

But when she witnesses Carrie being humiliated and harassed by the other girls in the locker room for her hysterical reaction to her first period and realizes that Carrie didn't even know what a period was, she takes her side and wants to punish the girls, that bullied her by having them suspended for 3 days and banned from the Senior Prom, but the principal, Mr. Grayle settles on a lesser punishment: a week of boot-camp style detention in the gym, refusing to attend it will result in 3 days suspension from school and banishment from the Prom.

In Miss Desjardin's view, the only reason why the administrators didn't go along with her proposed punishment was because they are all ruled by men and thus didn't really understand just how nasty the girl's behavior had been.

The lead bully, Chris Hargensen skips the detention and thus is banned from the Prom. Mr. Grayle reprimands Miss Desjardin for cursing at Christine, but stands by her, when Christine's lawyer, who is also her father, threatens to sue the school, unless Christine is allowed to attend the prom and Miss Desjardin fired from her job.

At the prom, she talks to Carrie about her own prom night and how she was several inches taller than her date and felt awkward, but she still remembered it as a beautiful event and later congratulates her for winning Prom Queen.

Christine rigs a cord connected to 2 buckets above Carrie and Tommy Ross and pulls it, when they are on the stage, drenching them in pig’s blood.

Everyone laughs and Miss Desjardin gets influenced by the laughter that she tries to hide it from Carrie, but to no avail as Carrie uses her telepathic powers to read her true thoughts.

Miss Desjardin later ceases to laugh and goes over to Carrie who pushes her aside with her incredibly strong telekinetic power, because Carrie knew that deep down inside she was also laughing at her by telepathically reading her mind.

Once outside, Carrie uses her telekinetic powers to wreak the school, then leaves for home, destroying everything she passes. Miss Desjardin is one of the few survivors of the "The Black Prom”, who managed to escape in the nick of time.

2 weeks after the catastrophe, Miss Desjardin retires from teaching, saying that she is secretly consumed with guilt over Carrie because of the behavior she showed at The Black Prom and to which that it contributed to Carrie's murderous rampage and also states, that she would rather kill herself than to teach again.

It is also implied she constantly has nightmares since then because of what happened.

Miss Desjardin is renamed as Miss Collins in the 1976 film and she is portrayed by Betty Buckley.

Miss Collins is one of the first characters to show kindness towards Carrie White by prompting the other girls to pass the ball to her. During the shower scene where Carrie was mistreated, the light bulb bursts, while she tended her.

Later, she goes with Carrie to the principal and explains what happened. The principal gives the girls a week's detention at her convenience or refusal of their prom tickets and 3 days suspension.

Then, Miss Collins tells the girls how upset, furious, mad and angry she is with them. Then, she makes them all do a merciless, week-long, boot camp-style detention to serve as a punishment.

When Christine Hargensen refuses, Miss Collins slaps, argues, fights with her and kicks her out of prom. Later on, Miss Collins sees an upset Carrie and asks her what's wrong and tells her how pretty she is and raises her hopes of finding someone.

She finds Sue Snell distrustful about wanting Carrie at prom and tells her and her boyfriend Tommy Ross off, warning them not to hurt her. At prom, Miss Collins shares her prom story with Carrie and the two of them hug.

She is later seen at the coronation of the Prom King and Queen. When Miss Collins spots Sue, who tries to warn her about the bucket and kicks her out of the gym. When the blood is poured onto her, however, she starts to cry.

When Carrie sees everybody laughing at her, she sees Miss Collins laughing and saying, "Trust me Carrie, you can trust me". As the massacre starts, Miss Collins can be seen trying to revive Tommy Ross with Cora Wilson and a few others.

She can also be seen grabbing Cora's ears trying to see if she had anything to do with the cruel prank Christine pulled.

Miss Collins and others try to carry Tommy and find help, but Carrie's telekinesis intercepts the crowd and pins Miss Collins to the side as Carrie kills her by crushing her with a falling basketball goal post like a helpless female poodle.

Notes: This is only film adaption where she dies.

In the 2002 version , Rita is portrayed by Rena Sofer and her name is spelled "Desjarden".

Miss Desjarden is a bit rougher than Miss Collins in the original. She witnesses how Morton's desk moved five inches after the shower incident, when Carrie was in the room.

After finding out that Christine and her top right-hand woman, Tina Blake, compounded Carrie's locker-room humiliation by vandalizing her locker and filling it with tampons, an angry Desjarden hurls a bag full of tampons at them the next day.

Then, she announces that they've been sentenced to a week of detention, telling that skipping the punishment would result in three days' suspension and banishment from the prom. Chris, refusing to take her punishment, storms out.

The Principal reprimands Desjarden for this, but stands by her when Christine's father threatens to sue unless Desjarden is fired from her job.

At the prom, she talks to Carrie about her own prom date; in this version, she says her date carried a fake gun to imitate James Bond but he ended up arrested.

As a result, she was by herself at the prom until her father came and took her home. She also tells Carrie that things change and not always for the best: the pretty, popular girls will be fat, cute boys will be bald and the miserable ones might have a happy life.

When Carrie begins destroying the gym telekinetically in revenge for being drenched in pigs' blood, for Tommy's death and for the following laughter, Miss Desjarden sends two students to carry Tommy's body and leads an escape through a vent (instead of the fire doors, as in the book).

She saves ten students and is the last one to leave and has to see, how objects are moving in an unexplained way through the air and the gym. She is nearly electrocuted to death, but manages to survive.

She reports the events to Detective John Mulchaey (David Keith) when she was interrogated about it, that Carrie had telekinetic powers based on what she once saw on Morton’s office and what she had to see during the Black Prom.

She states that the disaster was caused by Carrie using her telekinetic ability in vengeance for what happened.

It was implied she would be a part in the TV series which never materialized because of the low ratings of the TV-movie.

Miss Desjardin was portrayed by Judy Greer in the movie. Her lines were similar to Betty Buckley's lines in the original. Miss Desjardin is first seen telling the ladies to get their caps on and get in the water to play pool volleyball.

She is then seen trying to calm down Carrie and slaps her to get sense back into her. She then brings Carrie to the office. Later on, she punishes Christine and the rest of the girls via detention and kicks Christine out of the prom and suspends her, when she doesn't want to submit to the detention.

When she finds out about the Sue's and Tommy's intentions about Carrie, she warns them not to play a joke on Carrie, similar to the original version. She later tells Carrie, how beautiful she is and tells her, what she can wear at the prom.

Miss Desjardin is at the prom dancing and talks to Carrie. Later, after Carrie is humiliated, Miss Desjardin tries to reach out to Carrie, but Carrie pushes her to the floor.

Miss Desjardin is seen watching in shock, when she witnesses Tommy's death and then in horror as Tina literally burns to death like a grilled giant gourami.

Before Carrie electrocutes the people in the gym like a catfish, she grabs Miss Desjardin by the throat in a choke-hold and throws her to the stage, away from the wet gym floor, thus saving her from death and her wrath.

She later looks in disbelief, scared, shock and surprise when she sees Carrie flying towards the exit after that.

She is last seen outside the gym with other survivors near her, wearing a cast on her arm and looking severely traumatized, scared, and guilt-ridden while she silently tells Sue, who goes to her, that Tommy is dead. She then watches Sue go away in direction of Carrie. 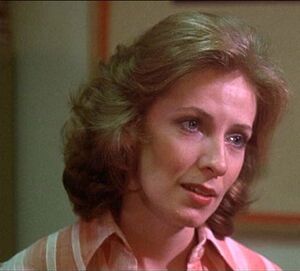 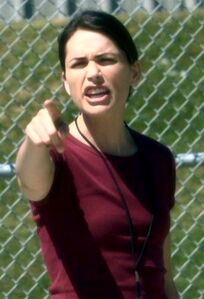 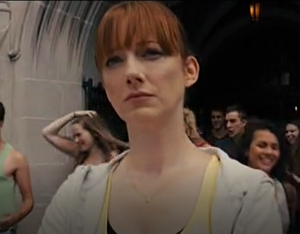