Miss Pauling
Pauling (by herself)

Miss F. Pauling is a loyal assistant to the Administrator. She performs a number of duties including reporting unusual background checks, ordering and delivery of goods, opening communication channels and murders.

Like her colleagues, Miss Pauling has been shown to be cold towards the enemy team.

She is voiced by Ashly Burch in the Expiration Date short, Gun Mettle update, and Tough Break update.

The Administrator considers inter-company friendships a profound breach of trust, forbidden by contract. It was during a routine background check that Miss Pauling discovered the RED Demoman and BLU Soldier's friendship, which she then brought to the Administrator's attention. Under strict orders, Miss Pauling personally delivered a number of highly volatile custom-order Mann Co. weapons to Demoman in exchange for agreeing to kill his friend Soldier. She then proceeded to do the same for the Soldier. Just as intended, this quickly destroyed their blossoming friendship and thus beginning the seven day war.

The Administrator hired a Director to record background information about what the RED team members might say if asked questions about their jobs. Miss Pauling felt the surveillance was unnecessary due to the low IQs of the mercenaries, but nevertheless oversaw the interviews. She assured the team that the purpose of the interviews was merely a PR stunt to help improve the reputations of the mercenaries to the citizens of Badlands. After the interviews were finished, the Administrator gives the order to Miss Pauling to give the director an "interview" of his own. This involved luring him to an abandoned mine shaft, where Miss Pauling followed him in with a loaded Big Kill, a Shovel, and a bag of corpse-grade quicklime. The Director has been missing ever since.

After the BLU Scout, Soldier, and Spy are sentenced to community service at a local mall, Miss Pauling is shown on the phone with the Spy who is asking for help being released. Miss Pauling wants to hear how the Soldier became a public defender, and the Spy dismisses it with a reminder that a magician is the Soldier's roommate. She asks the Spy to ensure their problems do not escalate, the Spy assures her as he watches the Soldier punching an angry father. After the sudden arrival of Old Nick, Miss Pauling orders the Spy to quickly eliminate him, but is horrified to find the Spy's plan involves the help of a young boy instead of simply getting him to safety.

Death of Poopy Joe and Loss of Australium

Miss Pauling, along with Helen and Saxton Hale, were all questioned by several senators about the death of Poopy Joe (whom they launched into space for one dollar), and the disappearance of all the Australium in the world. The Administrator gave them the undisclosed info, which included talk of her stockpiling Australium for years, and eighteen idiots to help her with it. The senators all were shocked by the story, and decided to end their questioning quickly afterwards. The document that contained the information had the word 'INCINERATE' stamped on it.

While Saxton Hale is busy fighting a yeti, Mann Co. comes under attack by Gray Mann's legion of robots. Miss Pauling shows a prerecorded tape of Hale to the mercenaries that informs them that, with the death of the Mann brothers, they are now unemployed. However, with attack of the robots on Mann Co.'s headquarters, they have been re-hired to fight them. Although they are not being paid for their work, to their dismay, Pauling reveals that the robots somehow run on piles of money, and that any money left after destroying them belongs to the mercenaries. Miss Pauling emphasizes to them that it is not just a fight for Mann Co. or Saxton Hale, but a fight for their jobs.

Along with the RED team, Miss Pauling discusses the latest defense job against the robots in a dark room in Coal Town. She tries to figure out which of the many Mann Co. buildings the robots will invade next. When the Soldier claims that he knows the exact time and location, since he supposedly infiltrated Gray Mann's robot base the day before, no one believes him. After some shenanigans which involve keeping the Soldier thinking that all of his teammates are American, he mentions the eagles that raised Gray Mann, something that only Miss Pauling and the Administrator should know, thus cluing to Miss Pauling that he may be telling the truth. The Soldier reveals that he used his cardboard robot costume to sneak into Gray's facility and eavesdrop on their plans. Miss Pauling asks him to make a disguise for the Heavy and herself so that they can infiltrate Gray's facility once more.

In Gray Mann's facility, the three discover that he is frustrated at his robots' stupidity, as well as how they have a problem with security leaks due to a "tactical mastermind" in their base. Gray states the he has found a solution to the problem and unveils his newly-built Mecha-Engineer. The new robot activates and quickly identifies the trespassers.

Upon Gray Mann's acquisition of Mann Co., Miss Pauling ran to warn the Administrator only to find a note telling her to hide. Six months later, she received orders from the Administrator to assemble the mercenaries back together. Miss Pauling first finds Soldier in the middle of giving celebrity house tours and murdering Tom Jones. By impersonating a police officer, Pauling is able to keep Soldier out of legal trouble while simultaneously recruiting him. She next lures Pyro from his job as CEO of Frontier Engineering by setting a large fire to a nearby building. Demoman, having become overweight and even more of a slovenly alcoholic, readily joins her crew for a chance at his old job. While preparing to fly to Siberia to pick up Heavy, she finds out that Scout and Spy have both been arrested and are set to be hanged for their crimes of vandalism against Teufort.

Putting the flight to Siberia on hold, Miss Pauling drives the team to Teufort to rescue Scout and Spy. While Demoman and Soldier are assigned to delay the trial and Execution, Miss Pauling visits the library to destroy the Administrator's birth records with Pyro's assistance. She stops the Execution of the Scout, Spy, Demoman and Soldier, citing that the mercenaries could not have been responsible for the various zoning errors in Teufort, for which they are being executed. Fooling the mayor with a pamphlet, she directs him to the library, followed by all the townspeople, effectively calling off the Execution and angry mob. Privately, she admits that the entire population of Teufort suffers from madness induced by lead poisoning, and so the mercenaries were not charged with the murder and property damage they actually caused.

It is later revealed that Miss Pauling also met with a heavily concealed Administrator, who gave her new orders to obtain the last cache of Australium.

Having assigned the mercenaries to various duties, Miss Pauling searches for Sniper's home in Australia along with Demoman, finding it apparently abandoned. They are quickly ambushed by Sniper, who had discovered that Mr. and Mrs. Mundy were not his birth parents, and threatens Miss Pauling for information on his actual parentage. Miss Pauling placates Sniper, telling him they are headed to meet his true parents, convincing him to join. Piloting a submarine obtained by Spy and Soldier, Miss Pauling leads the team (sans Scout and Heavy) to the sunken city of New Zealand, where the last cache of Australium lies. However, Miss Pauling discovers that the cache was depleted by Sniper's real father, Bill-Bel; unaware of the metal's potential, he exhausted the supply painting his prototype rockets which have long since exploded. Sniper's mother steals away with the only functioning rocket, prompting Miss Pauling to despair that she has failed in her mission.

Along with the other mercenaries who were with her, Miss Pauling is captured by the TFC mercenaries who begin torturing them for information. Despairing that she has failed her mission and her team, Miss Pauling accepts Spy's offer to commit suicide with their dignity intact, but is interrupted by Heavy attempting a rescue. The Heavy is revealed to be the TFC Spy, to whom Miss Pauling inadvertently reveals the coordinates where she was meant to meet the Administrator. Before the TFC Spy and Demoman can kill them, Soldier and his girlfriend, Zhanna, show up and kill the TFC mercs, having also brought a dying Gray Mann to Pauling by his request. Angered by their mutual dislike and Gray's request to stop the Administrator, Miss Pauling goes into an emotive speech defending her allegiance to the Administrator, mentioning how she's willingly lied and killed under the Administrator's command. Midway, though, Spy stops her as Gray has died before hearing most of her speech. Spy is none too amused at the implication that Miss Pauling has been lying to the team.

Miss Pauling played a large role in Expiration Date, the Source Filmmaker short that came along with the Love & War Update. Having been tricked by the Scout in an attempt to meet Miss Pauling to ask her out on a date, she had arrived to the RED base to help defend the Intelligence. On arrival, she was initially concerned about the presence of the briefcase but became furious after finding out that the Scout had pushed the briefcase alarm. In her frustration, she turns, notices the decor and asks if they are having a prom. She then yells at the Scout for wasting her “one day off a year” and attempts to leave. The Scout attempts to reason with her, stating they should discuss it over dinner, opening a door to reveal a giant bread monster. The other mercenaries arrive to help while Miss Pauling yells at the Scout for pressing the alarm, then notices his death watch and uses it as a timer. She uses the Payload cart as a bomb, but she and the Scout end up on the wrong side of the blast doors. Without a word, both the Scout and Miss Pauling dive into the bread monster as the Payload explodes. They survive, and the Scout asks Miss Pauling on a date. She does not outright disagree, but begins to describe the tasks on her work schedule, one of which is to kill the person who pressed the briefcase alarm, and then remarks that the Scout would already be there, implying that she is going to kill the Scout.

Pauling generally complies with her employer's views for fear of incurring her wrath, even if she does not necessarily agree with them. Despite her boss' stern demeanor, she insists the Administrator is "not so bad when you get to know her". It has been shown that Scout has taken a romantic interest in her, which she tries to completely ignore. 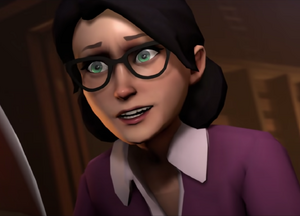 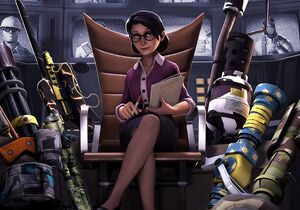 This article contains content derived from the "Pauling" article on the Team Fortress Wiki, licensed under CC-BY-SA.