Miss Red is the heroine of Tom and Jerry Meet Sherlock Holmes.

Miss Red is a Victorian-era singer whose charm and beautiful voice attract the crowds and not just our heroes, Sherlock Holmes, and Dr. Watson. She is unjustly accused of a heinous crime and kidnapped by Professor Moriarty. Tom, Jerry, Tuffy and the detectives rescue her and she helps save the day.

Miss Red is an attractive woman with a slim build. She has orange hair and blue eyes. Miss Red wears a predominantly red dress with a pink skirt. Additionally, she wears a pink necklace with a small ruby on it.

Miss Red is an kind-hearted individual who cares deeply for Tom and Jerry. She felt concern when Tom is injured in any way, such as getting a pitchfork stuck to his backside. 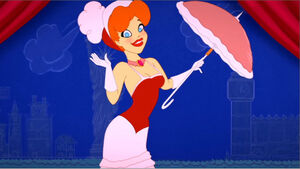 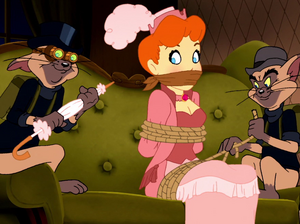 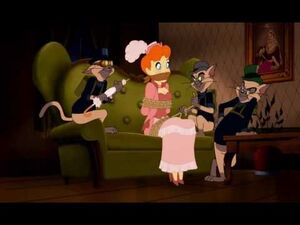 Retrieved from "https://hero.fandom.com/wiki/Miss_Red?oldid=2246459"
Community content is available under CC-BY-SA unless otherwise noted.