Miss Victory was secretly stenographer Joan Wayne, whose work in a Government department, coupled with her desire to help the war effort, led her to don the patriotic guise of Miss Victory: a tight-fitting, red-white-and-blue costume with a plunging neckline and a V emblem across her chest.

The 1984-revival version also possesses superhuman strength, as well as the ability to fly over short distances. Her true identity is Dr. Joan Wayne, a research scientist in the United States Department of Defence, who in the 1940s developed the "V-47 formula" to increase the strength/stamina of allied troops. The formula, however, only worked on Joan herself, and she became a superheroine. The formula also prevented her from aging, so that the Ms. Victory of today is still a young, attractive woman.

Ms. Victory received an overdose of the related but faulty V-45 formula from the Black Commando, which affected her personality, transforming her into the villainous Rad. Eventually, the V-45 formula was removed from her system and she returned to Femforce. In the mid 1990s, Wayne temporarily resigned her leadership of Femforce, and was replaced by her grown daughter Jennifer, the only other person on whom the V-47 formula would work. Jennifer was referred to as the second Ms. Victory. After Joan returned to the Ms. Victory role, Jennifer eventually took V-45 and became the second Rad. Jennifer (as Rad) is not really a villain, but more of an anti-hero. In addition to her daughter, Ms. Victory's family consists of boyfriend, fellow hero Captain Paragon and a cloned son of the couple created by an enemy.

Ms. Victory appears as an extremely beautiful young woman with an athletic and muscular build. She has long blonde flowing hair and baby blue eyes.

Ms Victory is an all American girl, patriotic and reserved. She's an experienced operative and is (usually) reasonable and professional. She's a fair and intelligent leader. 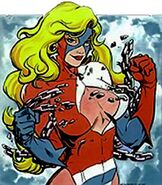 Add a photo to this gallery
Retrieved from "https://hero.fandom.com/wiki/Miss_Victory?oldid=2050663"
Community content is available under CC-BY-SA unless otherwise noted.