Spending time with his wife

Tragic Superhero
Mister Miracle a.k.a. Scott Free is a New God and occasional member of the Justice League.

Scott Free was originally the unnamed son of the Highfather of New Genesis. In order to form a truce between New Genesis and Apokolips, Scott was given to Darkseid in exchange for his son Orion. Scott Free was given his name by Granny Goodness as a form of cruel irony. He was raised to be a mindless soldier, but was secretly being encouraged by Metron, the New God of Time, to break free. While growing up, Scott developed a close friendship and later romance with Big Barda, one of Darkseid's elite warriors.

Scott later escaped Apokolips and headed to Earth. Little did he know that Darkseid had planned his escape to be as easy as possible so that he could end his truce with New Genesis, effectively starting the New God's war on Earth.

Scott Free was travelling across America when he came upon a veteran escape artist known as Mister Miracle and his assistant Oberon. Scott made became a part of their group after defending them from some gangsters. He showcased his own escaping ability to them later on, revealing his use of gadgets to break free. After the original Mister Miracle was assasinated, Scott took on his mantle and avenged his death. Now he and Oberon have rebooted the Mister Miracle name with a slew of new death-traps that only a New God can escape.

Mister Miracle would constantly be ambushed by Granny Goodness and her troops. Every time he would be put in a death-trap and every time he managed to get out in one piece. He was soon joined by Big Barda, whom he would later marry. Both became members of the Justice League.

Death of the New Gods

After Big Barda was murdered, Mister Miracle's normally good-natured personality was replaced by a much darker side as he faced the temptation to invoke the Anti-Life Equation and avenge her death. Superman and Orion tried to bring him back to his senses, but he eventually gave in to his inner demons and tried to kill the one responsible: Infinity Man, Brother of Darkseid. After coming into contact with The Source, the origin of the New God's power and the driving force behind his wife's death, he was disillusioned at how amoral it truly was and allowed it to consume him.

Scott Free was succeeded by his human apprentice Shilo Norman, who would go on to recruit a team of Japanese superheroes to help him combat Darkseid and the Anti-Life Equation. Afterwards, Scott reincarnated on a parallel Earth with the rest of the fallen New Gods.

Mr. Miracle has superhuman strength, agility, reflexes, endurance and his long life-span. He is extraordinarily smart, able to come up with elaborate escape plans and having extensive technological knowledge. Scott is an master fighter trained as a soldier from Apokolips and one of several owners of a Mother-Box, a device that grants him various powers such as teleportation, danger sense, gravity manipulation,  telepathy, emotion control, healing and other unknown abilities.

Mr. Miracle is heir to the alpha effect, these powers are almost limitless. For a time, Scott used his God-like powers to save his wife and battle the Apokolips forces.

Mr. Miracle also knows the Anti-Life Equation, the mind-controlling force that Darkseid has been trying to uncover. As the embodiment of freedom, however, Scott refuses to use it. 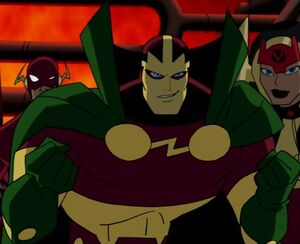 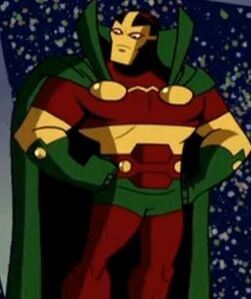 Mister Miracle in Batman: The Brave and the Bold 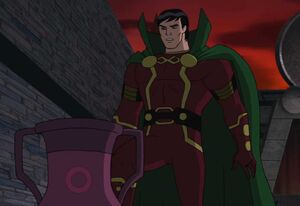 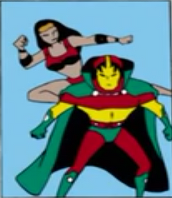 Mister Miracle's picture on a screen in Batman Beyond 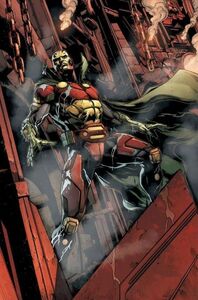