Mercedes Knight, also known as Misty Knight, is a fictional character and superheroine from Marvel comics and its universe, appearing as a major characters in numerous comics, such as Luke Cage, Iron Fist, and The Defenders comics.

She was originally a NYPD lieutenant who lost her arm on duty, but was given a bionic arm by Tony Stark and decided to leave the department after she was given a desk job. Becoming a private investigator, Misty worked with her close Colleen Wing stopping threats in New York, and helping superheroes. She is the partner of Luke Cage and Iron Fist, and a member of the Daughters of the Draogn, Heroes for Hire, Aberrant Crimes Division, Valkyrior's Defenders, and Daughters of Liberty.

She was created by Arvell Jones, Tony Isabella, Roy Thomas and Ross Andru, and first appeared in Marvel Premiere #21 in March of 1975.

Mercedes "Misty" Knight was born to unnamed parents in New York City, and later attended Metro College and the Police Academy in her youth. She graduated from the academy and joined the New York Police Department, and was partnered with lieutenant Rafael "Rafe" Scarfe. While serving the police department, Misty befriended the private investigator and vigilante Colleen Wing, whom became one of her closest friends.

One day while visiting a bank, Misty found a bomb there and attempted to get rid of it, but it exploded and took her right arm. Though Misty survived the incident, she was given a desk job due to not being able to go on duty due to losing her arm. When the businessman Tony Stark learned of the incident, he was inspired by her heroism and gave her a steel bionic arm created by Stark Industries. Misty continued her career, and was saved by Spider-Man and the Human Torch from criminals who attempted to rob her during Christmas. Though she recognized the superheroes, she wouldn't tell them this until years later.

Misty rejected her desk job and left the police department, and decided to become a private investigator alongside Colleen. The two created Knightwing Restorations, Ltd, a private investigation business that would help civilians in New York. When Colleen was attacked by the Cult of Kali, Misty attempted to protect her friend, and attacked Iron Fist because she thought he was one of the cultists. The two worked together to rescue Colleen from the Ravager and the Steel Serpent, and later helped Danny regain his company back and defeat the Golden Tigers. When Blake Tower wanted Misty to infiltrate Bushmaster's organization, she took on the name "Maya Corday" despite Rafe being against it. She later worked with Colleen, Iron Fist, and Spider-Man deal with the Steel Serpent once again, who gave Knight and Wing the nickname the "Daughters of the Dragon".

Misty would meet Luke Cage when he was tasked to capture her by Bushmaster, who threatened to kill his friends Claire Temple and Noah Burstein. The two worked together with Iron Fist after he explained everything, and managed to take down Bushmaster and save Temple and Burstein. Once Cage and Iron Fist formed the Heroes for Hire, Misty and Colleen would work with them on numerous occasions. Misty would become a paralegal for Nelson and Murdock when private work started to become dry, and helped Daredevil fight the villains Insomnia and Mr. Hyde. During her tenure in private investigating, Misty lived with the mutant Jean Grey, and later teamed up with the X-Men to fight Moses Magnum. After Iron Fist's apparent death, Misty began a relationship with Tyrone King, and later learned that Danny was alive, and managed to rescue him.

During the Civil War, Misty was asked by Iron Man, Mr. Fantastic, and Spider-Man to reform to track down superheroes who refused to comply with the Superhuman Registration Act by reforming the Heroes for Hire. Misty reluctantly agreed and worked with Colleen, and was part of the Initiative of registered heroes. Her relationship with Danny became strained, as he was a member of the New Avengers under Captain America, opposing the registration act. When the Hulk attacked New York after his exile, Misty's team were tasked with stopping his forces. The mass destruction and loss put strain on the team, causing members to leave and the group to later disband. She would later be kidnapped by the Puppet Master, forcing her to act as a the liaison for the Heroes for Hire, but was rescued by Iron Fist, and later formed a new team.

After the new Heroes for Hire was disbanded, Misty decided to create her own crew that was filled with criminals, and battled against the Villains for Hire. Misty then started to work undercover agent in Bagalia, and helped an injured Sam Wilson who was the current Captain America. She informed Wilson that Hydra had double agents within groups, such as the Avengers and S.H.I.I.E.L.D., and told Sam to trust no one. 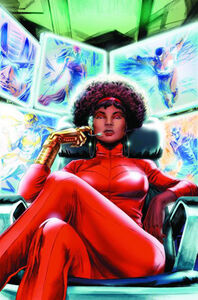 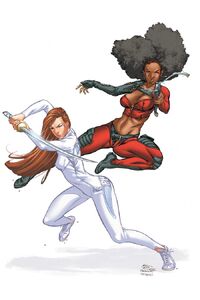 Misty and Colleen - Daughters of the Dragon. 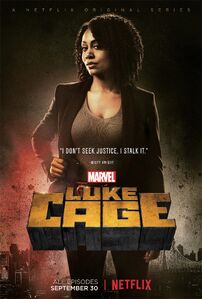 Simone Missick as Misty Knight in the Marvel Cinematic Universe.
Add a photo to this gallery

Retrieved from "https://hero.fandom.com/wiki/Misty_Knight?oldid=2301517"
Community content is available under CC-BY-SA unless otherwise noted.