Heroes Wiki
Register
Don't have an account?
Sign In
Advertisement
in: Articles under construction, Male, Live Action Heroes,
and 9 more 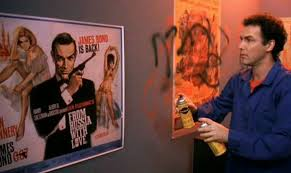 Mitch Weaver is the main protagonist of the 1998 cult classic comedy film Dirty Work. He is a guy who starts a revenge for hire business to pay for a heart transplant with his best friend's father who unbeknownst to him is his father as well.

He is portrayed by the late comedian Norm Macdonald.

Mitch grow up with his mother, who did not tell him who his father is, so his best friend Sam McKenna's father, Pops, a hard-nosed ex-boxer, stepped in to a father figure to him, but he didn't like Pops. At school he was bullied by a boy named Derek, who would take his lunch money. Although he didn't like Pops, one day when Pops to told Mitch and Sam to never let themselves be pushed around by anyone, which Mitch agreed with and was inspired to get revenge on Derek by planting Pops' guns in his desk, which gets Derek arrested for gun possession. After getting revenge on Derek, he and Sam continued to get revenge on people who wronged them when they next get back at a child-fondling crossing guard, by getting him caught in the act by using Krazy Glue applied to the bottom of Mitch's pants and a babysitter he and Sam didn't like by taking a picture of her on the toilet, which Mitch still holds to as an adult.

As a teenager, Mitch's mother died and he begin taking "notes to self" and moved in with Sam and Pops. He and Sam continued to get revenge on people who wronged them, such as getting back at a spiteful maid by planting popcorn kernels in the radiator of her car and a Doberman who harasses them by using his cousin's gay German Shepherd, who rapes the Doberman

However, in Mitch's adult life, he has had a string of bad luck. In 3 months he lost 14 jobs, his most recent at Aldo's Pizza after he was 30 minutes late to deliver a pizza, due Aldo still going by the policy, and tries to suggest to Aldo not go by it anymore, which gets him fired. Then when he tries to return home, Mitch finds that his girlfriend, Toni-Ann, who is Aldo's niece, has throw out all his stuff from their apartment and she breaks up with him after Aldo called her. Mitch then moved back in with Sam and Pops.