Heroes Wiki
Register
Don't have an account?
Sign In
Advertisement
in: Cartoon Heroes, In Love, Wealthy,
and 16 more

Mitsuki is one of the main protagonists in the Kappa Mikey cartoon.

Mitsuki was voiced by Carrie Keranen.

Five years prior to the series it's revealed that Mitsuki was a spy that worked for a top secret organization and considered the best they ever had before she decided she just wanted to live a normal life with friends and quits the agency. Not long after quitting the agency Mitsuki was able to become a famous celebrity in Tokyo by gaining a role on the famous show LilyMu. Over the years the show was losing some of it's popularity until Mikey Simon won a contest to be it's newest star. Upon his arrival to Japan Mitsuki grew a crush on him immediately and with the others showed him around. Becoming quick friends Mitsuki often defends Mikey when he makes a mistake or gets into trouble though even she finds it hard to defend him at times.

In LilyMu Mitsuki plays a tough bad girl while in reality she is the exact opposite. In reality Mitsuki is a shy, kind and patient young woman who merely wants her friends to be happy and safe. While she is arguably the most moral and forgiving of the main cast even she has her limits and has shown to get angry when her friends take advantage of her for their own selfish desires or lie to her about things she holds dear. Mitsuki is shown to be in love with Mikey but has a hard time outright expressing it to him.

Mitsuki is an attractive young lady who when not on set tends to wear a red long sleeved shirt with a yellow v-neck and white under shirt, blue pants and red shoes. She has long blue hair and green eyes. While as Agent M she wore a red wig and a typical black spy suit.

Mitsuki has said due to her training as a spy she has learned how to destroy all ten major organs in roughly fifteen seconds and has shown to be a very capable fighter when needed though now she mostly uses the skills to merely perform stunts since she avoids violence whenever possible. Along with being a capable fighter Mitsuki is also a skilled actor who is shown to be popular among the fans. 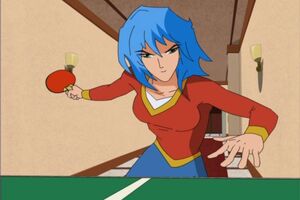 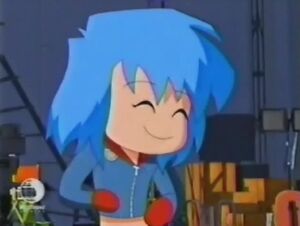 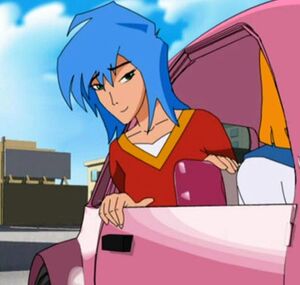