Mitsukuni "Honey" Haninozuka is one of the main characters of the anime and manga, Ouran High School Host Club.

He is voiced by Ayaka Saitō in the Japanese version of the anime, and by Luci Christian in the English version.

Honey possesses a babyish face and is extremely short in height; his actual height being 148 cm (4'10") but growing to be 180 cm (5'11") in a 2011 omake in a dream of Haruhi's. His hair is short and honey-blond in color (as opposed to Tamaki, whose hair is pale blond) and his eyes are brown. When not in Ouran's school uniform, he tends to dress simply in the anime but outrageously in the manga. He is typically seen with his cousin Mori or his stuffed bunny Usa-Chan (a.k.a. Bun-Bun) by his side, and whenever he speaks, flowers float around his head; the only exceptions being when he is angry, upset or confused. Honey's rose color in the Host Club is pink. In Japanese culture, this signifies joy and trustworthiness; Honey possesses both of these traits. In Western culture, the pink rose is a symbol of nurturing and affection; also traits which Honey demonstrates throughout the series

He is depicted as a childish and desserts-loving boy who is much older than his elementary school appearance indicates. He is also an expert martial artist from a famous martial arts family. When Haruhi is warned about his legendary skills, the point is illustrated in the anime by a mushroom cloud erupting where a city once stood. In the anime, there is a scene which shows Honey's true strength and it is said that Japan's Defense Minister has requested he never reveal his full potential, for fear that other nations might suspect that Japan holds a weapon of mass destruction, causing them to fire missiles upon that nation. Honey is often seen around his cousin Mori, with whom he is very close.

Honey is very fond of sweets and stuffed animals. He always carries around his favorite plush bunny named Usa-chan, an abbreviation of usagi, which means rabbit (also called Bun-Bun in the manga). He once tried to hide his true nature by acting like a "real man," but after Tamaki convinced him that true courage meant being exactly who you are, he stopped pretending. Together with Mori, he joined the Host Club, attracting customers with his shotacon cuteness.

Despite generally being very cheerful, upbeat and nice, Honey is also known to get into a really bad mood if he's woken up while napping, to the point that he terrifies his fellow Host Club member, namely Tamaki and the Hitachiin twins. Additionally, despite generally acting very childish, Honey has also shown that, in a similar vein to Tamaki, he's both actually intelligent and insightful towards other people and their feelings.

He lives with his father, the owner of a famous dojo; and his little brother Yasuchika, with whom he is often at odds.

In Chapter 72 of the manga, he graduates from Ouran, but says he will return to the Host Club every so often, as does Mori. They often return for visits and for a picnic planned by Haruhi. Mori and he also fetch Tamaki for the reunion plan with his mother. In Volume 18 of the manga, he is seen dating and marrying Reiko Kanazuki, and is the first of the Host Club members to marry. Their marriage is confirmed in the August 2011 omake, set two years after Chapter 83. In the July 2011 omake, it is confirmed that he is a third-year engineering student at Ouran University. 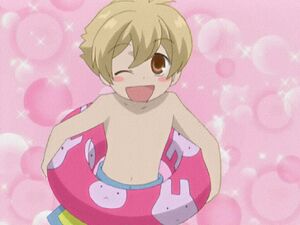 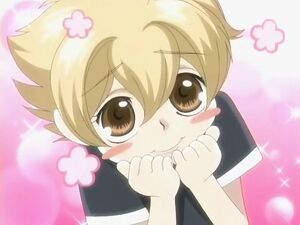 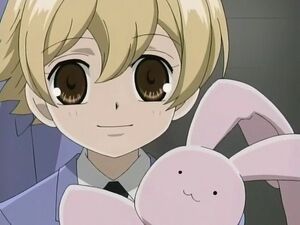