Member of the Six Heroes

Mentor of Ragna the Bloodedge and Platinum the Trinity

Mentor
Mitsuyoshi, also known as One-Eyed Twin Lotus and more famously as Jūbei, is a hero and a supporting character in BlazBlue. He is one of the Six Heroes, is Konoe A. Mercury's husband and Kokonoe's father, and is Ragna's mentor. He is also the progenitor of the Kaka race.

He was voiced by Masaki Terasome in the Japanese version, and by Kirk Thornton in the English version.

Jubei is one of the Six Heroes, Ragna's master, and Kokonoe's father. He battled the Black Beast alongside Hakumen, and played a part in the Ikaruga Civil War. The Kaka Clan were genetically engineered from his DNA. Despite his appearance (he is considerably short and does not come off as threatening, resembling a cat more than either of his descendants), he is a powerful warrior, with numerous characters referring to him as the strongest being on the planet. He works to safeguard his friends in their times of need. Before the start of the series, his partner Nine was murdered by Yuuki Terumi. Jubei seems to have an awkward relationship with his daughter, though the reason why is currently unknown.

Alongside his moniker as the strongest being on the planet, Jubei is sometimes referred to as the One-Eyed Lotus.

During Calamity Trigger, he is shown to be wandering around Kagutsuchi, appearing in the story modes of Ragna, Hakumen, Tager, Litchi, and Taokaka, as well as briefly during the true ending.

Jubei is a two tailed black and white cat who stands upright like a human being. He wears a jacket similar to the Kaka clan's jacket, but with an Eastern motif and a cut in the back where his two tails poke out. He also wears an eyepatch on his right eye, although it is hardly seen due to the game's affinity to flip and reuse the same sprite. His weapon, the Musashi, is carried on his back via a belt strap.

When he was young, he wore Kaka ninja-like orange-yellow garbment.

During the Dark War, he wore samurai-like armor.

Jubei is generally agreeable, sociable and optimistic. Whenever there is a great threat such as Ragna or the NOL around, he always keeps his laid-back attitude and stays relaxed. He makes the best of every situation and is always trying to see the good in everything.

Althrough on the Chimelical Complex Manga, when he sees Terumi at the Cauldron, Jubei appears angry. Probably at the fact that he remembers when Nine was killed by his former ally.

Jubei's powers, or at least the extent of them, have never been shown within the series thus far. However, being one of the Six Heroes, he is likely exceptionally powerful. Claimed by several, amongst them Hakumen and Terumi, to be the strongest creature alive, it is implied that Jubei is nigh-undefeatable in combat as none have dared to engage in battle against him.

His training of Ragna seems to attest to a great power. He wields the Nox Nyctores, the Mucro Somnio: Musashi. With it, he seemed to be able to cleave the shell of darkness that Phantom had surrounded Lambda with during her fight with Nu. Nothing more is known about it. As Jubei's mental faculties do not appear at all to be affected by the weapon in any way, it can be assumed that his mind is very resilient.

He also possesses a unique ability known as Sekkigan, which can create a dimensional rip in time and space. 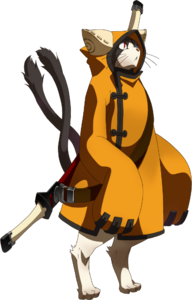 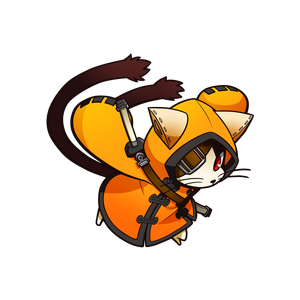 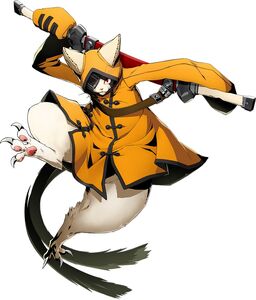