To raise Rudolph as a normal reindeer despite his red nose.

Mitzi is the wife of Blitzen, the mother of Rudolph, the sister-in-law of Comet, Cupid and Dasher, the aunt by marriage of Arrow, a supporting character in the 1998 film Rudolph the Red-Nosed Reindeer: The Movie, and a minor character in it's sequel book Rudolph Saves the Sprites.

She was voiced by the late Debbie Reynolds (who also voices Lulu Pickles and Nana Possible).

She first appears at the start of the film in her home with Blitzen and their newborn son whom they name Rudolph. With encouragement from Mitzi, Rudolph takes his first steps but tumbles into a hay bale to which Mitzi and Blitzen rush over to see if he is okay. Rudolph is unharmed but when he sneezes, his nose lights up in front of his shocked parents.

A few days later, Mitzi and Blitzen give Rudolph a tour of Santa's village where they meet up with Blitzen's brothers Comet, Cupid and Dasher who wish to see Rudolph. Blitzen worried that about what his brothers will think of Rudolph's nose, tries to hide his son but Mitzi convinces him not to. After Rudolph's nose lights up in front of the other villagers, Mitzi and Blitzen take Rudolph and walk away and sing "What About His Nose?" but when the villagers laugh at Rudolph's nose, Mitzi and an angry Blitzen take a confused Rudolph away. Mitzi and Blitzen then take Rudolph to Santa's workshop where they witness the confrontation between Santa and Stormella who closes off her bridge to public and warns that she will cast a storm if anyone crosses it.

A year later, Mitzi and Rudolph along with the other villagers attend the Christmas Eve launch to watch Blitzen and the other Flyers guide Santa Claus's sleigh off around the world and says to Rudolph that Blitzen looks handsome in his harness.

The following year, Mitzi along with Blitzen attend The Junior Reindeer Games to watch a now adolescent Rudolph take part and are angered when he is disqualified after his nose goes off, temporary blinding his cousin Arrow and causing a crash. That night, Mitzi and Blitzen return home and find a note from Rudolph telling them that he has left which deeply upsets them. Later the two along with the parents of Rudolph's friend Zoey (who had left to look for Rudolph) ask Santa for help to find Rudolph and Zoey, to which he sends two of his elves Boone and Doggle to find them. On Christmas Eve, after Stormella casts her storm (after Zoey crossed her bridge to look for Rudolph), Mitzi is seen when Santa considers cancelling his Christmas Eve launch when one of his elves notices a light approaching. They go outside and see that it is Rudolph, Zoey, Slyly, Leonard along with Boone and Doggle. Mitzi and Blitzen greet their son, who apologies for worrying them, and both witness his agreement to use his nose's light to guide Santa's sleigh through the storm and she is last seen welcoming Rudolph and the Flyers returning home and celebrates with the other villagers via singing "Rudolph the Red-Nosed Reindeer".

In this book (which takes place after the film), Mitzi is seen at the family home with Rudolph when Blitzen comes home after going out with Santa and the other Flyers to search for the missing Sprites of the Northern Lights.

Mitzi asks Blitzen if he found the Sprites, to which he says that he didn't, but says that he and the Flyers will look again after a hot breakfast and a quick nap. Luckily, Rudolph and Zoey succeed in finding the Sprites (after they were taken by Ridley to perform a light show for Stormella).

Mitzi has brown and cream fur with black tipped ears (which she passes down to Rudolph) and blue eyes.

In the books, Rudolph the Red-Nosed Reindeer: A Retelling of the New Animated Movie (the film's novelisation) and Rudolph Saves the Sprites, Mitzi's appearance remains the same except she has brown eyes instead of blue ones.

Mitzi with her husband Blitzen and their son Rudolph. 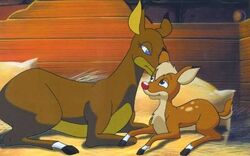 Mitzi with her newborn son, Rudolph.

Mitzi and Blitzen with Comet, Cupid and Dasher.

Mitzi and Blitzen reunite with Rudolph.

Mitzi with Leonard and the Elf Referee whilst watching Rudolph, Santa and the Flyers return.
Add a photo to this gallery

Retrieved from "https://hero.fandom.com/wiki/Mitzi?oldid=1298366"
Community content is available under CC-BY-SA unless otherwise noted.