Miu Iruma is a major character in Danganronpa V3: Killing Harmony and a participant of the Killing School Semester.

Miu is an inventor responsible for creating widely acclaimed products such as "Eye Drop Contact Lenses", though she considers them a failure since she had to work to create them. Despite this, she was still given the title of the Ultimate Inventor (Super High School Level Inventor).

After she successfully participated in the 53rd Killing Game, Miu's memories and past were fabricated by Team Danganronpa as follows:

According to her, Miu used to be a boring, unremarkable girl with no talent at all. One day, she got into a car accident and was close to death, ending up in a coma. After the surgery, she barely managed to regain consciousness, and ever since her head has been full of ideas for all kinds of inventions. She began to believe that the surgery turned her into an "augmented human", explaining how she survived the coma and became an inventor.

Miu's career as an inventor included the commercialization of her "Eye-drop Contacts". However, because her principle motto is "how can you live life when you're so relaxed it's like you’re still asleep", she treats them as a failure.

She is murdered by Gonta Gokuhara's avatar in the Killing Game Simulator in Chapter 4.

Miu is a tall, young woman with an hourglass figure. She has long, strawberry blonde hair and two ahoges. She has icy blue eyes, and her irises, as well as the rings around her pupils, have an unusual, ragged pattern, making them appear slightly mechanical-looking and thus possibly referencing her talent.

Miu wears brown goggles with yellow accents on her head. She wears a modified pink sailor school uniform and a matching skirt, her collar noticeably exposing her cleavage, lacking the cover on her chest. She wears black studded fingerless gloves, with black heeled-boots with gold buttons and buckles on them. She has black straps connected with gold rings attached to her white socks, and over her clothes, gold ring covering her blue ribbon around her collar. She wears a black choker, and two smaller black collars that resemble barbed wire made out of rubber around her neck. On her uniforms collar, she wears a pin of the mouse mascot from Niko Niko Happy.

In the box art, Miu has a metal backpack hanging from her shoulders that has two long metal arms extending from it, lighting a red candle

In the Prologue, Miu wears a white blouse with a messily unbuttoned collar, an orange plaid ribbon sloppily tied into an uneven bow. Her blouse sleeves are rolled up to her elbows, and the shirt is tucked beneath her brown, plaid pleated skirt. She has two orange hairpins on the right side of her bangs. She wears dark teal knee-high socks and black penny loafers.

Miu is described as an oddball, having an overly confident, loud personality and a frighteningly sharp tongue. She considers herself a beautiful genius, and every time she opens her mouth she spews a parade of reckless vulgar remarks and insults, strongly putting pressure on others and looking down on them. In the original Japanese, she even uses the Japanese word "ore-sama" to refer herself, which is considered very arrogant and more traditionally masculine. She also tends to give other characters insulting nicknames.

However, Miu's arrogant personality seems to be only a mask which can drop fairly easily. This often happens when her festival of coarse language and dirty jokes actually get replied to or ignored. Then, her personality quickly changes into a timid weakling, who is terrified of other people being angry with her. Because of this, she has the charm similar to an innocent child.

As an inventor, Miu is skilled but also an eccentric who treats her failed projects with the idea that "I transferred the rights to the company, so it's got nothing to do with me". She has made all kinds of amazing conveniences both inside and outside of the Killing Game, but only deems her inventions as a success when they help the user to perform a task while sleeping (it's possible this is because she suffered from a coma in the past). She also has a habit to make very bizarre, seemingly pointless inventions which are very sexual in nature, including a "Hookup Counter" which tells how many people you've had sexual intercourse with, an "Auto-Puncher that Punches You for Telling Terrible Dirty Jokes", and a "Goin' Commando gun" which can teleport underwear and only underwear. Even seemingly innocent inventions such as Electrohammers and Electrobombs can have dirty innuendos, as in the Japanese version the word "elect" can also be read as "erect". Nevertheless, Miu has also used her remarkable talent to make very useful inventions as well, though in most cases they were concepts created and requested by other students or something she created because she was bored. It is also shown that as an inventor, she firmly believes in science and finds Himiko's insistence in magic and Angie's talk about Atua very annoying.

Created to be the "naughtiest character in the series' history", Miu appears very perverted and openly says bizarre, obscene things during her arrogant mood, meaning almost constantly. She often claims that she just says them to lighten up the mood, but they are very much disliked by the other students. Despite often trying to act dominant and appear sadistic, Miu is also masochistic and into BDSM, and acts very different during her weak-willed moments. Despite her usual arrogant behavior, she seems very uncomfortable if other people actually act very submissive towards her, like when Kaede and Shuichi begged for her help and she begun to sweat nervously and agreed just to make them stop (though she later claimed that the situation turned her on). She has many kinks, some of which she seems to casually admit, including bondage and hot wax (which is also seen in her official art). She also seems way too interested in her own feces. She appears to have some sort of fetish for machines as well and at one point she is seen acting very suggestive towards a computer, and she is also very much attracted to K1-B0. Furthermore, in her last Free Time Event with Shuichi, she tries to give him a pie with her hair in it. She also baked cookies with her fingernails and made chocolate with her blood as ingredients. Disturbingly, she says that she wants the person she loves to eat a little piece of her.

Miu has a very cowardly and self-centered personality, immediately looking for excuses to be absent from the Class Trial after being reminded that she would be executed with everyone else if they reach the wrong conclusion. Also, despite her amazing inventive genius, she is rather dumb when it comes to other matters, being usually ignored by the other characters during the trials. During investigations and trials, she generally spouts out whatever theories come to her mind at the moment without thinking them through, and she can make rather unwise decisions and actions. Because of this, Himiko has described her as "really smart, but also really, really dumb". She is generally not liked in the group, and according to Kokichi, she is the least well-liked student after him. During her trial, many students admitted that they probably wouldn't have been friends with her even if they had met outside the Killing Game.

Despite her timid personality, she genuinely believed her bragging, thinking she can change the world with her inventions and that she is truly important to humanity. In Chapter 4, she begun to break down after finding out about the meteors and became obsessed with the virtual world, seemingly to let herself and the other students escape the harsh reality. In truth, she planned to use it to murder Kokichi and claimed her motive was to escape and make the world a better place after the massive destruction caused by the meteors. However, despite her negative relationship with Kokichi and her generally callous attitude towards the others' lives during the Killing Game, she appeared very uncomfortable with the idea of killing him when the time actually came. When she confronted him, she ignored his usual joking and nervously stuttered with a perpetually sad expression, quickly telling him to just give up and apologizing for what she's about to do. Her face turned more and more sad and stressed as she explained it was her only chance and she had to take it for the world's sake, sincerely appearing remorseful. However, Kokichi later pointed out to Gonta that it was just a poor excuse and she really did attempt to murder him regardless of what she said.

During her Free Time Events, it's revealed that Miu was convinced she was an augmented human as a result of surviving a coma and a surgery, claiming it made her head full of ideas, gave her completely new skills and changed her personality that used to be way more ordinary. She has been shown to act in self-destructive manner at times, believing she cannot be harmed nor killed in the same ways as ordinary humans. During her Free Time Event, she even attempted to disembowel herself with a wrench because she believed that her superhuman powers were literally inside her and she wanted to study them. During her introduction, it's also heavily implied by her own words that she had a tendency to use powerful hallucinogenic drugs in highly stressful situations, to make herself forget all about it. When she much later talked to Shuichi in her usual odd manner, Shuichi felt worried and suspected that she might be on drugs.

In a flashback conversation with Kokichi, Miu was also shown to suffer from trust issues and fear of betrayal after everything that's happened in the Killing Game. Regardless of how great of an advantage her inventions gave to the group, she was completely unwilling to team up with the others to fight Monokuma, believing a betrayal is inevitable. Her Love Suite event implies she might suffer from strong abandonment issues. The aforementioned event and her behavior towards Monotaro might also indicate that she likes children. According to Kaede, Miu may have trouble with communication because she has never had any friends. According to K1-B0, Miu is a good person and has natural innocence hidden deep inside her, despite how she appears on the outside, and it's implied that she acted more like her true self in K1-B0's company. 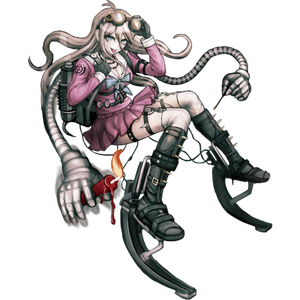 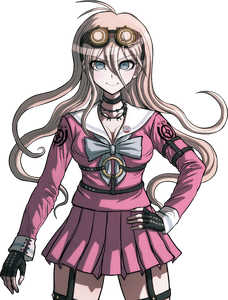 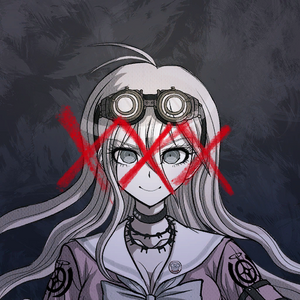 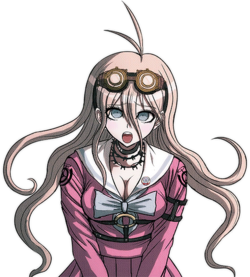 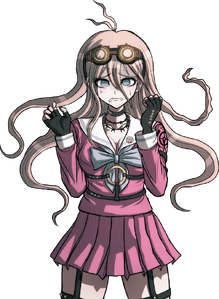