Miyabi Fujiwara (藤原みやび Fujiwara Miyabi) is a character who first debuted in the Data Carddass Aikatsu! 2015 Series and Season 3 of the anime. She is a sexy-type idol using Sakurairo Kaden as her primary brand. She and Yū Hattori are also mascot characters for Aikatsu's official shop.

Miyabi has long, wavy brown hair with the bangs pulled back with curls. She has deep blue eyes and wears two red flower kanzashi in her hair.

Miyabi is a serious and calm girl. She's graceful, elegant, and hardworking. She's sometimes prone to fits of embarrassment when she does something out of character or when someone calls her cute.

Miyabi is first seen in Episode 118, bidding farewell to Himezakura's headmaster Nagaoka as she leaves for Starlight School as part of a student exchange program. Nagaoka advises her to take a good look at Starlight's idols, with the intent that Miyabi will discover her true potential as an idol. Miyabi, having exchanged with Yū Hattori, finds herself in Johnny Bepp's class with Akari Ōzora and Juri Kurebayashi. Miyabi is astonished at how different the idols are at Starlight compared to Himezakura, and is disappointed at not having to find a single girl who is similar to herself. Akari and her friends Sumire Hikami and Hinaki Shinjō stumbleupon Miyabi's situation when they catch her imitating upperclassman Otome Arisugawa in private. Miyabi explains that because of her "rigid" personality, she doesn't feel herself fit to be an idol. Miyabi is then told that she'll be performing at a special concert celebrating the exchange program.

Akari and the others decide to help her prepare - with Sumire helping Miyabi with singing lessons, Akari helping perfect her dancing, and Hinaki promoting the concert on Kirakiratter That night, Miyabi is found by Akari practicing with her naginata, where Miyabi informs her that she's descended from a line of samurai. This leads Akari to comment on why Miyabi speaks so stiffly, and Miyabi is reminded of how she isn't very idol-like. Akari convinces her that uniqueness is a good thing, as it makes her a one-of-kind-idol. On the day of the concert, Miyabi muses that she may have finally found her own Aikatsu, and performs the song Light Pink Day Tripper wearing Sakurairo Kaden's Premium Rare dress - the Hagoromo Princess Coord. Following her performance, Miyabi asks of Akari, Sumire, and Hinaki to call her by her first name rather than "Fujiwara-san." They ask her why she's not wearing Starlight's school uniform, to which Miyabi, self-conscious, replies that the skirt is too short. The others then claim that Miyabi is cute herself, embarrassing her further.

A World Just One Step Ahead

In Episode 119, Miyabi is writing her daily letter to Nagaoka, informing him that she's finally realized why he chose to send her to Starlight. Hinaki questions why she doesn't just email him, and Miyabi reveals she isn't very good at typing. After showcasing her naginata skills, Miyabi heads off to a dojo to practice her routine, but finds herself being followed by a girl named Tomoyo. Tomoyo explains that she's a big fan of Miyabi's and is impressed at how she can be both cool and cute at the same time. Tomoyo exposits about how she wants to wear more cute clothes, but is afraid of embarassing herself. Tomoyo asks Miyabi how to be cute, but the idol is unsure of how to respond. Miyabi meets up with Akari and the others, expressing her regret at not being able to give Tomoyo a reply.

The group decides to do some research in order to find an answer, but are interrupted when upperclassman Sakura Kitaōji escorts Miyabi to Orihime's office, who informs Miyabi that she and Sakura are to participate in an upcoming Yamato nadeshiko festival. Thanks to some choice words from Sakura, who tells Miyabi of how she became an idol, and a speech from Akari, who was congratulated for her one month anniversary as the presenter for "Ozora Weather" (大空お天気 Ōzora Otenki), Miyabi manages to come up with an answer for Tomoyo, and sends it out using Kirakiratter under the hopes Tomoyo will see it. After performing at the nadeshiko fes, Miyabi is greeted backstage by Tomoyo, who surprises her by wearing a cute outfit. Miyabi states that an idol who can give other people courage is amazing, and that she's happy to have become an idol herself.

A Promise to the Future

In Episode 121, Miyabi has three more days at Starlight before she must return to Kyoto. In the other girls' flashbacks reminiscing their time with Miyabi, it's shown that Juri has been teaching her flamenco in exchange for lessons in Japanese traditional dance. Later, Orihime and Johnny inform Miyabi of a special concert commemorating her last day at Starlight, and state that she is free to bring anyone she wishes to perform along stage with her. Miyabi decides to make the concert a competition between her and Sakura, who she deems as a very amazing person. In another flashback, it's revealed that Miyabi has also been teaching Akari how to make origami bunnies. Miyabi and Sakura engage in a practice match with their naginatas.

On the day of the special live, Miyabi surprises everyone by wearing the Starlight uniform, although she is still rather embarrassed about the short skirt. After the live, Sakura is revealed to be the winner, and she and Miyabi promise to one day stand on the same stage. At her send off party, Miyabi makes a speech about how she'll cherish her memories of Starlight and how going there has taught her a lot of things. Akari and the others see her off, with Akari giving her a flower origami and saying they will meet each other again someday. A few days later, Miyabi, now back at Himezakura, watches the Ozora Weather report while holding the origami Akari gave to her.

As a fellow yamato nadeshiko, Sakura and Miyabi share many things in common in terms of their mannerisms and traditional backgrounds. Miyabi considered Sakura to be an amazing person and called her a "true yamato nadeshiko" for her inner strength. Likewise, Sakura appears to hold respect for Miyabi as well.

Otome has heard of Miyabi through Sakura and met her while she was watching the other idols mingle about.

Miyabi and Kokone are best friends and Miyabi's partner in Sweet & Soft☆Nadeshiko. The two first met at a gig the two shared and ended up bonding and becoming closer over the course of more gigs they shared.

Miyabi (みやび, Miyabi ) is a name that is derived from the traditional Japanese aesthetic ideal of the same —Miyabi (雅, Miyabi)— which means elegance, refinement and gracefulness. 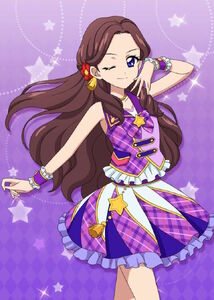 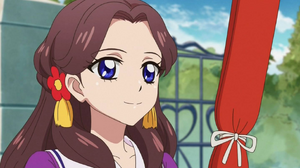 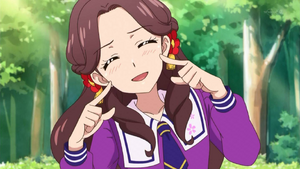 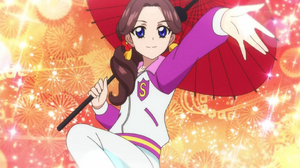 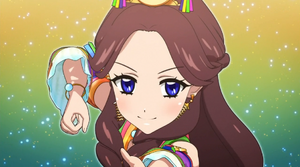 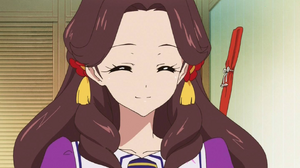 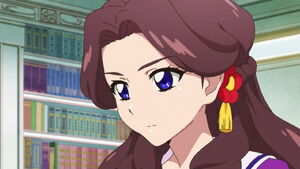 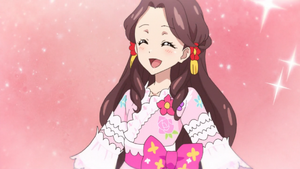 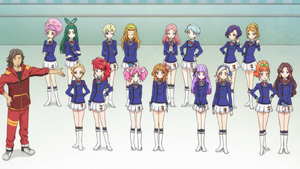 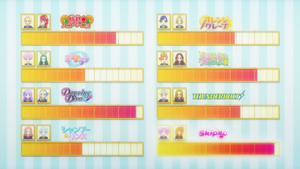 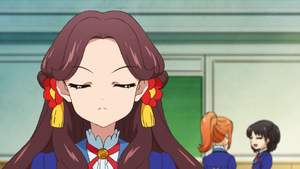 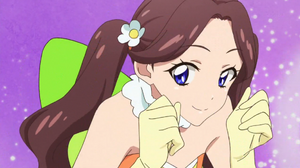 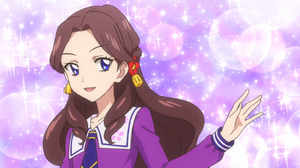 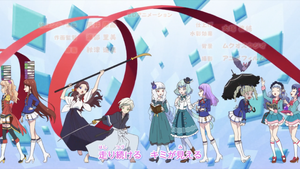 Retrieved from "https://hero.fandom.com/wiki/Miyabi_Fujiwara?oldid=1596498"
Community content is available under CC-BY-SA unless otherwise noted.