Miyabi Ito is a character in the manga Yamada-kun to 7-nin no Majo by Yoshikawa Miki. Ito is a student at at Suzaku high-school with a fascination for the supernatural so when her fellow students Ryuu Yamada, Urara Shiraishi and Toranosuke Miyamura reformed the once debunked Supernatural studies club she was all to eager to join it. Ito walked in on Yamada and Shiraishi kissing and assumed that club was just a front for them to fool around with each other and left in a rage. Later Ito started spreading rumors about the club so Yamada contacted her to explain the club was formed to investigate a power he and Shiraishi possessed to swap bodies with others by kissing. Ito did not beileve the outlandish claim so Yamada demonstraited the ability on her, kissing her and then swapping bodies with her. Yamada knocked out Ito in his body to keep her from getting into trouble and then went about posing as her to undo the rumors, when he returned though he found Ito had left with his body. Ito have been having bully problems and wanted to use the opportunity in Yamada's body to beat up the bullies. As it turns out Yamada's skill as a fighter was not physical and Ito as Yamada was easily dispatched by the bullies she confronted, to save Ito, and his body Yamada beat pu the bullies in Ito's body, establishing her as stronger than she looked and permanently keeping her safe from bullies. After the rather rough meeting Ito gladly rejoined the club and was eager to discover the source and limitations of the powers. The Supernatural Studies Club soon discovers that Yamada and Shiraishi were two of seven witches in the school. The club sought to uncover the identity of each witch at school and the nature of their powers. Thanks to Ito spearheading experimentation the club soon finds that Yamada does not have the power to body swap like Shiraishe but rather can copy another witch's power by kissing them.

Ito was a supernatural studies buff even before joining the club, however most of her research is about hoaxes and urban legends and she knows very little about actual witch powers. What Ito lacks in knowledge of real-world supernatural abilities she more than makes up for in know-how from studying the occult, her directives have allowed the club to map out the limitations and augmentation possibilities of each witch's power. Though she can be highly over emotional she is quite clever and has highly competent organizational skills. 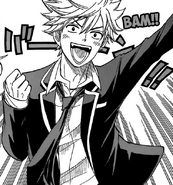