Wandering
Helping others
Perfecting his skills

Help others
Perfect his skills

Miyamoto Usagi is the main protagonist of the titular Usagi Yojimbo comic series and a recurring ally of the TMNT. He is a skilled swordsmen of the land and son of a village headman.

He was created by Stan Sakai.

Usagi was taken to learn the arts of war in a bushido school, separating him from his childhood friends. He was later assigned to be the retainer of a local daimyo Lord Hitune. Usagi had to leave his village but return to say farewell and found his friend Kenuichi drinking at an inn. Kenuchi decided to stay in the village to take up the position after Miyamoto's father died. Lord Hikiji assasinated Lord Hitune in order to claim Japan as his. Usagi failed his task to protest his lord and obtained his lord's head to prevent it to fall in the enemy's hands.

Usagi is a highly skilled swordsman and one of the best in the land.

Usagi was born the only son of a village headman. His two childhood playmates were Kenichi, with whom Usagi would have a less-than-friendly rivalry his whole life, and Mariko, one of the reasons for the boys' rivalry. Eventually the trio went their separate ways when the boys were sent to be trained as samurai in the Dogora school of Bujitsu. However, on the trip there the boys witnessed a confrontation where a gang of arrogant Dogora students attacked a lone traveler named Katsuichi. Katsuichi had left the school years ago, dissatisfied with the poor calibre of the students. In spite of their numerical advantage, the gang was quickly defeated by the sensei's unusual, but definitely effective, technique. Although Kenichi was unimpressed by the display, Usagi pursued the departing sensei to petition him to become his student. Katsuichi initially refused, but relented when Usagi stood outside his home day and night through unpleasant weather long enough to convince the teacher of his determination.

For years, Usagi was the exclusive student of Katsuichi-sensei, and although he proved a mischievous pupil who got into various misadventures, he also excelled at his studies to become a formidable warrior. One of those misadventures involved a young Usagi stealing a dying soldier's wakizashi while walking through a battlefield with his teacher. Fraught with guilt over the theft, Usagi began seeing the now dead soldier in numerous situations, at one point having a nightmare that involved Katsuichi morphed into the soldier. Upon his return to the battlefield to return the sword to its rightful owner, Usagi was caught by adult samurai and accused of theft. Instead of summarily executing the young rabbit, they instead began the process of cutting his hand off. Before a blow could be struck however, Usagi's future lord, Mifune, intervened on his behalf, and upon sensing the rabbit's honorable nature, let Usagi go.

At the end of his training, Katsuichi brought Usagi to a fencing tournament hosted by the Dogora school. Usagi won the tournament, his final match being against his old "comrade" Kenichi, who by then was the top student of the Dogora school, and earned his own daisho: the katana named Yagi no Eda (en: "Willow Branch") and the wakizashi named Aoyagi (en: "Young Willow"). The region's daimyō, Lord Mifune, was observing the contest and was impressed with Usagi's skill enough to offer him a position as a retainer. Before leaving to enter Mifune's service, Usagi returned to his village for a final farewell, where he found Kenichi had been staying at an inn in drunken despair, having sworn to leave the school due to his failure to win the tournament, but too ashamed to return home. Together they returned to their village to free it from brigands that were threatening it. Kenichi decided to stay, and would eventually become headman upon Usagi's father's death, which comforted Mariko somewhat against the loss of her other dearest friend. Kenichi and Mariko later married; however, before leaving the village, Usagi and Mariko had a romantic encounter that resulted in a son, Jotaro, whose parentage was hidden from Usagi for years.

In his term of service, Usagi rose to become a trusted personal bodyguard of his Lord and his family. That stable career was destroyed when a villainous rival lord, Lord Hikiji, sent ninja to assassinate the Mifune family. In the assault, Mifune's wife and son were murdered, and Lord Mifune waged war on his rival in revenge. That war concluded at the battle of Adachigahara, sometimes referenced as Adachi Plain, where Mifune had the upper hand until Buichi Toda, one of his subordinate commanders, betrayed him and joined with Hikiji. Usagi's friend and immediate superior, Gunichi, then fled the field upon seeing that the battle was lost. Lord Mifune was killed by an arrow barrage; Usagi performed his final duty, which was to escape with his lord's head to prevent the enemy from displaying it. As he fought free, he had his so far only personal confrontation with Hikiji, which left him with the distinctive arched scar over his left eye. Usagi escaped into the forest, buried Lord Mifune's head, and eluded pursuit by Hikiji's forces. By saving Lord Mifune's head from desecration, Usagi felt he had atoned for the disgrace of losing the battle. Otherwise, he would have felt compelled to commit seppuku. Usagi has since avenged his master's death upon both Toda and Gunichi, although Hikiji remains beyond his reach.

Now a ronin, Usagi traveled the backroads of the region, making a living as a yojimbo for hire. In the course of his "warrior pilgrimage", he made deep friendships with many, including the young Lord Noriyuki of the Geishu Clan and his valiant bodyguard Ame Tomoe , the cynical rhino bounty-hunter Murakami Gennosuke , the brilliantly astute Inspector Ishida, the cat kunoichi Chizu , and the sly street-entertainer/petty thief Kitsune .

Usagi makes recurring appearances in the 1987 Teenage Mutant Ninja Turtles cartoon, voiced by Townsend Coleman. He lives in Feudal Japan on an alternate Earth where other animals and not humans have evolved into the dominating species.

Usagi makes his debut in Season Two of the 2003 Teenage Mutant Ninja Turtles series, voiced by Jason Griffith. He first appears in "The Big Brawl, Part Two", where he comes to Leonardo's aid when the Turtle was attacked by shadow monsters. He addresses Leonardo as kappa and the two master swordsmen forge quite a camaraderie. They later become competitors in the Battle Nexus Tournament, both fighting with honor and moral purpose. He expresses concern over Leonardo when he was poisoned by a dart, which was fired by the Ultimate Ninja himself, the power-hungry son of the Daimoyo. Wanting to help his new friend, he had Donatello allow him to use knowledge in basic healing abilities to try and counteract the venom within Leo's system. Usagi went on to make several other appearances, including as Leonardo's guide when the turtle was accidentally sent to his world, and as an attendant of the wedding between April O'Neil and Casey Jones.

Usagi appears in the fifth and last season of Teenage Mutant Ninja Turtles, voiced by Yuki Matsuzaki. The Turtles are whisked away to his dimension (in the episodes Yojimbo, Osoroshi no Tabi and Kagayake! Kintaro), where he forges a close friendship with them; especially with Leonardo, as they are both levelheaded, quick-witted and highly skilled in "the ways of the sword."

In his home dimension (presumably an alternate reality of Feudal Japan), Usagi clashes with his archenemy, the wolf-demon Jei, who escapes from him yet again. He comes across a ransacked village and meets an extraordinary child by the name of Kintaro. He is tasked with protecting the boy from Jei until he realizes his own inherent superhuman abilities at the sacred Temple Palace. While setting camp, Usagi is ambushed by the Ninja Turtles who are controlled by Jei's evil magic. He welcomes the newcomers and explains his history as a samurai of great strength and skill. Disguising themselves, Usagi and the Turtles try and pursue Jei's Sumo Kuma but are discovered and fall off a cliff.

In a haunted forest of yokai spirits, Usagi helps the Turtles fend off shapeshifting spirits that capture Michelangelo and Raphael. He appeases them by offering a carrot as a peace offering. Upon entering a cave full of giant spider webs, he is compelled by the voice of his good friend Akemi who is, in fact, a spider.

Usagi in the 2003 version of Teenage Mutant Ninja Turtles 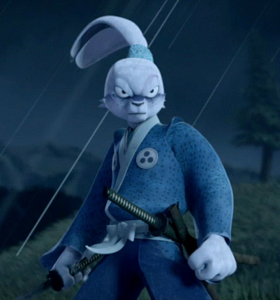 Retrieved from "https://hero.fandom.com/wiki/Miyamoto_Usagi?oldid=1616430"
Community content is available under CC-BY-SA unless otherwise noted.